THE INFAMY of the wall in Košice segregating the city’s Roma community has made it to Brussels with the European Commissioner for Education, Culture, Multilingualism and Youth, Androulla Vassiliou, criticising city officials and warning that the wall is at odds with the city’s title European Capital of Culture 2013. 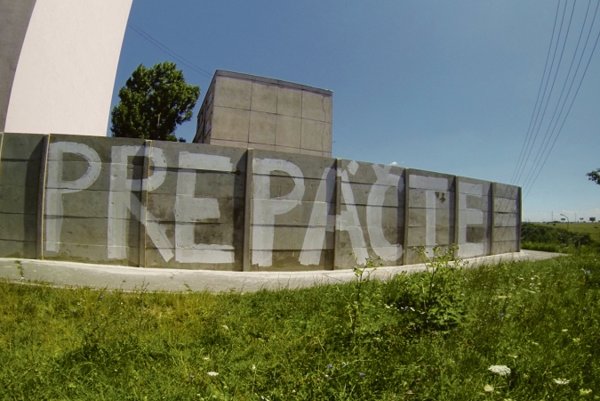 THE INFAMY of the wall in Košice segregating the city’s Roma community has made it to Brussels with the European Commissioner for Education, Culture, Multilingualism and Youth, Androulla Vassiliou, criticising city officials and warning that the wall is at odds with the city’s title European Capital of Culture 2013.

While Richard Raši, the mayor of Košice, responded that the construction of the “segregation wall was an unpleasant surprise for us”, Rudolf Bauer, the official who is responsible for Západ, the part of the city where the wall was built, said that Vassiliou based her opinion on incomplete information. Yet, Dionýz Slepčík, the mayor of Lunik IX, a densely-populated housing estate inhabited mostly by Roma, said he has not registered complaints from the Lunik inhabitants yet.
Meanwhile, a big ‘Prepáčte’ (Sorry) was painted on the wall itself. A couple weeks later someone quickly removed the inscription.

“I strongly believe that the construction of physical barriers represents a breach with the values on which our European Union is founded, notably respect for human dignity and human rights, including those of people belonging to minorities,” reads the letter dated August 13 that Vassiliou sent to Raši.

The wall, which purportedly prevents the passage of Roma between the Lunik IX and Lunik VIII housing estates, had a €4,700 price tag, and was built in response to complaints by locals about what they called frequent petty theft and disorder in the parking lot by the Lunik IX neighbourhood. The Košice City Council stressed that it never approved the construction of the wall and thus considers it an illegal construction, the Sme daily wrote.

According to Vassiliou, any initiative which results in segregation of populations is at odds with the very essence of the European Capital of Culture title, which “seeks to highlight the richness and diversity of European cultures and to promote deeper mutual understanding between European citizens”.

Bauer also wrote a letter to Vassiliou claiming that “there is in no way an anti-Roma or segregation wall” and that the city borough used what he called tiny construction to solve two problems: the lack of parking lots and the security and protection of the property of inhabitants in Lunik VIII since they had many complaints about thefts. According to Bauer, the wall cannot bother anyone because there is no route leading there and even after its construction people can still pass between the two housing estates in other ways, the SITA newswire reported on August 20.

Bauer also denied the claim that the construction is illegal by saying that it is a fence, for which no construction permit is needed and that the borough reported plans to build it in line with the law, Bauer said, as quoted by SITA. The new wall prompted human rights watchdogs to note it will not improve relations between Roma and the majority inhabitants of the city.

Slovakia has as many as 14 similar constructions, including in the eastern Slovak towns of Michalovce, Ostrovany and Šarišské Michaľany. For example, residents of the Východ neighbourhood that directly adjoins the Roma settlement of Angy Mlyn in Michalovce, raised €3,000 themselves to build the concrete barrier that forces Roma from the settlement to take a longer route to the town centre instead of a short cut through the neighbourhood.

Then there is a 150-metre wall in Ostrovany, which the local government built in 2009 to protect houses and gardens neighbouring the Roma settlement. Another concrete wall grew to keep the Roma away from certain dwellings in the city of Prešov. That eight-metre wall prevents residents of a Roma settlement from taking a short cut across a green area into the city.