SLOVAKIA spent a significant part of the 20th century under totalitarian regimes, which is reflected in some of the architecture of the period. Such architecture remains controversial: though the buildings may have been built by oppressive regimes, the architecture itself was sometimes exceptional. 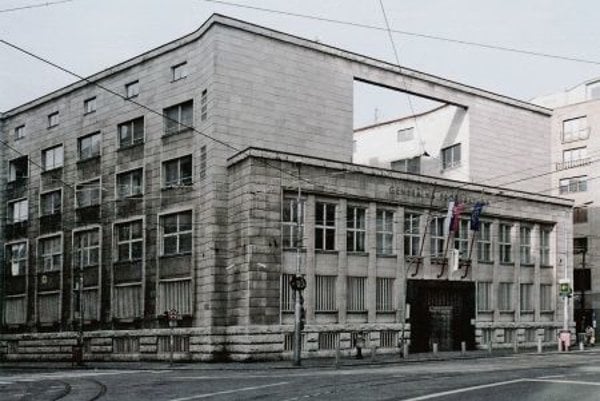 SLOVAKIA spent a significant part of the 20th century under totalitarian regimes, which is reflected in some of the architecture of the period. Such architecture remains controversial: though the buildings may have been built by oppressive regimes, the architecture itself was sometimes exceptional.

A collective of architecture experts led by Henrieta Moravčíková from the Department of Architecture at ÚSTARCH SAV examine the influence of authoritarian regimes on architectural production in the Slovak-English book Moderné a/alebo totalitné v architektúra 20. storočia na Slovensku (Modern and/or Totalitarian in the Architecture of the 20th Century in Slovakia).

When introducing the book in Žilina, where one of the buildings analysed in the book, the Representation House, is located, the city’s vice-mayor protested against this selection, arguing that it was not built during a totalitarian regime.

“[This vice-mayor] … is lucky enough that he or she does not realise that this building was constructed during the Second World War, [and] that the initiative to construct it arrived from the Hlinka Slovak People’s Party and with an abundant contribution from revenues of the sale of confiscated Jewish property and under the guardianship of the then fascist Slovak regime,” said Moravčíková at the book’s launch in late October.

The difficulty inherent in examining 20th-century totalitarian architecture is partly what motivated Moravčíková and her colleagues when preparing both the book and an exhibition of the same name held in late 2012, both of which illustrate the controversial nature of this theme.

“Our aim…was to draw attention to the fact that even in non-democratic social conditions it is possible to create exceptional works of architecture,” Moravčíková wrote in the introduction of the book. “We concentrated exclusively on works of exceptional architectural quality, or of exceptional urban planning, which at the same time illustrate what the characteristic typology and formal signs of their eras were, as well as the ties to international architectural discussions.”

The team selected seven works, five of which are in Bratislava: the Branch Office of the Czechoslovak National Bank (currently the seat of the General Prosecution), Námestie Slobody (Freedom Square), the SNP Bridge, the sprawling Petržalka housing estate and the Slovak Radio building. The Representation House in Žilina and the Socialist town of Nová Dubnica are also discussed.

It was not the authors’ intention to rate 20th century totalitarian buildings or architects, but rather to trace similar characteristics in the implementation of projects in different localities.

The publication’s texts came from two parallel research projects: the international project Architecture of Totalitarian Regimes of the 20th Century in Urban Management constructed a European cultural route centered on the architecture of authoritative regimes in southern and eastern Europe. The research project, Differentiated Typology of Modernism, a theoretical basis for maintenance and conservation of works of modern architecture, focused on the specific contexts of Slovak architecture during this period.

In addition to Moravčíková, the book’s other authors include Matúš Dulla, Peter Szalay, Mária Topolčanská, Katarína Haberlandová and Marián Potočár. The book is accompanied by period photographs and urban and other documents, as well as current photographs of the buildings by Olja Triaška Stefanovič.

As Moravčíková concludes in the introduction, the book “does not offer firm definitions or any sweeping conclusions or recommendations. It poses questions and searches for answers… It aims to be a contribution to a discussion, or more accurately, simply to stimulate discussion in the first place.”

The book was published as the first publication in a planned series of editions called ‘(Re)Thinking Architecture’.