CHOOSING bigos to represent traditional Polish cuisine was the easy part; preparing the dish, however, can be a time-consuming endeavour. 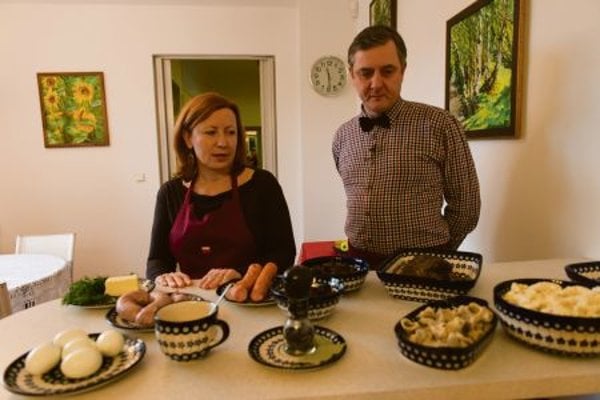 “If you ask any Pole what is our national dish, they would say bigos,” Tomasz Chłoń, the Polish ambassador to Slovakia, said while gazing at his wife, Jolanta Chłoń, who was slicing different kinds of meat for the dish, which if done properly can take several days to prepare.

Jolanta Chłoń readily shared the secret of bigos, suggesting that it is primarily “a lot of work, involving a lot of ingredients”. But the benefits of the dish outweigh the time it takes to prepare it, she suggested: “Once you have made bigos, you can serve it to a lot of people, while the beauty of bigos is that everybody can decide what they want to have in it.”

However, when looking at the array of ingredients, including different types of meat and sausage, as well as cabbage, prunes, pepper, juniper berries, mushrooms, onions and a variety of spices, adding even more ingredients would seem impossible.

Certainly, bigos is not the only dish Ambassador Chłoń selected for the Cooking with Ambassadors programme, prepared by The Slovak Spectator and TV Sme.

The dumplings known as pierogi are also quite representative of Polish cuisine. According to the ambassadorial couple, pierogi come in about 50 variations, stuffed with different types of meat, cabbage, mushrooms and cheese, just to name a few ingredients. There are also sweet varieties of this popular dish.

“In Warsaw and other cities in Poland, you can now find restaurants that specialise in pierogi called Pierogarnia,” said Chłoń, adding that the dish would be served at any Polish diplomatic reception around the world. “This pierogi culture is becoming more visible even in the United States.”

Similar to their southern neighbours in Slovakia, Poles have a passion for meat, especially the smoked variety, which Chłoń suggested is a deeply-rooted tradition.

He shared a folk tale to illustrate how this passion could take a fatal turn: “We had a prince in medieval times who fasted for 40 days and after the fast ended, he ate so much meat that he died.”

Poles have a myriad of ways to smoke meat and sausages, some of which utilise different types of wood: “that’s why the flavours differ from region to region”, Chłoń said, explaining that the main difference between Polish and Slovak sausages is that in Poland people do not put pepper in sausage.

“We are a sea nation, so one would think that we eat lots of fish, and we do eat some, but fish is not as popular as it should be,” Chłoń said, adding that herring is still very popular, especially for Christmas or Easter, while fish in general is now becoming more visible on Polish tables.

Yet, Polish cuisine is much more than just meat and pierogi, the ambassador said, explaining that different nations, including France, Italy and Turkey, have added their colours to Polish plates.
“Polish cuisine has been international for ages,” said Chłoń, adding that Lithuanians, Ukrainians, Byelorussians, Russians, Jews, Germans and even Scots and the Dutch have made their mark, “so it’s like the European Union”.

For example, thanks to the Italian influence, Poles have more vegetables in their cuisine, said the ambassador.

Yet, Chłoń does not see any dramatic differences when comparing the cuisines of Poland and Slovakia. A number of similarities exist between the culinary traditions of both countries, for example, the sheep-based products prevalent in the mountain regions.

Do Slovaks and Poles know enough about each other? Chłoń suggested that the nations should know more: “Let’s go to Bardejov [eastern Slovakia] for lunch if you live in Krakow, or if you live in Košice, then go to Krakow or to Zakopane to have a nice potato pancake, which Hungarians know nothing about.”

The ambassador suggested that one of the reasons why people in both countries think they know enough about each other is because they assume “they are similar to us. Maybe we are similar, but at the same time we have different traditions, so why not get to know each other better?”