BACK in 2009, amid protests by political ethics groups, Štefan Harabin went straight from the Justice Ministry, controlled by the controversial Movement for a Democratic Slovakia (HZDS), to lead the Supreme Court as well as the Judicial Council, a body which oversees the functioning of the judiciary. Five years later, political ethics watchdogs, artists, journalists and other public figures, are on alert once again as Harabin seeks re-election. 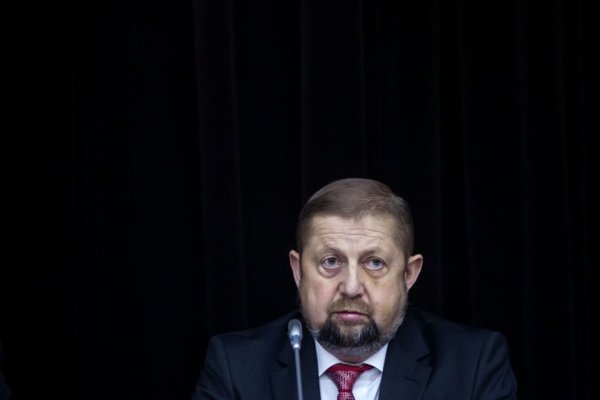 BACK in 2009, amid protests by political ethics groups, Štefan Harabin went straight from the Justice Ministry, controlled by the controversial Movement for a Democratic Slovakia (HZDS), to lead the Supreme Court as well as the Judicial Council, a body which oversees the functioning of the judiciary. Five years later, political ethics watchdogs, artists, journalists and other public figures, are on alert once again as Harabin seeks re-election.

Harabin had earlier suggested that he might withdraw from the race to the benefit of Jana Bajánková, nominated by Justice Minister Tomáš Borec, but just days before the May 19 vote such a turn seems unlikely. Thus, the race will feature three candidates, with Zuzana Ďurišová, proposed by the For an Open Judiciary (ZOJ) group critical of Harabin, also in contention.

President-elect Andrej Kiska, who earlier had suggested he would never appoint Harabin if he were elected, on May 14 called on the members of the Judicial Council, who elect the next court president, to take a responsible approach, as their decision “will influence the character of the judiciary”.
A moral and professional authority should manage the Supreme Court, said Kiska, adding that the judiciary is one of the biggest problems in Slovakia and thus the council members will have to choose between continuity and change.

“On Monday they either start changing the judiciary or they will spoil the chance for change,” said Kiska, as quoted by the SITA newswire, adding that people want change, but without being specific about any of the candidates.

Media speculated that Harabin, whose term ends on June 23, after the late March presidential election run-off that saw Prime Minister Robert Fico lose to philanthropist Kiska, rushed to set the date for the elections for May 19 in an apparent attempt to secure re-election before Kiska takes office. Yet, Via Iuris, a judicial ethics watchdog, is saying that President Ivan Gašparovič, whose term elapses on June 15, cannot make the appointment but will have to leave it up to Kiska as the post becomes vacant under Kiska’s official term. Via Iuris based its claim, which also pertains to the appointment of the judges of the Constitutional Court, on a legal analysis signed by a number of legal experts.

“If Ivan Gašparovič appoints them anyway, he would disrespect the Constitution of Slovakia,” the Via Iuris statement provided by media representative Miriam Kejzlarová reads.

Meanwhile, as part of his presidential campaign, Fico himself said that he would not recommend Harabin to run for re-election.

When responding to Fico’s statement, Harabin told the Sme daily that “we are friends with the prime minister. It’s OK”.

Now, however, political ethics watchdog Fair-Play Alliance (FPA) and a number of artists, journalists and public figures are calling on Fico to use his authority and the strength of his political mandate to act in a way “that the judiciary is finally freed from the influence of Štefan Harabin or persons with a similar ethical or value system or a similar perception of the judiciary”.

FPA launched a campaign called ‘Mr Prime Minister Stop Harabin’, arguing that the incumbent has become a symbol of what the organisation calls an ailing judiciary and a critical lack of trust among Slovaks in the judiciary. Looking at the distribution of power in the Judicial Council, without the votes of the nominees of the ruling party Smer, the new head of the judiciary cannot be elected, FPA argues.

“The state must guarantee the rule of law for the citizens and the government and parliament are responsible for making their nominees to the Judicial Council fulfilling these values in practice,” FPA director Zuzana Wienk said in a statement.

A letter that FPA drafted for the prime minister lists several reasons why Harabin is unacceptable, including the argument that the general prosecutor has repeatedly confirmed that “he had a friendly phone call with the representative of the Albanian drug mafia in Slovakia”.

FPA also objects that during his career Harabin was switching between judiciary and political functions “while he linked his political career with a party, which brought Slovakia to international isolation and participated in violating the constitution and trampling on democratic rights” referring to Vladimír Mečiar’s HZDS, which nominated Harabin as justice minister in 2006.

FPA also objects that Harabin in his posts failed to support measures to strengthen the fight against corruption and to reform the judiciary. As Supreme Court chairman, Harabin refused to introduce random assignment of files to judges despite the fact that it was requested by law, FPA said. Harabin was also supportive of hundreds of judges who collectively sued the state over what they called wage discrimination, an act which FPA calls immoral.

FPA also pointed out that Harabin has been suing the media for libel while demanding inappropriately high damages, arguing that such lawsuits were intimidating and contributed to the erosion of the freedom of speech.

According to FPA, Harabin attacked his critics in an unacceptable, aggressive and even vulgar way that is incompatible with ethics and decent behaviour, with the most publicised statement of his being: “you will go to jail, bastard” that he addressed to former justice and interior minister Daniel Lipšic. Harabin treated his critics within the judiciary abusively when he transferred them beyond their long-term specialisation, he did not approve working trips or educational activities, FPA claims.

Meanwhile, FPA also called on the media to report in detail on the candidates so that the public gets a better idea of their values and professional background.

“With her work, personal attitudes and private life she has proven that she is a personality with high professional and moral credibility,” ZOJ President Katarína Javorčíková said of Ďurišová, as quoted by SITA.

Ďurišová never changed her attitudes, not even under harassment, Javorčíková said, adding that “she was able to criticise the current conditions within the judiciary openly and also in front of the public and the media”. As director of the Judicial Academy she demonstrated her ability to lead a team of people, Javorčíková added.

Ďurišová signed a declaration of judges critical of conditions within the judiciary, particularly limitations of the judges’ freedom of expression, called “Five Sentences”. Along with three judges she filed with the Constitutional Court a constitutional complaint in which they demanded to check the legitimacy of installing Harabin to the post of the chairman of Supreme Court, the Trend weekly reported in 2009.

Ďurišová graduated from the Law School of Comenius University in Bratislava in 1974 and started working as a company lawyer for ZPA Bratislava company where she stayed until 1987. Between 1987 and 1991 she worked in state arbitration after passing the arbitration exams in 1988. Ďurišová then moved to the Federal Office for Competition where she stayed between 1991 and 1992. Since 1992, she has served at the Supreme Court: first as member of the business collegium and since 2003 as chairwoman of the senate.

Harabin said in an earlier interview with Sme that it does not matter to him whether he wins the race or his “friend Bajánková”. Bajánková is believed to be a close collaborator of Harabin in the Supreme Court, according to Sme.

According to Borec, Bajánková, the head of the civil legal college and a member of the Judicial Council, is a candidate with a real chance of succeeding in the upcoming elections.

“I view it as an advantage that Bajánková will be able to communicate with all Supreme Court judges in a normal, professional manner,” said Borec.

Bajánková argued that the level of trust she has among the judges is a good basis for offering the “Supreme Court a new style of management for the sake of increasing the credibility of the institution”.

Bajánková is convinced that it is necessary to focus on effective organisation of work and mainly the unifying nature of the activities of the Supreme Court in order to strengthen legal certainty in Slovakia, SITA reported.