ANNOYING travel from government offices to postal offices and back, all for a government stamp called a “kolok” to prove payment for that office’s service will be a thing of the past as starting next year a new electronic stamping system goes into effect. Stamps in the current form will be used until the end of 2014 when the state will introduce a new electronic stamping system which allows citizens to buy an e-stamp directly in the office. By the end of the year, some payments for government services will be available also via mobile phones. Current paper stamps will be available until the end of November and valid until the end of the 2014, the SITA newswire reported. 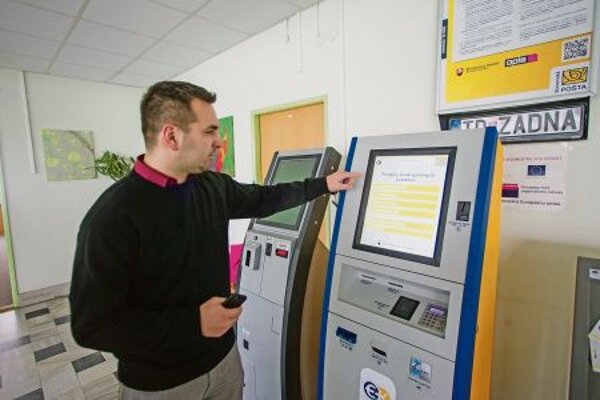 ANNOYING travel from government offices to postal offices and back, all for a government stamp called a “kolok” to prove payment for that office’s service will be a thing of the past as starting next year a new electronic stamping system goes into effect.
Stamps in the current form will be used until the end of 2014 when the state will introduce a new electronic stamping system which allows citizens to buy an e-stamp directly in the office. By the end of the year, some payments for government services will be available also via mobile phones. Current paper stamps will be available until the end of November and valid until the end of the 2014, the SITA newswire reported.

“We are living in a period which is dynamic, technological development is significant and [this situation] demands that government come up with new solutions,” Finance Ministry State Secretary Radko Kuruc told the press on October 9.

The new system will also affect stamps on some consumer products such as alcohol or cigarettes. As of January, customers will be able to check a code on the stamp with their mobile phone and find out whether authorities register the bottle of alcohol or pack of cigarettes and if the products are legal. Stamps will also provide data about, for example, the weight of a cigarette pack or the amount of alcohol in the bottle, according to the Sme daily.

Rastislav Machunka, head of the Federation of Employers’ Associations (AZZZ) welcomes the changes.

“Any modernisation which is beneficial for citizens means also a benefit for businessmen,” Machunka said, as quoted by the Hospodárske noviny daily. “What we can criticise is that it is delayed.”

Starting in 2015 anyone who needs a government payment stamp will be able to buy it in a machine kiosk, and the machine will automatically recognise the type of stamp needed for any specific type of document. Payments are possible in cash or with a credit card and the machine will issue a ticket confirming the purchase. Currently, the Slovak Post Office (SP) which runs the whole project installed around 100 such kiosks.

“We should have covered all offices of public administration and courts by the end of year,” SP head Tomáš Drucker said, as quoted by Sme.

Initially, however, employees of most state offices will have the terminals to pay in electronic form; only later will kiosks be introduced. By the end of the year, 270 of them will receive both cash and pay cards and 70 card-only, Sme reported.

The introduction of electronic stamps will result in higher economical effectiveness, comfort for citizens and higher security for the whole system. It will also provide more accessible data about payments for government services and shed light on the cash flow in offices, Drucker told SITA.

“The state will be able to evaluate running of offices in Slovakia more effectively,” Education Minister Peter Pellegrini said, as quoted by the TASR newswire. “Before all, however, the citizens’ quality of life will increase because they will not have to get over various practices before going to the office anymore.”

The system will be also cheaper for citizens since the post will refund the full price of an unused stamp, while currently it keeps 5 percent of the stamp’s value as a service charge, SITA reported.

“The number of sold e-stamps during the test run of the new payment system has proved to us that there is a high demand of citizens for this service,” Andrea Pivarčiová of SP told the Trend economic weekly in June. “Customers also welcomed that they can buy e-stamps directly in the office and pay for this service by credit card.”

The new stamps resemble a cash bill and SP has a monopoly for issuing them, which means that the regulatory authority set its revenues from the whole system. The project will draw €5.3 million from EU funds and SP will cover the rest of the expenses in an amount of €6.7 million, Trend wrote.

When deciding about which firm will introduce e-stamps the state did not announce a competition and signed the contract directly with SP, Institute for Economic and Social Studies (INESS) analyst Martin Vlachynský told Sme.

SP claims that its profit from the new e-stamps system will be lower than in previous ones, according to Sme. The yearly expenses on the current system reach approximately €9 million while the new system will cost just around €8.5 million per year. Those expenses will cover the operation of the system. There is an initial investment of €11 million for the related technology, SITA reported.

The contract for operating the system will be effective for 10 years and all SP’s expenses on the system should be covered by income, according to SITA.

“We will not profit on this system for sure,” Drucker told Hospodárske noviny.

To produce new stamps for alcohol and tobacco products the state constructed a new press in the town of Kremnica for €6.5 million which will be operated by state-owned Kremnica Mint. It should print the first stamps before the end of October, according to Sme.

The data from new stamps will be continuously integrated into the state information system after the press in Kremnica makes them. A web site containing information about alcohol and tobacco products is currently under construction. Firms using those stamps can order their new version starting in November and will be allowed to use old stamps until March 31, 2015.

The price for 1,000 of new stamps is €1.95 thus they will be more expensive than those currently in use. On the other hand, the new system should make fabrication of stamps and tax evasion more difficult which means that investment can pay off through higher incomes from taxes.

It is hard to predict whether higher price of new stamps will affect prices of cigarettes, according to Klára Priecelová of Imperial Tobacco.

“We presume that our costs will be connected with obtaining and operation of reading devices, software and personal expense,” Priecelová said, as quoted by Sme.