ENERGY-intensive businesses are continuing to complain about high energy prices in Slovakia. While they see them as endangering their competitiveness, they also call for a comprehensive debate and better assessment of impacts regarding changes to regulated aspects of electricity prices. Prime Minister Robert Fico, to whom the business community sent an open letter warning about high electricity prices, has indicated some relief for energy-intensive businesses. For example, these businesses, with the exception of Slovenské Elektrárne (SE), the operator of nuclear power stations in Slovakia, could be excluded from the duty to pay into the National Nuclear Fund. SE is an opponent, claiming that it is not responsible for the historical debt for nuclear energy. 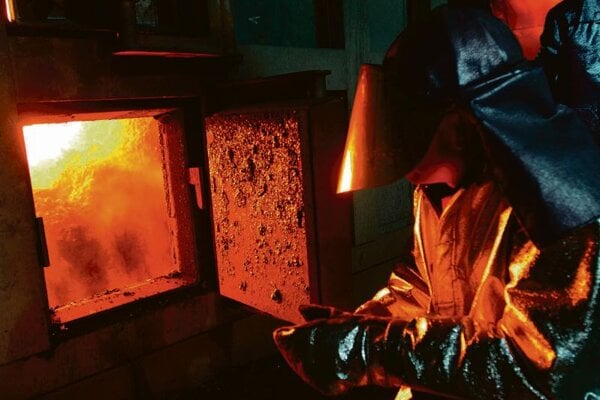 “We have been complaining a long time that the electricity prices in Slovakia for industrial producers are some of the highest in Europe,” Marian Jusko, head of the National Union of Employers (RÚZ), said, as quoted by the TASR newswire. “High electricity prices are exceptionally sensitive for Slovak industry and the solution is especially urgent. The reason is that contrary to other European countries, industry in Slovakia has a bigger share of gross domestic product.”

Representatives of businesses and employers’ associations, as well as chambers of commerce of the US, Germany, France, the Netherlands, Austria, Italy, and Sweden sent the open letter to PM Fico on October 23. In addition to warning about high electricity prices, they called for an extensive discussion about the setting of the regulatory framework. They also recalled that while the Economy Ministry was assigned to outline proposals to ease the burden of high electricity by the end of September, it has not yet done so.

The charge for operating the national grid, one of six components making up the final electricity price, creates the biggest headache for businesses. While they already think the increase this charge in Slovakia has been too steep and not systematic, the Regulatory Office for Network Industries (ÚRSO) increased this charge by €2 to €21.82 per megawatt hour as of August 19.

The analytical and consultancy company Energy Analysts pointed out in its position paper elaborated for RÚZ that this charge increased more than eight times between 2009 and 2014, from €2.72 MWh to the current €21.82 MWh.

Energy Analysts also pointed out that Slovakia is exceeding its plans in meeting the generation of electricity from renewable energy sources (RES). The growth of the volume of electricity generated from RES exceeded plans by 30.8 percent as of 2013, while the installed capacity exceeded the plan by as much as 55.5 percent.

This summer, employers were already complaining about the high electricity prices endangering their competitiveness not only in comparison with other EU member countries, but also those outside the EU not obliged to meet strict environmental limits.

“The end prices of electricity in Slovakia have been increasing since 2007 and for several years have been among the highest in Europe,” their statement reads, citing as an example that while on average, steelworks in the EU paid about €62 per MWh in 2012, in Slovakia it was more than €100 per MWh. “Paradoxically, the price of electricity as a commodity has had a downward trend over the last years, including in Slovakia. The regulated portion of the end electricity price is developing in the opposite direction, primarily as a consequence of the increase in the support for electricity generated from renewable sources.”

The Economy Ministry responded to the latest criticism saying that it has already assessed possibilities for the reduction of regulated charges, especially the charge for operating the national grid and the charge paid into the National Nuclear Fund.

“But it is necessary to discuss the given fields with affected institutions prior to taking further steps,” Miriam Žiaková, spokesperson of the Economy Ministry, said, as cited by TASR.

Prime Minister Robert Fico sees as a solution lifting the duty of companies to contribute into the National Nuclear Fund, created to cover the costs of decommissioning nuclear power stations, handling used nuclear fuel as well as radioactive waste, while leaving this duty to only Slovenské Elektrárne as well as changes to other regulated charges.

All electricity consumers contribute €3.20 per each consumed MWh to the National Nuclear Fund, while the fund collects over €80 million annually, the Hospodárske Noviny daily wrote. Energy Analytics stated in the position material that the total annual contribution of large consumers is capped at €2 million.

While energy-intensive businesses welcome this proposal, Slovenské Elektrárne does not like it. Jana Burdová, spokesperson of SE told Hospodárske Noviny that SE does not bear the responsibility for failure tocreate reserves for decommissioning the nuclear power stations before 2006, i.e. before Italian Enel acquired a 66-share in SE.

“From the legal point of view it is not possible to transfer the historical debt to the current operator of nuclear power stations,” said Burdová.

“The contribution to the fund represents settlement of our historical debt because until the privatisation of SE we used nuclear energy, but we did not put aside a sufficient amount of money for its final part [decommissioning and handling with used fuel and radioactive waste],” Badida told Hospodárske Noviny.