THE ECONOMY Ministry agreed to increase the budget on building two new reactors at the Mochovce nuclear power plant during a Slovenské Elektrárne (SE) shareholder meeting on November 21. Costs will balloon a further €830 million to €4.63 billion, the state owns a third of SE’s shares with Italian conglomerate Enel controlling the rest. 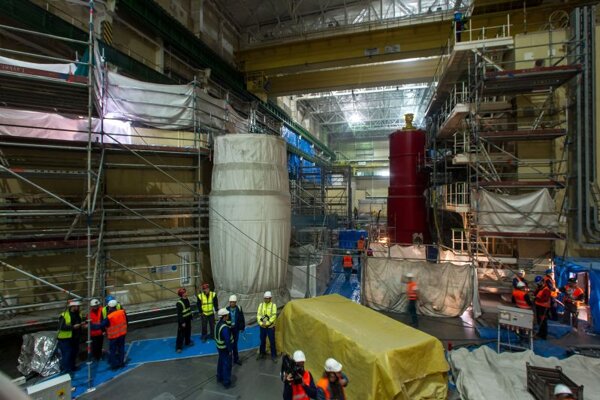 THE ECONOMY Ministry agreed to increase the budget on building two new reactors at the Mochovce nuclear power plant during a Slovenské Elektrárne (SE) shareholder meeting on November 21. Costs will balloon a further €830 million to €4.63 billion, the state owns a third of SE’s shares with Italian conglomerate Enel controlling the rest.

The third block of Mochovce is planned to be put into commercial operation in late 2016 and the fourth one year later, both four years later than originally planned.

“There is no other possibility than to complete Mochovce,” Economy Minister Pavol Pavlis told the Hospodárske Noviny daily, referring to already invested money, thousands of people working on the blocks under construction as well as 150 subcontractors, half of whom are from Slovakia.

While SE will take out a loan to cover the extra €830 million, the postponed completion of the project also means less money in the state budget as SE dividends are used to finance completion works. At the shareholder meeting, Enel agreed to 14 measures to improve project management.

“We’ve set a condition that all invoices and contracts exceeding €2 million will be subject to checks and will have to be approved unanimously by the managing board,” Pavlis said, as cited by the SITA newswire. “We also agreed upon usage of capacities of Slovak managers in this project.”

The shareholders also agreed on the launch of a managing and coordinating body that will manage further work on the blocks. Additionally, entire process will be assisted by the Czech company Škoda Jaderní Strojírenství, which is set to assess the project independently.

“As an independent body it will enter the whole process of management,” Pavlis said. “It will adopt measures to be accepted on both sides. I believe that all these measures will contribute to completion of the project by the deadlines agreed upon at the general assembly.”

SE officials see the decisions of the shareholders as an important step forward in the continuation of the work.

“Today’s decision reflects the importance of the completion of Mochovce units three and four, both for the Slovak economy and the nearly 10,000 people who are employed on the project, as well as for SE itself,” Luca D’Agnese, director general of Slovenské Elektrárne said. “I would like to take this opportunity to reaffirm the commitment of SE and the Enel Group to achieving the completion of the plant.”

The Mochovce project to build four reactors was launched during the communist era while only the first two blocks were completed in the 1990s. Construction of the second two reactors resumed in 2008 after Enel acquired a majority stake in SE. At present, the third block is nearly 80 percent complete, and the fourth 60 percent.

The second two blocks will have the net capacity of about 1,000 MW and they will also be the first plant in Europe to fulfil all post-Fukushima requirements for new plants, according to SE.

While SE puts implementation of post-Fukushima improvements as main reasons behind the delays and higher costs, Pavlis reiterated his criticism over the slow and expensive work.

“These activities have been carried out in an inefficient way to date,” said Pavlis as cited by the TASR newswire. “That’s why the expenditures have had to be increased, and that’s why we want to intervene and take some of the responsibility onto our shoulders.”

Pavlis believes that the €4.63 billion budget for the completion of Mochovce is final while the shareholders’ agreement does not enable fines for SE for the failure to complete the project on time, according to the Pravda daily.

The biggest question remains whether the investment into the second two blocks of Mochovce would produce a return as low electricity prices are taken into consideration. In this respect Pavlis said that it is difficult to estimate future energy prices.

“Nuclear blocks are a project for a long period,” he told the Sme daily. “Nowadays the life span of power stations is 60 years, thus it is a long-term and not short-term investment at which the effect may be immediate. Today it is difficult to talk about where energy prices would be after 30-40 years.”

“As Slovakia depends either on supplies of gas or oil, strengthening energy security… is for us a very important element within security of supplies of energy to Slovakia,” Pavlis told Sme.

Greenpeace in Slovakia and the opposition Sieť party criticised the increase in the Mochovce budget. Greenpeace sees nuclear energy as bad and disadvantageous for Slovakia pointing to the fact that Prime Minister Robert Fico’s government is not able to find €300 million to settle debts of hospitals or increase pensions. Sieť warns that the budget of Mochovce’s second two blocks was increased by 70 percent and there are no guarantees that €4.63 billion is the final bill, SITA wrote.

Slovenské Elektrárne is the dominant power producer in Slovakia with the gross capacity of 5,739 MWe. Enel is in the meantime offering its own stake in SE for sale. It has received three non-binding offers for its 66-percent stake in SE but expects that further bids could still arrive. Slovak refinery Slovnaft together with the company MVM Group and Czech electricity companies ČEZ and Energetický a Průmyslový Holding (EPH) have officially confirmed interest in SE while other interested investors may be Finnish Fortum and the China National Nuclear Corporation (CNNC), according to Pravda.

Slovakia, which via the Economy Ministry holds 34 percent in SE, has not submitted a bid for a full state takeover, but Fico has indicated this is a possibility.