Boats on the Danube may speed up commuting to Bratislava

THE RECENTLY introduced Danubebus project may soon enable residents three municipalities south of Bratislava situated near the Danube River to commute to Bratislava by boat. 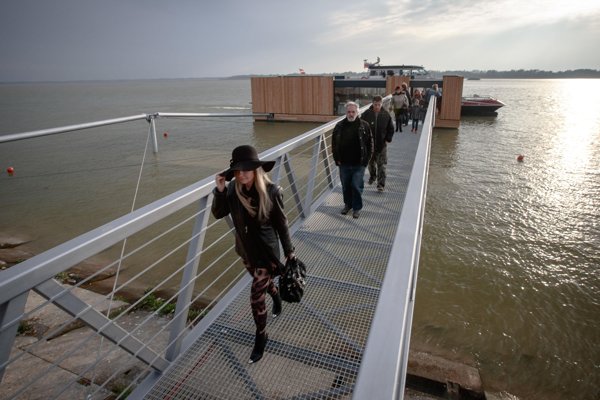 Though the pontoon docks in the harbours have already been built it is not clear yet when the route will be open as the responsible parties are still dealing with procuring boats.

The three floating concrete pontoons near Bratislava’s Čunovo district, the village of Hamuliakovo and the town of Šamorín were ceremonially opened in late October 2014. One area also has a waiting room, a buffet and restrooms. The construction was initiated by the mayors of the three municipalities and implemented by state-run Vodohospodárska Výstavba company. The total cost was nearly €2 million.

The building of pontoons was a condition for launching further stages of the project to establish the river connection between these municipalities and Bratislava.

“The new pontoons represent the gateway for Čunovo, Hamuliakovo and Šamorín, allowing transportation to these places also by water,” Diana Migaľová, spokesperson for Vodohospodárska Výstavba, told The Slovak Spectator.

Transport by passenger boat is a common mode of transportation in the world. It is possible for regular commuters to use it, thus circumventing the traffic jams on the main roads to Bratislava, but also by tourists who could see the surroundings of the capital from another view, she added.

“The advantages [of this project] are especially the quick transport to the city centre, thereby relieving traffic on the roads,” Gabriela Ferenčáková, mayor of Čunovo, told The Slovak Spectator.

One of the disadvantages, however, is the pontoon’s distance, she added. It is located near the white water complex, outside the municipality.

“Securing the transport connection to the harbour would increase the interest in this kind of transport from the side of not only the inhabitants of Čunovo, but also Slovaks living in the nearby Hungarian villages,” Ferenčáková said.

The construction of the pontoon docks is only the first phase of the project whose aim is to expand boat transport on the Danube. Other phases include the construction of piers for the small ships and then establishing a regular schedule between Bratislava and the municipalities, the TASR newswire wrote.

The project is currently in the phase of searching for money to procure the boats designed for this kind of transport, Ľubomír Feješ of company Nautivia, the author of the project, told The Slovak Spectator, adding that the firm is currently discussing the possibilities with banks of taking a loan or using leasing for the boats

The regular line may be established in 2016 at the earliest, Feješ said. He added, however, that the whole process might be speeded up if the project got support from authorities from the public sector.

“It works in a similar way when it comes to other forms of suburban service, and also to similar projects of passenger boat transport in other European cities,” Feješ added.

It is also not clear where the pontoon will be placed in Bratislava. According to the plans, it should be at a place that will secure good public transport connections to the rest of the city, TASR wrote. The most appropriate place would be near Eurovea shopping centre, Feješ said.

Another still unsettled thing remains the price of a ticket. The mayors, however, say it should not be more than what people pay for a bus or train ticket, the Pravda daily wrote.

Regarding passenger transport on waterways, Slovakia lags behind its neighbours through which the Danube flows and does not fully use the potential that rivers have, Feješ said.

Transport by water is nothing new for Slovakia. In the past, a national fleet of mercantile boats for transporting goods and people was developed and had an important place among the fleets of other countries on the Danube. Its development, however, was stopped by the economic crisis in the 1980s, the Transport Ministry spokesperson told The Slovak Spectator.

The European Union considers this kind of transport the most ecologically and economically sound and as part of its transport policy it is gradually creating conditions for establishing better waterway infrastructure. It is among Slovakia’s priorities for the 2014-2020 programme period, as part of the Operational Programme Integrated Infrastructure, the spokesperson added.

“Our aim is to use the geographical benefit and location of Slovakia on the important route of the Danube and also to create conditions to use the potential of Slovak rivers for waterway transport,” Kóňa said.

The country will focus on two projects. First, to modernise and complete parts of the public port in Bratislava and second to improve the navigability of the Danube, which will also impact use of existing harbours on the river, he added.

When it comes to development of the boat transport, Feješ points to the importance of support from public administration, including guarantees and funding, either via loans or contributions from EU funds.

He compared meeting these conditions to the successful project of the Baťa Channel on the Morava River.