THIS spring, a globally endangered species – great bustard (Otis tarda) – has returned to a locality not far from the capital, after four years of absence. 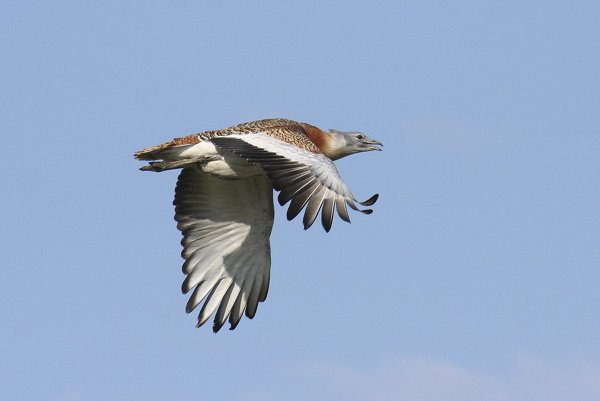 Great bustard belongs among the heaviest flying birds of Europe; a hen weighs three to five kilograms, a cock eight to 16. Due to the considerable weight, bustards cannot manoeuvre well during flight and thus, electric wiring is a big threat for them.

In Slovakia, great bustards are almost extinct. A flock of about 20 bustards was observed in the 1980s in the Protected Bird Area (CHVÚ) Lehnice but they gradually died after crashing into electric cables of newly-built transmission lines, head of the Raptor Protection in Slovakia (RPS) Jozef Chavko told the TASR newswire.

Between 2000 and 2009, the State Nature Protection of Slovakia, RPS and Slovak Ornithology Society / BirdLife Slovensko made the project LIFE to save bustards with the support of the European Union. Local farmers, the hunters’ association and the municipality of Lehnice also engaged in these activities. The result has been making electric wiring more environment-friendly in the whole of CHVÚ, especially the installation of eco-guards and warning elements on wirings and cables that make them visible.

For successful breeding of bustards – but also other species – a fallow area of about 40 hectares was created in the intensely cultivated CHVÚ in which indigenous flora and insect communities were renewed which are irreplaceable in the diet of bustards, Chavko explained.

Thus, CHVÚ Lehnice has become the first bird-protected area friendly for birds where the threat of injuries or deaths of bustards – and birds more generally – following collisions with wiring has been totally eliminated and where the cultivation has been adapted to environmental requirements, Chavko summed up. Apart from Lehnice, the only other site where bustards can be found is CHVÚ Sysľovské polia near Bratislava.

Bustards eat mostly insects, small vertebrates or fleshy berries. In the beginning of the 20th century, the number of bustards on Slovak territory was estimated at 2,400; while at the break of 1980s/1990s, there were only several dozen left. The decline in bustard population is ascribed to the deaths by wire, but also to shrinking of natural steppe habitats which were mostly turned to agricultural land, the SITA newswire wrote.