OFFICERS from the National Crime Agency (NAKA) carried out a raid on the headquarters of regionPRESS, the publishing company owned by Paulina Matovičova, [wife of Ordinary People and Independent Personalities (OĽaNO) party head Igor Matovič] in Trnava on August 12, the website of Hospodárske Noviny daily reports. 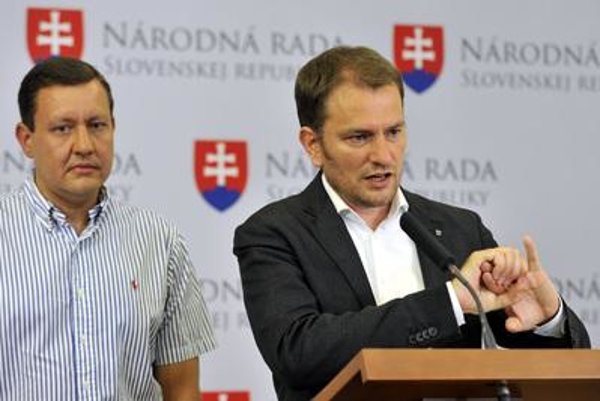 “The operation was ordered by the Special Prosecutor’s Office,” hn.hnonline.sk wrote, referring to information released by one of regionPRESS’ staff members on Facebook. “Six police officers and two experts are in the building.”

The operation was allegedly connected with the scandal involving an audio recording featuring Matovič and Sieť (i.e. Network) party leader Radoslav Procházka, in which the latter was alleged to have shown interest in an under-the-counter political advertisement in regionPRESS’ commercial newspapers.

The regionPRESS director originally stated that they would cooperate [with the police] in everything. However, as they had obviously not reached an agreement, the police decided on this measure, and they came with a prosecutor's warrant to secure evidence, according to the media. Procházka has allegedly already provided documents related to his presidential campaign in March 2013 to the police.

Matovič described the police raid on regionPRESS for the TASR newswire as a form of bullying, and indicated that Procházka may have been involved.

“I’ve got the feeling that what happened today was a display of how well whistle-blowers are actually protected by the law,” Matovič said, as quoted by TASR. “I’ve reported corruption, and they’re now attempting to exact revenge through our family business. A commando unit stormed in to our company and our firm was given a slap in the face. They’re going to bully us, while the one who’s been involved in corruption keeps going around in a white shirt with his sleeves rolled up,” he said, in an obvious reference to Procházka’s billboards. When asked at the press conference whether he believes that Procházka was behind the raid, Matovič said that the Sieť leader indicated in a recent interview that a “big thing” would happen soon in the case.

As for the audio recording that was released in full a few months ago, Matovič said that it was certainly leaked by the police.

The NAKA officers did not act in line with the Special Prosecutor’s warrant, as they seized a server instead of only making a copy of the data, so the company has been paralysed, Matovič complained.

Daniel Lipsic, leader of the new NOVA party which will feature on OĽaNO’s slate in the March 2016 general election, said that he had expected attempts to damage the political association. “When we were announced the coalition, I stated that there will be attempts to discredit it,” he explained. “It’s because somebody is afraid. Neither NOVA, nor OĽaNO are funded by oligarchs, so it’s necessary to launch such a campaign now,” said Lipšic, adding that it's only the beginning. According to him, somebody has already begun offering money for information that can damage Matovič’s reputation.

Procházka, approached by TASR, denied having anything to do with the police operation at regionPRESS. “I learnt about the operation at MP Matovič’s former company from the media. I don’t know the reason for the operation and it doesn’t me bother me either,” he summed up.

The Police returned the server seized from regionPRESS to the Matovič family on the evening of August 12, the OĽaNO leader confirmed to the TASR newswire the next day. However, two hard-discs containing salary documentation were not returned and so the employees will not get their salaries on time, i.e. on August 14. NAKA promised to return them on this very day, Matovič said, adding that copying data – which is the pretence for seizing the servers and not returning them – should not take so long.