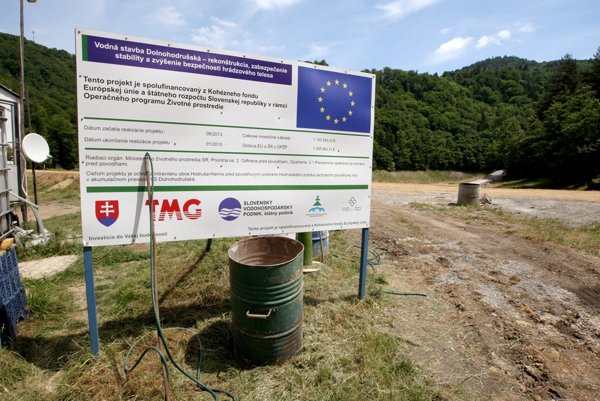 KILOMETRES of new highways but also the so-called bulletin-board tender come to mind when Slovaks think about funds the European Union allocated for Slovakia, and a history of lagging on tapping these funds looks set to continue.

Ľubomír Vážny, Vice Prime Minister for Investments,  said that Slovakia would draw 92 percent (€10.4-10.6 billion) from the allotted money by the end of 2015, which has triggered criticism of Prime Minister Robert Fico cabinet’s ability to fully tap available funds.

“Slovakia will fail to draw almost €1 billion and the EU will not refund us more than €543 million due to errors, overpriced purchases or non-transparent procurements,” said Pavol Zajac, vice-chairman of the opposition Christian Democratic Movement (KDH), as cited by the SITA newswire. “These hundreds of millions we will have to pay from our state budget.”

Richard Sulík, the head of the opposition Freedom and Solidarity (SaS), estimated that the undrawn funds would exceed €1 billion.

Vážny responded that information that the government was not able to use EU funds even after a two-year extension of programming period 2007-2013 is nonsense, specifying that Slovakia has time to handle the necessary accounting procedures by the end of April 2016.

“Certified expenses ... which are valid and are scheduled for reimbursement from the European Commission are currently at about €10.5 billion, which is over 90 percent of all available resources,” said Vážny, as cited by the TASR newswire. “Mechanisms and processes are adjusted such that by the end of 2015 or by the end of April 2016 respectively, we will draw the rest.”

Vážny specified that by the end of 2015 the certified expenses would be at €10.7-10.8 billion, which represents 94 percent. He also explained that authorised expenses are considered those that are paid by the recipient to the supplier, whether it concerns labour, goods or services. For example, if a municipality is a recipient of EU funds, it has to pay an invoice by December 31 to be considered an authorised expense. But it takes some time between when the municipality summarises the invoice and sends it to the respective authorities for it to arrive at the Finance Ministry, which approves it. Thus there will remain only €700 million to be processed by the end of April.

“I firmly believe that… everything will be drawn,” said Vážny.

Zajac of KDH estimates that funds the EU would not refund to Slovakia would exceed €550 million because drawing of EU funds was rushed during the last two years and spending of the money was ineffective and accompanied by errors.

Ján Rudolf of SaS estimates that Slovakia may lose more than €1 billion of EU funds. “The European Commission will audit all the projects and programmes after the programming period is over,” said Rudolf, as quoted by SITA, adding that when it finds errors, for example during public procurement, it will not refund a certain sum or percentage of the money allocated for the project.

The National Strategic Referential Framework that includes 11 operational programmes indicates that the volume of corrections in the use of EU money was €450.6 million in late September and €82 million in use of the state’s money, according to SITA.

The expected total amount of corrections will be, according to Vážny, known only when the Finance Ministry completes the audit process and the EC accepts the report.

Prime Minister Robert Fico led the country for most of the 2007-2013 programming period. Among other things, the government re-worked projects that the Mikuláš Dzurinda cabinet had agreed upon earlier and this meant a delay in drawing EU funds. Slovakia has been among the weaker drawers of EU funds over the long run. Due to this the country got two additional years, 2014 and 2015, to draw money allocated for the 2007-2013 period. By the end of 2013, Slovakia had drawn just 60 percent of the available funds.

A similar delay is expected for the current programming period 2014-2020 for which Slovakia was allocated more than €15 billion. Experts estimate that Slovakia is already lagging two years behind pace.

“Ministries are busy with completing the programming period 2007-2013,” said Tamás Szőke, EU funds expert and partner of the consultancy company Centire, as quoted by the Hospodárske Noviny daily. “I see as a risk that most ministries rely upon external consultancy capacities when starting up the new programming period because such a solution does not contribute at all to building internal know-how.”

Vážny estimates that between €1 billion and €1.2 billion may be drawn from the new package of EU funds in 2016. Last year Slovakia drew €200 million, TASR reported. But for now, according to him, contracting and not drawing of funds is important.

“When we create suitable conditions for contracting of projects we have enough time by the end of the programming period for their realisation and in case of failure for back-up scenarios,” Vážny told TASR.

EU funds during the 2007-2013 programming period were also tarnished by scandal, for example, the so-called bulletin-board tender, in which more than 3 billion crowns (€100 million) in EU funds were awarded to an apparently pre-selected bidder. Other infamous projects financed from EU funds include so-called social companies.

Experts perceive Slovakia’s scheme for drawing EU funds as too bureaucratic and non-transparent, as well as lacking independent monitoring of transparency and how effectively funds are used.

Ivan Kuhn, an analyst at the Conservative Institute of M. R. Štefánik, pointed out that while millions of euros are used for promotion of EU funds no money is allocated for their independent monitoring. He added that the end of the programming period 2007-2013 was linked with hectic drawing of EU funds at any price so that the cabinet could show off as high percentage of the drawn EU funds as possible.

“Because, alas, in Slovakia, the most important indicator is the percentage of drawing, not how the EU funds were used,” Kuhn told TASR.