Strabag will build a park for Jaguar

CONSTRUCTION company Strabag, responsible for hydrogeological investigation of the lands in Nitra, will prepare a strategic park where a new plant of British carmaker Jaguar Land Rover will stand.

The site near Nitra where the new strategic park will stand. (Source: SME)
Font size:A-|A+40

The company was picked by state-run company MH Invest, running under the Economy Ministry, without a public competition. It will receive €123 million, the Sme daily reported.

According to the available information, there were four firms interested in the bid. The ministry, however, failed to specify who Strabag’s rivals were, according to Sme. 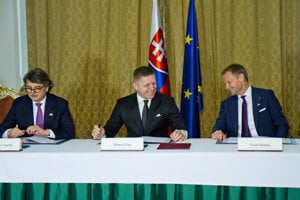 Strabag started with a hydrogeological investigation of the lands near Nitra a few months ago, after it was selected by the Slovak Investment and Trade Development Agency (SARIO). It picked the firm after its own market survey, without opening a public competition, after addressing several companies and choosing the cheapest bid.

Company MH Invest, which is responsible for building a strategic park in Nitra, also did not open a competition, and chose Strabag after a direct negotiation process. This kind of selection of the winning company is allowed by public procurement law in a few cases, for example when the competition concerns copyright or when there is extreme urgency which was not caused by the procurer, as reported by Sme.

It is not clear now why MH Invest decided not to open a public competition as it did not answer the daily’s questions. The lawyers addressed by Sme assume that the extreme urgency may have been the reason for such a step.

Meanwhile, the government decided at its January 13 session to issue a certificate to Jaguar Land Rover, confirming its plans have a status of important investment and that its realisation is in public interest, the SITA newswire wrote.