How strong is Fico’s record on security matters? 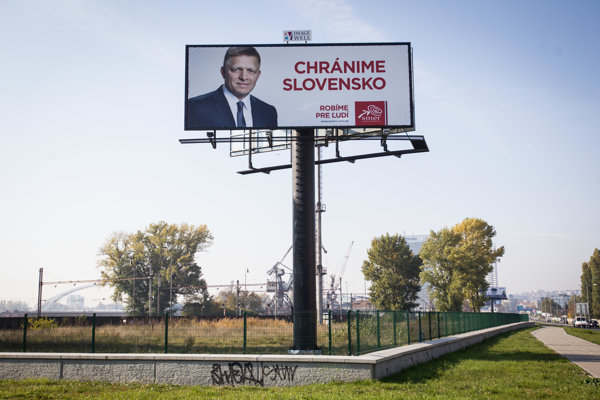 It has taken the better part of a year but public discussion as it relates to the election looks finally to be focusing on issues like education and health care. Instead, Prime Minister Robert Fico has attempted to make the campaign exclusively about security. “We Protect Slovakia” Smer billboards proclaim across the country. But how strong is Fico’s record on security matters?

To start, the government has made no serious effort to comply with the pledge to spend 2 percent of GDP on defence that NATO members make when they join the military alliance. This year’s budget calls for 1.1 percent of GDP to go for defence. One can certainly make an argument that other, domestically focused, spending should be a higher priority – unemployment remains above 10 percent after all. However, that argument makes no sense when Fico also insists that Slovakia faces an existential threat from migrants abroad. If the country’s biggest problem is an external danger, one would think spending money on external defence would be important.

What the government does make a priority is spending on security within the country – in other words protecting Slovaks from other Slovaks. The government has slated €614 million from the 2016 budget to pay for security and public order, that is the highest as a percentage of GDP in the European Union. Overall, crime has declined in Slovakia over the past decade, but it has also been in general decline across the entire developed world for more than three decades. Despite disproportional spending on domestic security measures, Slovakia’s results are not that good when compared to other countries in Europe and the region.

According to a study by the United Nations Office on Drugs and Crime there are 15 EU countries with lower intentional homicide rates than Slovakia. Since there are only 28 EU countries this means that while Slovakia spends the most on policing, it remains in the bottom half of the EU in terms of results. Among Central and Eastern European EU members the Czech Republic, Poland, Slovenia and Croatia all have lower rates, as do non-EU members Serbia and Bosnia-Herzegovina. Homicide rates are considered a particularly accurate measure of general crime as unlike other crimes, most murders are reported to police.

Other statistics paint a similar picture. According to OECD data on personal safety, among its 36 members Slovakia ranks 13th in preventing assaults and 24th in homicide rate. According to numbers compiled by the statistical service Numbeo, Slovakia’s 2016 “crime index” – which estimates the overall level of all crimes – ranks 18th in Europe. There are seven CEE countries with a lower crime index – Estonia, Slovenia, Belarus, Croatia, Romania, Poland and the Czech Republic. The rankings are similar for Slovakia’s safety index, which measures the opposite.

To review, when it comes to security – Smer’s primary argument for why they should be reelected – the current government spends more for worse results, while directing those resources to the wrong things.