THE SLOVAK Philharmonic Choir (SFZ) is turning 70 and will celebrate with a special concert February 19. As the whole 2015/2016 season stresses the SFZ and its work,The Slovak Spectator approached its choirmaster Jozef Chabroň. 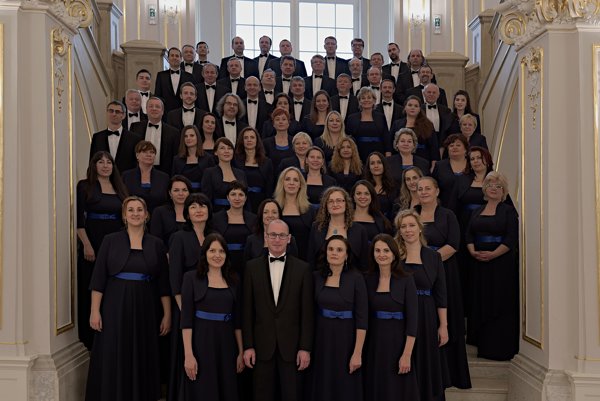 The Slovak Spectator (TSS): Are there any highlights from the SFZ’s past that stand out?

Jozef Chabroň (JCH): I first contacted the choir after I started studying in college; I did not miss a single concert, as I was fascinated by choir conducting. I do not have any strong moment from the time before I joined the ensemble. I started in 2006 as the assistant of my predecessor, Blanka Juhaňáková, and this is my second season as choirmaster.

During the eight years as an assistant, there were many concerts and tours, and it is hard to name just a few.

We are proud of the 28 years’ collaboration with the Vienna State Opera where we gave 130 performances in seven productions, as well as singing at the Salzburg Festival, at the Zurich Opera, at BBC proms in the Royal Albert Hall, in Konzerthaus and Musikverein in Vienna, in Bunka Kaikan and Suntory Hall in Tokyo, among other things.

TSS: What was your personal contribution to the current SFZ; did you change anything after you became choirmaster?

JCH: If anything, I would name communication, also with our [Slovak Philharmonic] programme director Ivan Marton who took his job at about the same time as me, and thus several changes connected with us both were involved. He brings contemporary, topical music, like the Missa Posoniensis (which premiered in SF on January 14) by Slovak Vladimír Bokes, and some daring new things that have never resounded in the Slovak Philharmonic. With Marton, we put stress on performing also works of Slovak composers; be it archive ones, or commissioned by us. Our status implies the orientation on Slovak music and Slovak composers, and we gladly create this space. A big change is more “a capella” concerts, like the one hailing 70th anniversary. 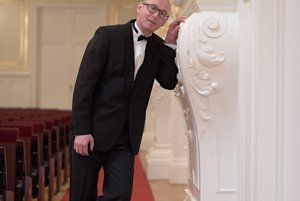 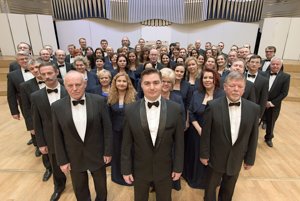 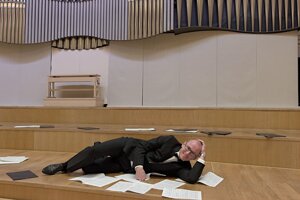 TSS: And what is behind the musical selection for this anniversary concert to take place February 19 in Reduta?

JCH: After having consulted it with the choir’s council and the musicians, my idea was that the first part would be composed of religious and spiritual music, with the break offering an exhibition about the 70 years of choir. The second part would bring secular music – contemporary Slovak composers. It will include an adaptation of a Slovak folk song, or a premiere of a piece written specifically for this concert, Slovak Ballads by Viliam Gräffinger.

TSS: Will the anniversary reflect in the entire season more generally?

JCH: This season is especially busy in Slovakia. We perform in Bratislava with greater frequency, but there were also some concerts abroad. We already performed Khovanshchina by Mussorgsky in Vienna; at the UNESCO residence in Paris – Egon Krák’s oratorio Pútnici / Pilgrims, hailing the 200 anniversary of Ľudovít Štúr; Rachmaninoff’s All-Night Vigil (or Vespers) in Hamburg.

In Slovakia, we sing many different works, Bokes, Claude Debussy, Szymanowsky’s Stabat Mater. We will have the Festive Concert, then Mendelssohn’s Elijah, to be rehearsed by Vienna State Opera’s choirmaster Thomas Lang. We will twice sing under the baton of Juraj Valčuha (Oidipus Rex, Beethoven’s 9th Symphony), Boris Godunov – again in Vienna State Opera – and in July, in Brussels at a concert with renowned Slovak soloists Jo-lana Fogašová, Štefan Kocán, Pavol Breslik.

TSS: What is the SFZ’s standard repertoire?

JCH: It is an almost unlimited repertoire, from early-Renaissance to the most contemporary music, like the premiere of Bokes’ Missa Posonienis (which is slightly older, though, from 1970s).

In its 70 years, it presented, especially to the Slovak public, all crucial vocal-instrumental works of classical music, including Carmina Burana, Verdi’s and Mozart’s Requiem, Beethoven’s 9th Symphony, works of Slovak and Czech composers, music of all periods and genres, as well as contemporary classical music.

TSS: Do choirmasters have any unfulfilled dreams?

JCH: They surely do. My current dreams are connected with the choir; so that is gets as much as possible on big stages worldwide. In the 70 years of its history, it experienced times of big boom in foreign concerts, especially in 1990s, after the fall of communism when the borders opened.

My biggest dream – and surely also that of the SFZ choir – is the Salzburg Festival. It is kind of Mount Everest for all musicians.

SFZ was established in 1946 as the Mixed Choir of Bratislava Radio. In the first years, it was led by its founder, conductor Ladislav Slovák, first singing in radio broadcasts, and then also in the Slovak National Theatre. In 1948, the choir performed at the Prague Spring festival. Since 1955, it was led by Jan Maria Dobrodinský for more than 20 years. In 1957, already as Slovak Philharmonic Choir, it became part of the Slovak Philharmonic. In 1970s and 1980s, influential conductors and choirmasters formed the musical body, like Valentin Iljin, Lubomír Mátl, Štefan Klimo, Pavel Baxa, Pavol Prochádzka, Marian Vach, Jan Rozehnal and Blanka Juhaňáková. In the 70 years of its existence, the choir experienced – and helped train and form – several generations of singers.