Prime minister's statements harm the image of the country but are unlikely to have a direct impact on turn as head of EU Council. Still, quotas for relocation of refugees will not feature high on the agenda. 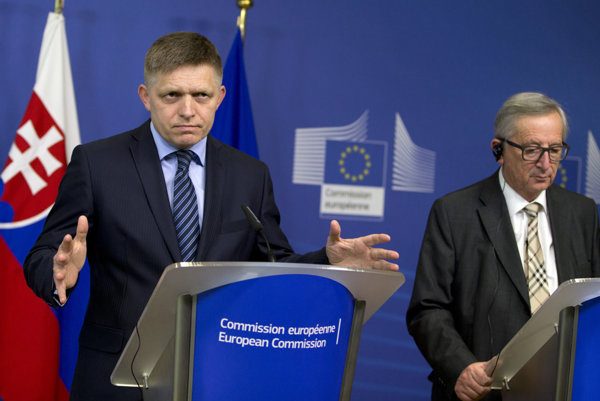 In less than one month, the European Union will be presided over by a country whose prime minister does not shy away from saying Muslims are not welcome in his country.

Prime Minister Robert Fico visited Brussels in early June to meet EU top officials ahead of Slovakia taking over the presidency from the Netherlands on July 1. Only days before his visit, he returned to his harsh anti-Muslim rhetoric in the first post-election interview he gave to the TASR newswire.

Fico has made similar statements in the past as well, but that was amid the election campaign. Prime Minister Robert Fico has never been a fan of, for instance, the refugee quotas that the European Commission introduced last year, and in fact Slovakia is suing the EU over the quota plan. Now, Slovakia under his leadership will have to contribute to seeking compromises and ease tensions to facilitate the drafting of a common European solution for the migration crisis as the presiding country.

Refugees will be an issue

If Slovakia wants to come out of its presidency with the image of a good negotiator and country that presided successfully, it should avoid the agenda of refugees, Aneta Világi, an analyst from the Comenius University’s school of political science, opined for The Slovak Spectator.

But while “sustainable migration and asylum policy” is among the four areas of priorities that Slovakia wants to focus on during its presidency, quotas for relocation of refugees will not feature high on the agenda.

Foreign Minister Miroslav Lajčák insisted the relocation quotas are only "one element of a very wide process and reform", adding that Slovakia wants to discuss the issue of migration in its complexity and entirety.