GPI survey: Trump would have no chance in Slovakia

It seems that if Slovaks had to decide on a US president, they would prefer Hillary Clinton to Donald Trump with a vast margin, a Globsec Policy Institute survey has shown. 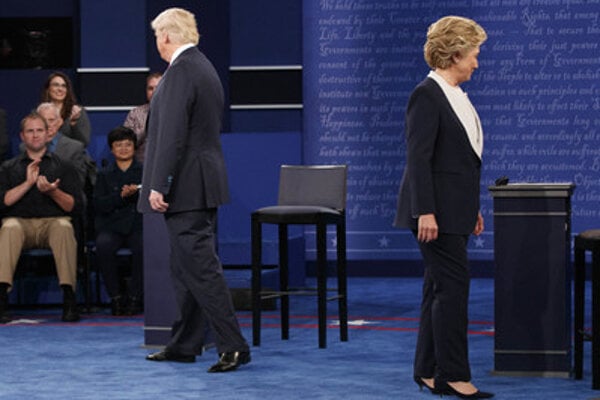 Although members and supporters of some parties (Sme rodina, Kotleba_ĽSNS and Slovak National Party (SNS) have a more positive stance towards the Republican candidate for US president, no group sees him prevailingly as positive, the Denník N daily wrote on November 7.

Only 19 percent of respondents perceive Trump more or totally positively. On the contrary, 69 percent of Slovaks see the eccentric billionaire with political ambitions rather or exclusively negatively. Hillary Clinton polarises the public; but in Slovakia, positive perception prevails – with 50 to 41 percent.

The Institute surveyed the stance of the Slovak population towards US presidential candidates this September, as part of a wider poll on local perceptions of political leaders. The popularity of Clinton virtually copied the figures of incumbent President Barack Obama.

Authors of the survey stress that the figures are not accurate as they do not reflect the dilemma of US voters to pick one of the candidates; it merely shows sympathy towards one or another candidate in the wider context of the Slovak stance towards global leaders, the daily wrote.

The reasons behind: information, media

Globsec analyst Daniel Milo opines that Slovaks – as well as other central Europeans – see a fundamental difference between Clinton and Trump: Hillary Clinton is the representative of the current administration of Barack Obama, who also placed quite high; thus being perceived as a guarantor of US presence in Europe. Trump is felt as more pro-Russian (which is not always positive, despite the general idea of pro-Russian moods in society) and unpredictable. Moreover, Slovak and European media portray him as insulting women – which strongly resonated in Slovakia – and provoking scandals, while failing to point to the core of his popularity at home, the revolt against establishment and the shift of car production to Asia or dampening coal mining in Pennsylvania.

Donald Trump is felt as pleasant rather by men than by women (23 percent of men, against 15 percent of women). Surprisingly, 24 percent of college and university students prefer Trump.

As for parties, voters of Sme rodina of Boris Kollár liked him more than others, although the majority was still rather negative. Especially Kollár himself praised Trump’s position as a businessman and his expected ability to make compromises. Voters of Kotleba-ĽSNS and OĽaNO are more prone to prefer Trump, Denník N wrote.