The education minister says this suggests a need for reform.

The performance of Slovak pupils in mathematics, science and reading is significantly lower than the average for pupils from the Organisation for Economic Cooperation and Development (OECD) countries. This report stems from the results of the international PISA 2015 tests carried out by OECD every three years.

The testing was conducted at 292 schools in Slovakia in April 2015. A total of 6,350 pupils from primary schools, grammar schools and secondary vocational schools took part.

“We’re observing a downward trend in the performance of our students in all three areas,” the Slovak Education Ministry wrote on its website, as quoted by the TASR newswire. “However, when compared with the results of the PISA testing in 2012, the decrease isn’t statistically significant.”

Slovak pupils scored 461 points in science, while the average performance for OECD countries was 493.

“In science, our students posted a result that was on average 10 points lower when compared with the 2012 tests,” claimed the ministry, as quoted by TASR, adding that this is not a significant difference.

However, when compared with the tests in 2006, which had a particular focus on science, there was a significant decrease of 28 points.

As for maths, the sample of Slovak students scored 475 points, while the OECD average was 490.

“Compared to 2012, when maths was the most observed area, the average performance of our pupils fell by six points, which isn’t a significant drop in their results,” stated the Education Ministry.

Regarding reading skills, the Slovak pupils scored 453 points – below the OECD average of 493.

“In the 2015 PISA testing – as in all previous cycles – the performance of Slovak pupils in reading is below the OECD average,” said the ministry, as quoted by TASR, adding that compared to the 2012 tests, the average performance dropped by 10 points, thereby representing no major change. 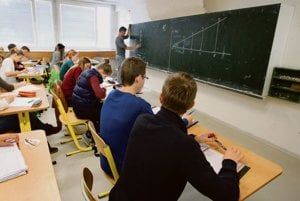 While in the past, only children from disadvantaged groups reported worse results, in 2015 all children scored poorly. The experience from abroad however shows that a quality education system can help children from disadvantaged socio-economic environments to improve their results and not at the expense of the better students. This stems from the analysis of the PISA 2015 results authored by the Institute of Financial Policy (IFP), running under the Finance Ministry, as reported by the SITA newswire.

The IFP also pointed to the fact that the expenses for each pupil are increasing though their number is actually dropping. The sources in primary and secondary education in 2015 increased 5.51 percent. This has not however been reflected in improving the results in PISA tests, as it is in some foreign countries.

Plavčan says he was not surprised by the results.

“We have to seriously deal with this topic and changes are necessary,” Plavčan said, as quoted by TASR.

In this respect he praised the national programme of education whose aim is also to introduce the curriculum.