Holocaust survivor: We lived in a hole like rats 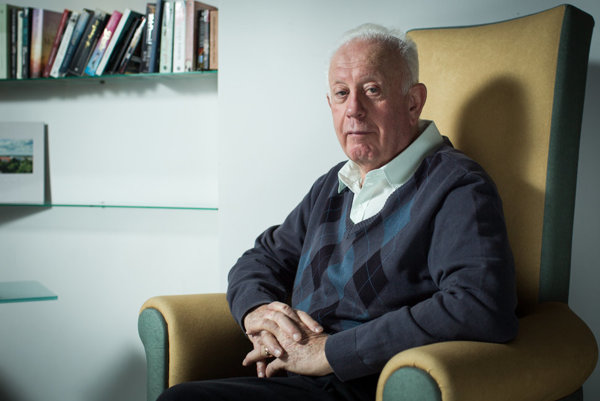 Pensioner Herman Schlosser tends to get nervous, hysteric, and suffers nightmares from which he wakes up covered in sweat. He can still feel the hands of his parents choking him to quell his crying. This is because Schlosser overcame the winter of 1944-45 in a hole under the hay hiding from Nazis. The Slovak Spectator spoke to him about his story and how he perceives increasing support for fascist ideas in Slovakia.

How do you remember the beginning of deportations?

“I’m from a village in eastern Slovakia where used to be a big Jewish community. Out of 93 families around 32 were Jewish. We had our own Rabbi, kosher butcher and school. Even Christian children visited it because it was of higher quality and discipline. I was three years old when the Nazis took me among the last deported Jews in 1944.”

Deportations started in March 1942. How did you avoid them?

“They did not take us at the beginning because my father knew how to work with charcoal. It was a scarce commodity then and my father’s skills were needed. The state office was protecting him as long as it was possible.”

“We stopped at several places until we got to a camp in Sereď. There were many Jews, it looked like Babylon. We avoided final transport to Auschwitz because my uncle volunteered for the kitchen. Then me, my parents and uncle were transported to a labour camp in Zemianske Sady village. There was a farmer who had corn and tobacco fields where Jews were working. Me, my mother and uncle worked in the kitchen while my father worked in the field. We stayed there until autumn 1944. Then the message came that the Germans planned to come and take away all Jews. People who were able to run tried to flee and save themselves. The next day the Germans truly came.”

How did you meet with your rescuer, František Svrbický?

“It was pure coincidence. We were hiding in cemetery which he visited. We were totally exhausted and freezing because it was raining during the day and freezing at night. He took mercy on us. He came back home and brought us blankets and hot food at night. He was returning for several days deciding what to do next. At last he said that he won’t abandon us and he would try to help us.”

Where did he hide you?

“We came to his house in Rišňovce village where we recovered and stayed for a while. He was risking his life by hiding us. After the war we learned that he was also helping other families. He was given several buildings which originally belonged to Jews where he was hiding three or four Jewish families. Of course, we did not know about each other.”

What was your cover?

“He had a storage room for potatoes and together with my father they dug a hole in which we hid. It was cold there so we made another hole under his shop counter. They were always working during the night in order to conceal themselves. I also have good memories from this time. The Svrbický family had one boy whom I played with. They fabricated a story that Mrs Svrbická had a daughter in Bratislava and I was her son who came for a visit. Therefore, I was allowed to go out for a while. However, we had to abandon even this hideout [neighbors started to be suspicious, editor’s note].” 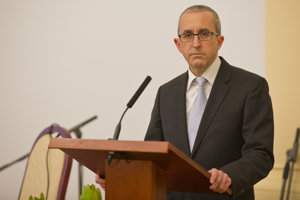 “Again, Mr Svrbický and my father dug a hole but this time under a huge haystack in a field. With scythe and sickle they created a cavern leaving the wall thick enough to stop a bayonet.”

How was life there?

“It was extremely cold. In those times winters were much harder than today. Instead of -4 degrees Celsius the temperature reached -20 degrees. When it was snowing there wasn’t two centimetres of snow but one meter. We were suffering in that haystack and couldn’t leave it. Once per week we got hot supper which we heated by candle. We were living in that hole like rats. We couldn’t go to a toilet so our secretions basically froze around us. When they brought us food we also cleaned the hole.”

What were the conditions like for a three-year-old child?

“I had to be there with my parents the whole time. As a small child, I naturally wanted to move, talk and laugh but I wasn’t allowed to do any of that. Every time I wanted to cry they put a hand on my mouth like they were trying to choke me. I still feel that hand on my face. This lasted for several months until the liberation of Slovakia in April 1945. In the end, Mr Svrbický took us to his loft because he was afraid that retreating Germans would set fire to the haystack. We were hiding there for a month. Mr Svrbický was afraid that someone will report us, despite the war having ended. At least we could slightly recover, physically and mentally.”

You were surviving in a hole for a few months. How did this affect your health?

“I had psychological problems and I came down with a fever several times. One by one I suffered from all children's diseases. These memories haunt me to this day. For example, I have an anxiety disorder. Others had problems with their legs due to the cold and lack of movement harmed their blood circulation. My mother suffered from a dislocated hip and later doctors had to amputate her leg below the knee. One of my uncle's legs got shorter. My father overcame more easily because he was in good condition due to his physical job.”

Were you able to start a normal life after all of that suffering?

“When we came back to our village we found that the whole village including our house was burned by Nazis. It was revenge for helping the partisans fighting against the Nazis. Our property was stolen. We moved to Michalovce where our family lived. I studied to be a dental technician and found a wife.”

Why did you decide to leave Slovakia?

“I am Slovak, I was born in Slovakia but I didn’t feel welcome here. Anti-Semitism did not disappear just because the war ended. I experienced it even at school. Even though I had good relationships with people I was still seen primarily as a Jew, not a human. It commonly happened to me that people called me: Hey, you, Jew! adding some vulgarism during a football match. I constantly heard that I am wealthy, have good food and clothes. The same was happening to all my Jewish friends.”

When you did you finally decided to move to Sweden?

“I had good recommendations at work so I was able to travel to the US despite strict rules under the socialism regime. I saw a life without dictatorship and wanted to live there. However, my parents wrote me, so I came back. Again, I felt surveillance everywhere. As a small boy I wasn’t good for Nazis and now I’m not good for communists. When, in 1968 the rules got milder, I was able to move with my wife to Sweden.”

You have never wanted to come back even after the fall of the socialist regime?

“I was here five years ago but I don’t feel the need to come back. Memories are too harmful. Sweden is a much more friendly country towards people.”

What do you feel when you listen to claims that the Holocaust is exaggerated and concentration camps were only for criminals?

“Those people should visit Auschwitz to talk to witnesses. History can’t be deleted. Five years ago, I visited Sereď Holocaust Museum during its construction. I said I would never go back there. I lived in those barracks when I was an innocent child.”

Did you notice strengthening of Fascism and Neo-nazism in Slovakia?

“All of Europe is in a similar situation in which it was 73 years ago. It’s not only happening in Slovakia. People in Sweden are fighting these new trends but there is a new generation of people who don't remember the horrors of war. When I visited Ružomberok 15 years ago I saw once again Hlinka Guards (a wartime Fascist organisation in Slovakia.) marching in the streets. I was terrified and wanted to leave Slovakia immediately. I don’t understand why this is allowed when we know how Hlinka Guards acted. On the other hand, I understand that politicians can do little when hatred is in people and neighbour is against neighbour.”

A couple weeks ago a Slovak MP scolded President Kiska for awarding Jews. What does it mean for you?

I’m surprised that you would say something like this. I’m human like others. I don’t understand it.”