Only 134 homeowners in the first round and 62 in the second applied for a subsidy via the insulation programme. 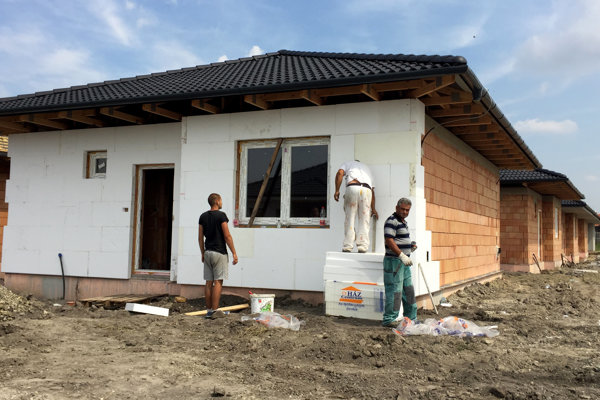 Only 134 homeowners in the first round and 62 in the second applied for a subsidy via the state insulation programme. Illustration stock photo (Source: Sme)
Font size:A-|A+

A pilot project for thermal insulation of houses operated in Slovakia as early as 1991. But even a quarter century later, there are still many buildings in need of more energy-efficient insulation.

For this reason the Transport and Construction Ministry provides generous subsidies to support mass installation of thermal insulation. The problem is that few applicants are interested in the support and even those who are do not always get it.

During the introduction of the programme in late summer 2016, Prime Minister Robert Fico justified the tool as “really 100-percent comprehensive thermal insulation which will lead to great energy savings” and expected hundreds of applicants.

After two rounds, however, less than 200 people have signed up for support. The Slovak Building Insulation Association (OZ ZPZ) sees a problem with developing the programme in the fact that homeowners who install the insulation on their own are not used to to the application process.

“People need to get used to the fact that implementation of these changes involves complex details and building permits,” OZ ZPZ chair Zuzana Sternová told The Slovak Spectator.

Within the project, the state provides subsidies for thermal insulation of external cladding, replacement of roofing, windows, doors and other intermediary structures. The aim is to insulate and make older, energy-intensive houses friendlier for citizens’ wallets, said Karolína Ducká, spokeswoman of the Transport Ministry.

“We also follow the objective of efficient spending of funds,” Ducká told The Slovak Spectator.

The ministry is seeking to involve the maximum number of households, as the government, according to its programme statement, is committed to simplifying the process of receiving support for thermal insulation.

In the first round, the ministry approved only 11 applications and reserved funds for another 41 unfinished houses. The second round resulted in 23 supported buildings, while 39 can count on reserve resources, Energia.sk reported.

Too much red tape

The main reason why people are not interested in the project is that there is too much red tape, and the administration is complicated and time-consuming with electronic and written applications. The fact that supported buildings must serve exclusively for housing also matters, according to Jesenič.

“Potential applicants could also see restraint in the condition to insulate houses only via state-licenced companies,” Jesenič told The Slovak Spectator.

Since the pilot insulation project in Slovakia in 1991, a large proportion of houses have undergone the process without complying with valid legislation. Sternová pointed out that mainly owners of older houses in rural areas insulated without any documentation and compliance with the rules, many even without reporting to the authorities.

“For years and years owners went into shops selling building material, bought adhesive mortar from one manufacturer and surface treatment from another, and this did not work,” Sternová said.

While the state support has fallen behind expectations, the government has decided to make it more attractive. The Transport Ministry submitted an amendment to the law on energy performance of buildings that increases the maximum amount of subsidies and makes it easier to receive them.

The amendment raises the maximum subsidy to 40 percent of eligible costs, or from the current €6,500 to €8,000. The final amount depends on the insulation attributes and demand for heating. The amount of reimbursement of costs connected with project documentation remains at the same level of €500.

Moreover, the ministry has extended the time limit for submitting documents from 5 to 10 working days from completion of the electronic application, as many applicants failed to send the application in paper form in time.

Owners of houses older than 10 years may apply for a subsidy after completion of the insulation process that took place in 2015 or 2016. The ministry shall decide on the subsidy within 90 days after receiving the application, according to the amendment.

While the amendment should make installation of insulation easier, experts do not expect a dramatic increase in applicants. The problem is that people do not get to see the money from state coffers until after the end of their reconstruction, Jesenič said. That means they need the full amount of resources for insulation at hand, which may deter some of them.

Owners who meet the requirements of energy performance of buildings receive full reimbursement of the reconstruction costs. Those who had already replaced their windows with worse than required attributes, never reach the currently required efficiency level of the subsidy, Sternová said.

In addition, Sternová pointed out that users cannot achieve ultra-low energy buildings’ level without the so-called recuperation, or heat recovery.

“Warm air leaked from inside heats the ventilation air and thus there is no need to overcome such temperature differences,” Sternová said.

The government also intends to support via the subsidy owners who in the past have received funds from the State Housing Development Fund (ŠFRB), but only in the case that they no longer meet the efficiency requirements.

Until now, ŠFRB has allocated resources for insulation of apartment houses inter alia from the active programme, Joint European Support for Sustainable Investment in City Areas (JESSICA). The joint initiative of the European Commission, the European Investment Bank and the Council of Europe Development Bank supports sustainable urban development and regeneration in the EU via various financial mechanisms.

Slovak households have been able to draw resources from the programme since 2012. The third wave of the aid scheme called JESSICA III is valid between May 2016 and March 2017.

In addition to private buildings, the state provides support for insulation of public premises as of December 2016. Municipalities and self-governing regions may draw a total of €10 million from the Environmental Fund for thermal insulation of kindergartens, primary schools, municipal offices, cultural houses and social service houses.

The support concerns insulation of exterior walls and cladding, roofing, first floor flooring and top-floor ceilings, replacement of roofing, windows, doors and associated heat and hot water distribution frames, and work and supply related to conservation of areas for nesting, breeding or resting of protected animals. However, the Environment Ministry has not yet decided where the money will go.

“Applicants with complete project documentation would be able to apply for a subsidy within disclosed calls,” the ministry’s state secretary Norbert Kurilla told The Slovak Spectator.

Builders insulated the entire exteriors of 332 housing units in Bratislava’s Kramáre district between 1991 and 1994. As of September 2016, 55.69 percent of apartment houses and 30.67 percent of family houses in Slovakia have been recovered,TASR reported.

While OZ ZPZ estimates complete restoration of apartment buildings in 2029 and family houses in 2045, the numbers depend on people’s interest. The biggest motivation for insulation is energy savings with 30 to 50 percent of heat savings in restored buildings, said Sternová. If people apply the full range of measures to achieve the ultra-low power level of construction, savings can amount to up to 70 percent.

“There are generated assumptions to ensure construction and renovation of buildings with energy consumption at almost zero level,” said Sternová, as quoted by TASR.

Positive factors also include riddance of water leaking into external cladding, removal of hygienic shortcomings and improvement of architectural appearance of the building, said Jesenič.

While there are several points of the law for building insulation in Slovakia, thermo-technical attributes fall under the basic norm called STN 73 0540:2012, Ducká noted.