American military base in Slovakia and war in Europe are hoaxes

This is the overview of hoaxes that appeared on the internet over the past week. 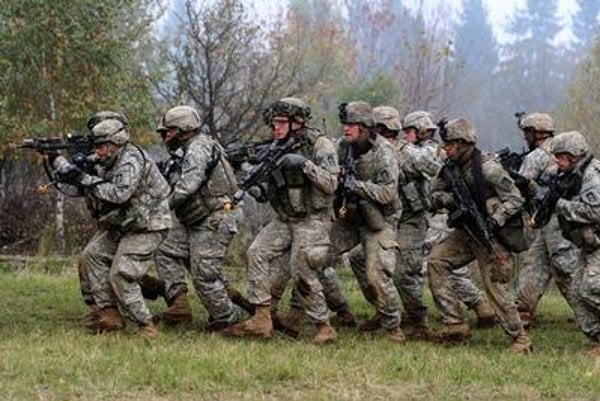 Secret American base planned in Slovakia

The Topky.sk tabloid website last week wrote that the US might build a military base in Slovakia. Former prime minister Ján Čarnogurský reacted in his blog, calling the alleged American military base an occupation.

He went on to say that far-right extremist Marian Kotleba and the paramilitary group Slovak Levies with the aid of Russia could protect Slovakia from such an occupation. The blog post later disappeared.

The website referred to the published order of an American federal agency that is looking for planners and designers of military equipment, topographic maps and research in Slovakia.

The author of the text concluded that this was a military base project in Slovakia. The Defence Ministry explained that Americans intend to help with the modernisation of the existing infrastructure of the Slovak armed forces.

In particular, it would concern airports in Sliač and Kuchyňa, though nothing has been signed so far. The tender is a result of informative talks with the US. There are no plans to build an American military base in Slovakia.

Czech soldiers in Lithuania are not allowed to speak Russian

“I spoke to the guys from the Czech army who came back from Lithuania. Before they left, they went through a training that they must not speak Russian by any means…” A status from March 8 on the Facebook profile under the Czech name Johanka Mydlářová is accompanied with a picture of a girl giving an obscene sign and wearing a T-shirt with a picture of the Russian president.

More than 250 people shared that status, and almost 300 “liked” it on Facebook. The status itself is a hoax and it seems that the profile is as well. It refers to the presence of Czech soldiers in Lithuania. The alleged author claims that the army instructed the Czech soldiers not to speak Russian to the locals because it could provoke negative emotions.

But upon their arrival to Lithuania they allegedly found that no other language than Russian is spoken in the country. The locals allegedly left them written notes in Russian and in English saying that they do not want the presence of NATO troops in Lithuania.

There is only one true fact about the text - the Czech soldiers are really training in Lithuania as part of the Training Bridge 2017 programme, and they are to return home on March 20, as Jan Šulc from the General Staff of the Czech army told the Sme daily. He clarified that Lithuanian is the language spoken in Lithuania, and that the soldiers also encountered Polish and Russian language. In fact, Poles and Russians comprise the biggest communities in Lithuania, after the Lithuanian majority.

The Czech soldiers took part in several public events, including the nationwide run in Vilnius and they were received positively by the public, according to Šulc.

The profile of Johanka Mydlářová spreads almost exclusively pro-Russian, anti-migrant, and nationalist posts. Some of them even refer to “white resistance”. But there was also a mention of the hoax about iodine pills and a radioactive cloud over Europe.

The picture of the girl giving the middle finger and wearing a T-shirt with a picture of Vladimir Putin has circulated among several websites and mostly refers to Serbian websites.

"War in Europe is on, ISIS mercenaries are waiting for orders”

A Turkish journalist spent a year and a half among ISIS. He found that the organisation is controlled by foreign secret service agencies and that the refugee crisis is in fact an ISIS operation against Europe.

This is the message of an article that people share as a PDF through email and it also appears on so-called “alternative media”. Only the article about it from the Czech website Halo Noviny was shared on Facebook by at least 2,000 people. It contains true information too, but an anonymous author added his or her own claims, which cannot be fact-checked. Including the claim that the refugee crisis is organised by ISIS and women and children among the refugees only serve as a cover-up.

The article uses the often-repeated information that refugees coming to Europe have mobile phones, and claims that ISIS equips them with the phones.

This and other similar information is presented in the article as “evidence”, even though it never explains where and how the information came from or why the author believes that the presence of mobile phones in the hands of refugees proves their links with ISIS.

German intelligence services in fact did inform that ISIS members have infiltrated among the refugees. But no reliable source has ever stated that there would be hundreds of thousands of them or that the whole migration crisis is an organised operation.

A military operation in which thousands of people die while they are being transported to their destination would be a tragic failure. The UNHCR informed that 3,771 people died crossing the Mediterranean in 2015. Last year, the number exceeded 5,000.

The text refers to the alleged work of the Turkish investigative journalist Mehmet Akula from the Al Ahram daily. The newspaper really exists in Egypt and is state-owned, but there is no trace of a reporter with that name on the internet. The only time the name is mentioned in the German news is in regard to the murder of a girl in 2004.

The Czech website Manipulatori.cz looked into the text and noticed that it has circulated since 2015 via “alternative media”.

Trump and the organs of dead children

American NGO Planned Parenthood performs abortions in the late stages of pregnancy and sells the fetuses for organs. And American President Donald Trump is ready to intervene.

Obviously, selling organs is illegal in the US and if it was really happening, the police should intervene rather than the president, and immediately rather than two years after the alleged video evidence was published.

Trump has only offered the NGO the possibility that he would not cut its financing if it stops performing abortions. But money from the government goes to reproductive health-related care, and not for abortions. The NGO has refused his offer.

The Hlavné Správy “alternative” website interpreted the news in this way: the NGO refused to provide the whole spectrum of basic health care for women and families and rather preferred abortions even in the late stages of pregnancy and selling the remains of the aborted children.

The fact is that Planned Parenthood also considers critical health care services to be the main area of their activities, while abortions only constitute some 3 percent of their work.

Hlavné Správy then goes on to cite the Center for Medical Progress NGO that allegedly “uncovered a huge scandal linked with the collection and trade with organs of aborted children in this company”. They give no more details. But the same organisation in 2015 published a video which allegedly shows its people talking to a doctor from Planned Parenthood about the trading of organs.

The company denies anything like this would be happening. It is legal in the US to donate organs of the deceased, for instance, for scientific purposes. This is true also for aborted fetuses. But it always happens only with the consent of the mother, the company claims.

In some cases the company receives reimbursement of the costs of the transport of the bodies to research centres, and this is what the doctor on the video was referring to when he mentioned the price of 30 to 100 dollars.