Will you get a cold shower or a whipping this Easter? 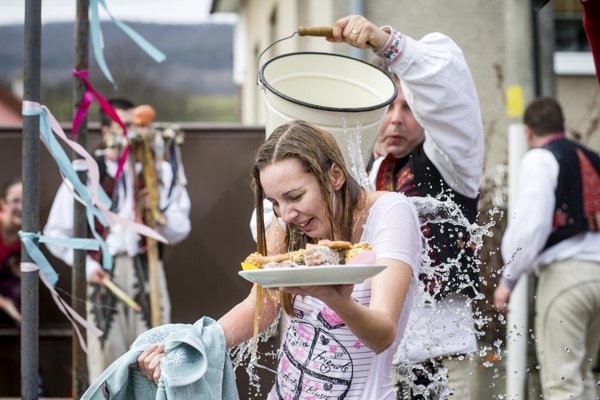 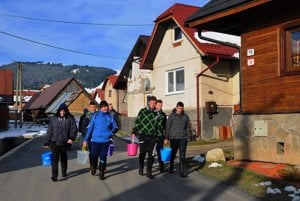 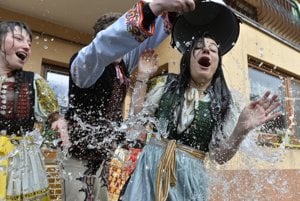 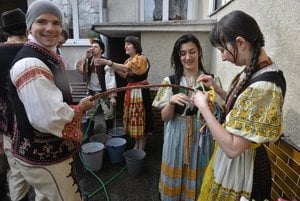 Slovakia can be thought of as a crossing point of two Easter traditions: whipping and water-pouring. Whipping is common in western Slovakia, just like in countries to the west - Austria, Germany, and the Czech Republic, but also part of Poland. In eastern Slovakia, men would typically pour water on girls, like it is common in another part of Poland, Hungary and Ukraine, explained ethnographer Kornélia Jakubíková.

“The line between these two forms runs somewhere in the middle, through central Slovakia,” Jakubíková told The Slovak Spectator. “Currently, when people move within Slovakia, traditions are mixed and usually both of them are performed.”

“Old traditions say to pour water on the girls but nowadays only perfume is used,” Lakatos said.

Whether whipping or water is used, the men are traditionally rewarded for their “Easter services”. In Hungary, women usually give them an egg, a piece of cake, or a shot of ‘Pálinka’, a typical Hungarian fruit brandy distilled from a variety of fruits, according to Lakatos. Easter eggs have changed over time. In the past, they were actual eggs, painted and decorated; nowadays they have been replaced by chocolate eggs. It is also common to give money, said Lakatos.

Petra Darovcová, from the Czech centre in Bratislava who originates from Moravia, recalled typical habits as splashing water at the girls as well as whipping them with willow whips, in Czech called ‘pomlázka’.

However, going further west of the Czech Republic, pouring water is not typical at all.

“In Prague, specifically, men only whip women with a willow whip,” said Klára Mathé, who has also worked in Czech centres in Bratislava but comes from Prague.

In Poland, both traditions occur mixed together, known as śmigus-dyngus. But this could differ from region to region.

“Whipping and water-pouring may look like different traditions, but in a sense they are the same,” Jakubíková said. Whipping should banish evil and diseases and ensure that girls will be healthy, fresh and smart. Water is the same, symbolising purity, health and fertility.

This tradition was applied mainly to young women as they were bearers of new life. Old women and small girls were left out, Jakubíková added.

Bunny is not Slavic

There is also new tradition appearing in the countries of Central Europe, the search for hidden chocolate eggs in gardens.

“Children love this so much, but for us adults it is something new. I do not remember growing up with this tradition,” said Vilma Anýžová, the head of the Czech Centre in Bratislava for The Slovak Spectator.

However, Jakubíková explained that while this tradition is not typical for Slavic people, it is not new in this territory. Egg hunting is typical for Germanic people. In the past some towns in Slovakia were home to a large number of German inhabitants, so they probably brought it here that time.

“However, it’s true that due to globalization and commercialization, that tradition may be revived now,” she adds for The Slovak Spectator.

When buying Easter sweets, another non-Slavic Easter symbol is on the shelves of shops, which most of the people do not consider ‘foreign’ these days.

“The Easter bunny is a cult animal of old Germans, specifically of ancient Germanic goddess Ostara,” said Jakubíková, explaining that this symbol was dominant in the spring as a symbol of fertility. Slavic symbols are chickens, eggs and lambs.

In Hungary, typical Easter food is ham served with horseradish, boiled eggs and "kalács", a kind of braided sweet bread, said Lakatos, adding that some people eat fish but in general everyone cooks what they like.

Czechs serve nettle stuffing, smoked meat and sweet cake in the shape of a lamb and, same as in Hungary, braided sweet bread. The Polish Easter table would not be complete without eggs, "zurek" (a special soup of rye flour, potatoes and white sausage) and ham.

Slovaks used to serve lamb meat for Easter but nowadays there is usually only a cake in the shape of a lamb, said Jakubíková.

However, there are no strict differences when it comes to food. The main principle is: eat everything that was forbidden during Lent, Jakubíková noted. That means mainly meat, eggs and also dairy products in some churches.

“Those in the Orthodox and Greek Catholic Church could eat everything that was consecrated before, that’s why they were bringing baskets with different types of food to church for Easter,” explained Jakubíková.

On Saturday evening they put the baskets in the church and in the early morning, at 4 or 5, the food is consecrated and eaten for breakfast. In some churches it was legit to start the celebration either on Saturday night or Sunday morning, she adds. Blessing the food in church is still the a strong part of Polish tradition.

Easter is less favoured than Christmas among the youth. Girls hate it and boys are less involved, Jakubíková cited the results of a research she conducted.

“I remember in the village on Easter Monday, when I looked out of the window, there were groups of guys walking from the house to house. Today the street is empty, women stay at home just to stay dry,” Jakubíková explained.

When this tradition also acquired an economic function (giving money as a reward), the holiday grew into a family event.

Tradition as they were known some hundred years ago are now getting forgotten.

“For example, burning of “Judas” in the front of the church on White Saturday. Fire is a purifying element and in the fire all old things from the church were burnt, and somewhere also the figurine of Judas was put in the fire,” recalled Jakubíková of a tradition she has not seen for a long time.

On Thursday before Easter, bells in the churches were “tied” as a symbol of Christ’s martyrdom. Instead of bells ringing, boys would walk around the village with rapkáč, noise makers, the noise of which was meant to banish evil.

Old beliefs have it that one week before Easter is a ‘magic time’, when all wounds will be healed connected with the healing wounds of Christ following his resurrection. People grafted trees, castrated rams, marked animal ears and cut their hair.

Where will Easter go?

Easter is the biggest Christian holiday but nowadays people celebrate it as a holiday of spring, not necessarily connected with visiting a church. This is particularly true for the Czech Republic, which is less religious than Slovakia or Poland.

Also, people spend holidays differently than they use to do in the past, less focused on traditions.

“The holiday used to be a day of social obligation,” said Jakubíková for The Slovak Spectator.

One third of Slovaks consider Easter traditions to be too old-school, while one quarter believes that they are a good way to earn money or entertain children, according to research for the Poštová Banka bank on a sample of 504 Slovaks in the spring of 2017.

Although Easter is not as favoured among people as Christmas, for example, as folklore revives today in decoration and fashion, maybe one day Easter traditions will revive again.

“People need something different than everyday life sometimes, they need tradition, to behave differently on one day than during the rest of the year,” Jakubíková said, adding that this could lead people back to traditions.