Slovak theatre in London offers a taste of home

The Slovak Theatre in London / Slovenské divadlo v Londýne has received an honourable mention at the recent competition for amateur, student theatres held by the Akademický Prešov. 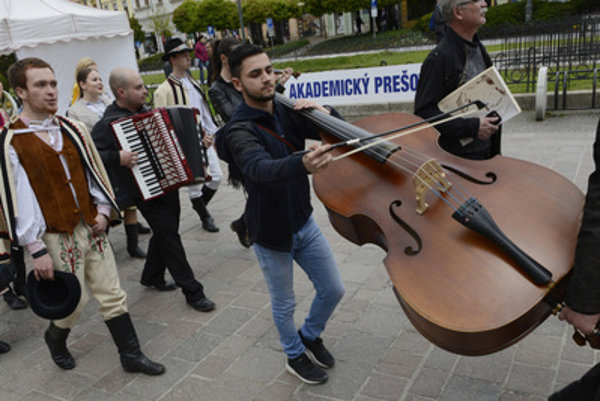 This theatre offers expats in the UK performances in Slovak, the TASR newswire wrote on May 3 – adding, however, that performances in English have now been added after a growth in demand.

The theatre group was founded eight years ago by a young Slovak woman, Juliana Sersenová, who arrived in England and in her leisure time started to unite expats and make art. The group's logo is composed of two halves of a heart symbolising the life of migrants who must divide their activities and commitments between two countries. They spent their first four years as an amateur group associated around the Slovak Catholic Mission in London.

„I had some ideas which I wanted to implement and I invited mainly my art-loving friends to join me,“ Sersenová told TASR. „We managed to stage one performance a year.“

Starting with plays in Slovak – with all scripts written by her – they changed around the roles to make it more varied. Then, other people from different parts of London joined in, discovering the group through ads and social networks. Gradually, the word started to spread and they gained a regular audience. Then Sersenová arranged a theatre piece called ‚Migrants‘ which already included more experienced theatre-makers with previous contact with the stage.

From a small group to a bi-lingual theatre

Slovak students from theatre academies who could not find an outlet for their education started to flock. Then the Academy for Women / Akadémia pre ženy performance – the piece that was successful at the 51st year of the Akademický Prešov competition last week – was born. The script is based on the true stories of Slovak girls involved in human trafficking, with three female characters and one male. All actors study at universities in the UK.

„Over the course of the years, we have found that not just Slovaks and Czechs living in London but also their foreign friends are interested,“ Sersenová told the newswire. „Thus, we came to translate or add subtitles for the wider public but ultimately, the practice of rehearsing each performance in both languages has been established. Our specific is that we stage our own plays and we perform them both in Slovak and English.“

They do not perform only in London but travel to meet expats around the UK. They want to bring fresh Slovak culture, and in a way, provoke. Slovaks often close themselves off in a sort of bubble when abroad, Sersenová explained and as they do not understand complex theatre in English and miss simple, understandable pieces, they stop visiting theatre. „This is when we arrive,“ she summed up. „People appreciate this, it is a great spiritual refresher when they experience Slovak culture far from home,“ the founder said.

With their expat connections, they also visited Brussels with ‚Migrants‘. This June, they will return – with a new piece about prostitution. From time to time, they also play in Slovakia, for their families and friends at home.