Bratislava now has a musical guide

There is no direct information concerning where six-year genius Mozart played in Bratislava but the places where Salieri gave his concerts are known. 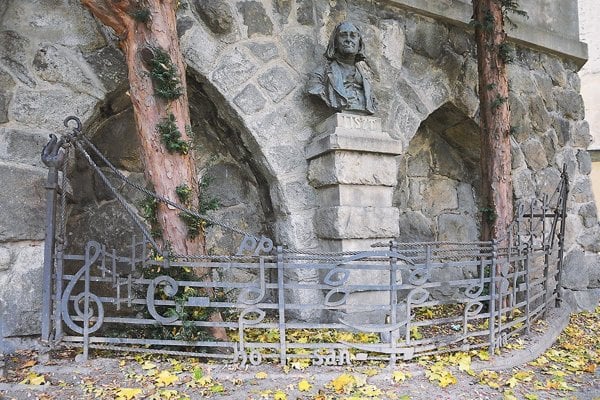 The memorial to Franz Liszt with the forged lattice and a few notes. (Source: Martin Janoško)
Font size:A-|A+

Bratislava has a rich musical history but it is often unknown even to native Bratislavans. The list of prominent musicians who played here boasts Mozart, Haydn, Beethoven, Liszt and Salieri. Also only a few people know that composer and pianist, Johann Nepomuk Hummel, was born here. These facts tend to be known only by experts. At the Music Centre Slovakia, which is a state organisation supporting Slovak musical culture, they decided to change this and have published the very first musical guide to Bratislava.

“We published the guide because such literature has been missing in Bratislava for a long time,” said Pavol Šuška, editor of the guide, from the Music Centre Slovakia.

The guide is dedicated to tourists but also to common Bratislavans so that they can learn about the vivid contacts with world culture that Bratislava used to have and what it still has to offer to lovers of music.

The idea to publish the musical guide arose in 2015. Its authors wanted to publish it on the occasion of the Year of Slovak Music which Slovakia marked in 2016. In the end the book was published at the turn of 2016 and 2017. The authors of the 144-page book are Zuzana Godárová, a tourist guide in Bratislava and Vienna specialising in music, and Ján Vyhnánek, a tourist guide who, in his free time, researches archives and old materials and keeps bringing new information to tourists.

The authors and the publisher selected a photo of a bust of one of the most important musicians, pianists and conductors – Franz Liszt, for the cover of the guide.

“Sometimes he is called the musical patron of Bratislava,” said Vyhnánek.

Liszt had a very close relationship to the Bratislava of the 19th century, at that time called Pressburg. This is because his musical career started here and he remembered this all his life. 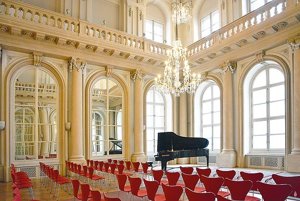 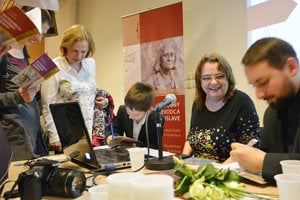 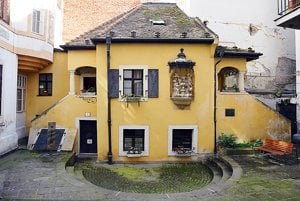 When nine-year old Liszt, who already at that age was a piano virtuoso, played at the apartment of Count Michal Esterházy in the so-called De Pauli Palace, now the University Library, in 1820, he so enchanted attending Hungarian nobles, that they decided to support his further musical studies in Vienna. This way they helped him to start his musical career.

“Liszt never forgot this and he often returned to Bratislava even after he became a famous pianist,” said Vyhnánek, adding that Liszt later inspired his love for this city in his students and thanks to this, Bratislava enjoyed an inflow of musicians during the late 19th century and the beginning of the 20th century.

Liszt has several memorials in Bratislava. At Rudnayovo square there is a memorial with his bronze bust by Viktor Tilgner. It is enclosed by a forged lattice displaying a motif of a stave with the first phrases of the violin part of “Hosannah” from his Hungarian Coronation Mass, which Liszt himself conducted in the nearby St Martin's Cathedral in 1884.

Also on the University Library there is a plaque marking the concert he gave here when he was just nine years old and his statue stands in its courtyard.

The chapter Concert Venues of Bratislava is devoted to places where music has been played in Bratislava.

“The oldest concert hall which still serves this purpose is the Hall of Mirrors in the Primate’s Palace,” said Vyhnánek. “The first concert took place here in 1780. The second concert was attended by Maria Christina, the daughter of Maria Theresa, who, with her husband, royal governor of Hungary, Albert of Saxony-Teschen then lived in Pressburg.”

The authors also listed among the palaces, churches and other places where music used to be played, the historical building of the Slovak parliament, the Župný Dom. Renowned musician Ján Albrecht (1919-1996) valued its music hall as having the best acoustics in the city.

“Alas, today it is only rarely used for concerts,” said Godárová.

Apart from historical concert venues the authors also included in this chapter, churches and palaces as well as former industrial buildings turned into cultural venues and music clubs. For example the Design Factory and the Refinery Gallery, Stará Tržnica (Old Market Hall), and the V-Klub, Subclub and Fuga music clubs.

The chapter Orchestras, Ensembles and Choirs brings a selection of 20 bodies of various genres. The authors described their selection as very difficult as they were limited by space in the book.

The chapter Festivals and Concert Series is an overview of the most important music festivals of all genres taking place in Bratislava.

“To write this chapter was a bit problematic because festivals have a life of their own and while we were working on this book some of them actually ceased,” said Vyhnánek.

The chapter Music Museums is one of the shorter ones as there are only three museums dedicated to music in Bratislava. They are the Johann Nepomuk Hummel Museum, the Music Museum of the Slovak National Museum and the Ján Cikker Museum.

“We hope that a fourth museum – the museum in the Albrecht House – will be added to the list shortly,” said Godárová. “This building is currently undergoing a thorough reconstruction.”

The chapters Music Shops and Other Music Institutions are also short, as Bratislava does not have many of them.

Normal readers will probably find the chapters Musicians’ Places of Eternal Rest and Musical Walking Tours to be the most interesting.

For the chapter about musicians buried in Bratislava, the authors visited cemeteries and found the actual graves.

“It sometimes happened that when arriving at a place where a grave we were looking for (listed at the cintoriny.sk website which maps all the graves) should have been located, we did not find it,” recalled Vyhnánek, adding that the grave did not exist anymore maybe because nobody had paid for it.

The authors also included maps and information about which sector of the cemetery the grave is located, in the book.

Therefore, readers can easily find the graves of, for example Alexander and Ján Albrecht at the Ondrejský Cemetery, Lucia Popp and Ján Cikker at the Slávičie údolie Cemetery, Ján Levoslav Bella at the Kozia Brána Cemetery, Gejza Dusík, Alexander Moyzes and František Krištof Veselý at the Martinský Cemetery, Jaro Filip and Marián Kochanský in the Urn Grove of the Crematorium and the grave of Karol Duchoň at the Vrakuňa Cemetery.

For the chapter Musical Walking Tours the authors created three tours across the city centre. The map with marked places is also very helpful.

The reader will discover in this chapter when the first concert in the Hall of Mirrors took place as well as that the one-time very popular Hall of Representatives does not exist anymore. It used to stand in the courtyard of the Old Town Hall.

It also contains the information that in 1767 Joseph Haydn gave a world premiere of his comic opera, La canterina (The Songstress) in the Archbishop’s Summer Palace, where the Slovak cabinet sits today. The performance was also attended by Maria Theresa and her son Joseph II.

The authors also list here the Pálffy Palace at Ventúrska street. Here there is a memorial plaque commemorating the visit of a prodigy, six-year old Wolfgang Amadeus Mozart, to Bratislava between December 11 and 24, 1762.

But the authors note that it was probably another Palace in which the small genius played at that time.

Actually there is not very much direct information about the stay of Mozart and his father in Pressburg and the concert the prodigy allegedly gave here.

As Godárová specified, a letter has been found dating from one day before the father and son departed for Pressburg, i.e. from December 10, 1762, in which the father writes that he is not sure whether they will earn sound money in Pressburg.

“This is proof that they came here to give a concert,” said Godárová.

However, she considers the greatest proof that the prodigy visited Pressburg the letter written by Wolfgang Amadeus Mozart himself from August 21, 1773, to his sister in which he mentions Mr Griebich, with whom he made acquaintance in Pressburg and later met in Vienna.

Unfortunately, neither the father nor the famous musician mentioned definitively in their correspondence the palace in which the concert took place.

But the places where Mozart’s alleged rival, composer and conductor Antonio Salieri, played are known – the concerts took place at St Martin's Cathedral and the Hall of Mirrors at the Primate’s Palace.