The strike due to start on June 20 will be the first of its kind in the history of Volkswagen in Slovakia.

Talks between the Volkswagen Slovakia (VW SK) management and the Modern Trade Union Volkswagen on Monday afternoon, aimed at averting a full-fledged strike planned to start on Tuesday morning, June 20, have failed.

“The final offer presented by the VW SK management this afternoon was unacceptable,” said trade union chief Zoroslav Smolinský as cited by the TASR newswire.

VW SK managing board chairman Ralf Sacht, informed that the trade union has rejected an offer to increase salaries by 4.5 percent this year and by another 4.2 percent next year. The management improved its original offer by 0.2 percentage points.

“I believe that we presented a good offer,” said Sacht. “We made a forward-looking step, but without any success.”

The trade union wants to see a salary hike reaching as high as 16 percent within two years. 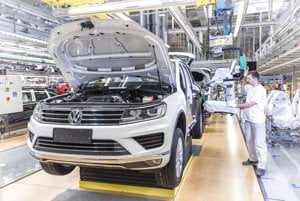 WV SK sees the 16-percent hike required by the trade union as inappropriate as it would endanger their competitiveness and the future of the company as well as the stability of the work place.

Smolinský has declared that they are ready for the strike to last more than one or two days, adding that employees at VW SK are demanding better financial and working conditions against the background of a situation that has seen failing social dialogue and personnel policy at the plant.

Prime Minister Robert Fico (Smer) views the demands made by the plant’s employees as justified.

“You can look at it from two perspectives.” Said Fico as cited by TASR. "The company salaries are rather high in comparison to the average Slovak level ... But given that this company is among the best in terms of quality, producing luxury cars and with high labour productivity, why should a worker in Bratislava receive half or one third of the pay of a worker in Germany or any other western European country who may have lower labour productivity and who produces non-luxury cars?”

That said, Fico regards the talks on salaries at Volkswagen as an internal issue between the plant and the trade union.

“I won’t interfere in the inner workings of the trade union and the factory because this is an internal matter,” said Fico. “I respect the right to hold a strike.”

Smolinský estimated that about 2,000-2,500 employees will join the strike on Tuesday.

VW SK employs about 12,300 people. The average gross monthly wage, including bonuses and benefits and excluding managerial salaries, is €1,800.

First strike at Volkswagen in Slovakia

The strike, due to start on June 20, will be the first ever of its kind in the history of Volkswagen in Bratislava.

The situation is causing growing concern for former Volkswagen Slovakia board of directors chair and incumbent Automotive Industry Association honorary president Jozef Uhrík. He served as part of the company’s management as of 1991 and chaired the board of directors in 2002-2005.

“I’m watching the situation at Volkswagen Slovakia with great concern,” said Uhrík as cited by TASR. “A potential strike might not only profoundly damage the interests of employees per se, but even the national economy as a whole.”

He recalled that during his tenure at Volkswagen Slovakia, two such cases emerged in which unionists raised outsized demands and, based on the decision of the corporation’s management, production was shifted to a different country.

The first such case occurred in Pamplona in Spain. Because of a strike there, production of the Volkswagen Polo was transferred to Slovakia. The whole transfer was carried out rather swiftly, according to Uhrík.

“It was then that some of the production of the SEAT Ibiza was shifted to us in Slovakia for two years (2003-05),” said Uhrík, adding that many employees in Spain lost their jobs, and the transfer had an adverse effect on economic results. “Therefore, I’d like to appeal to both parties, particularly the unionists: sit at the negotiating table and find a compromise.”

In his opinion a full strike will benefit no one and will resolve nothing.

“Our economy is buttressed by the automobile industry,” said Uhrík. “We can’t afford to gamble with such a position, particularly when Volkswagen Slovakia currently employs 12,300 people, while another 50,000 work for sub-suppliers. A strike might cause a loss of trust on the part of the firm’s management, which was quite hard to win over, and now we might lose it easily.”

A potential shutdown of production at VW SK plants could impact the Slovak economy.

“Even a [factory-wide] holiday at Volkswagen affects Slovakia’s [economic] figures, because the plant is a flagship of our economy,” said Finance Minister Peter Kažimír. “Any interruption to the usual production cycle at this plant could affect the overall economic figures for the quarter concerned.”

The ministry’s Financial Policy Institute (IFP) estimates VW SK’s daily revenues at €6.3 million. IFO director Lucia Šrámková said that 12 consecutive strike days at the plant could result in an “impact that is seen in GDP growth, specifically 0.1 percent of GDP”.