Religion the most productive way to integrate Roma

A wave of religious conversion flows through Slovakia's Roma settlements. Spiritual organisations may show more success at integrating Roma than municipalities and social workers do. 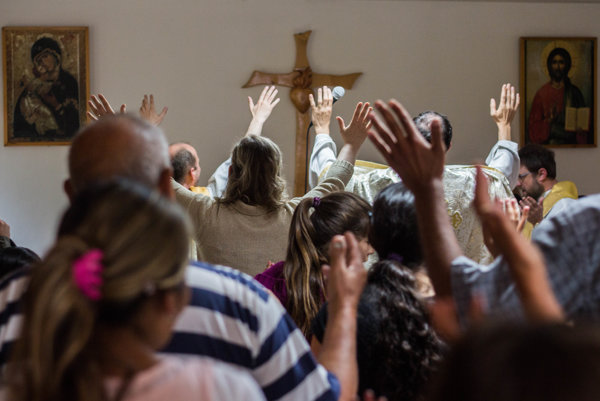 In Čičava, a small village in eastern Slovakia, a priest is leading a Roma integration revolution. Ten years ago Martin Mekel moved with his two daughters, son and wife to the house that today also serves as a formation centre for Roma. The ground floor consists of a kitchen, a large common area for activities and masses and a room with bunk beds for students who want to focus on their studies. Pictures of saints colour the concrete walls, and wooden carved hearts remind visitors of God’s love.

Martin, who had first studied physics, is a tall, thin man with a gentle voice. When he smiles, he squeezes his eyes together instead of opening his mouth. He looks tired but not without reason. The past decade has been one of early mornings and late nights. He organises advisory meetings, workshops, music sessions, festivals and excursions, in addition to leading four masses per week. All of his work is aimed at the Roma minority. But for Martin, these activities are nothing more than a doorway to what he says is more important: building an identity in order to achieve social change.

Today the Greek Catholic Formation Center for Roma is working with approximately a thousand Roma across more than 13 villages. According to their own estimates 70-80 percent of their teenagers are attending high school (non-compulsory schooling after age 15), and about 30 students are enrolled in university. Those numbers are high compared to some villages, where only a few Roma teenagers, if any, are attending high school. 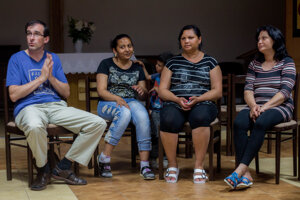 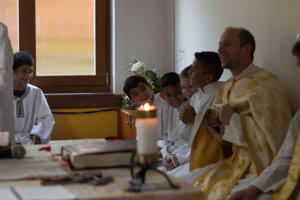 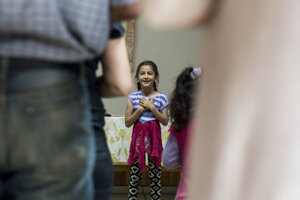 Sára is one of the students attending university. She lives in what is called the downtown ghetto of Čičava and studies pedagogy in the nearby city of Prešov. She wears pink shoes that match her sweatpants and socks in the same shade of blue as her T-shirt.

“Seven years ago, when I was 13 years old, I first came into contact with the Formation Center. Now I know I am not alone. And it has changed me. Without religion I would maybe have finished high school, but a university? Certainly not.”

Stories like this one are well-known throughout Slovakia. No matter where you go on the eastern side of the country, if you drop the name “Čičava”, you will see lights in the eyes of social workers. Many community centres have already started to work with the Greek Catholic Formation Centre for Roma in the hope that they will offer a solution for their own local integration problems.

Daniel, a social worker in Sveržov, was so delighted by Martin’s work that he couldn’t stop talking about it.

“What Martin and his team are accomplishing is unbelievable,” he said. “Roma in Čičava are going to school, working and creating art.”

Missionary work as an effective tool

The community centre of Sveržov recently decided to give the religious path a try. Igor, a priest working in another branch of the Formation Centre, visits the local children.

“The first time went great, so now we are inviting him every Wednesday,” says Daniel. “We hope he can lead our Roma minority to God. I believe it is the most productive way of changing them.”

Social scientist Tatiana Podolinská, who has researched the influence of religion in Roma integration, believes Daniel might be right. Podolinská observed the activities of 19 churches and religious movements in Slovakia, which together count over 10,000 actively participating Roma members. She says that missionary work has the potential to be an extraordinarily effective social tool and has been proven to deliver positive social change.

And the number of participating Roma is only rising. The Greek Catholic Formation Center for Roma is currently organising new missions in Ladomírová, Krajná Bystrá, Varhaňovce and Abranovce. This is in addition to the 13 other towns where the centre is currently active.

“Our mission is growing, and we are becoming an organisation with wide-spread influence,” Martin said.

A strange, strident sound echoes through the hallway from the classroom on the second floor.

“Don’t worry,” says Martin. “Our leaders are holding a workshop. They are simulating situations that could occur while they are doing activities with children.”

“It is impossible to connect with a large group of people at once. That is why we work with small groups, where people know each other and are able to openly share their experiences and problems.”

Each of those groups is led by a community member, who is given particular tasks and responsibilities. Some members focus on evangelisation, which is the act of sharing and teaching the Gospel, while some work with youngsters or lead courses and workshops.

“We are trying to recognise certain characteristics and skills in people and work with that,” says Martin.

Outside, one man is sweeping the floor, while a few others are fixing a car.

“Father Martin showed us that it is good to do something. We are not used to that,” says Stano. When asked if he likes to work, Stano says, laughing: "Yes, if it is not too hard.”

The reason that Ylavk chose the religious path is hard for him to express in concrete words. But according to Rita Izsák-Ndiaye, UN Special Rapporteur on minority issues, who is herself Roma, the explanation can be found in the harsh living conditions many excluded Roma experience.

“People in difficult situations can be touched more easily, as they are often in more dire need of spiritual and emotional support and strengthening,” she explains. “Besides that, religion also plays an important role in organising life. After years without routine, there is often a desire for that kind of comfort.”

The others nod in agreement while listening to each other and eating chicken curry provided by the centre. They all seem eager to tell their own stories. Thomas gets up and starts speaking, but Radko, a priest who also lives in the building, stops him to point out Berti was first. Everyone starts laughing, and Thomas sits back down, hanging his head.

Radko says the problem with most community centres is that are trying to transform Roma from the outside.

“Instead of focusing on meaning, they impose ‘white solutions’. If people don’t find a reason for themselves to study or get a job, those solutions will not be durable”, he said. “If we just built a chapel in a community, it would be destroyed within a month. Wood would be used as firewood, and what could be sold would be sold.”

Tatiana Podolinská agrees with this. In her research paper Religion as a Path to Change, she writes that state programs mostly focus on changing the external environment, while religious movements aim to transform people themselves. She explains that when people experience an internal change, they automatically redesign their social world in line with their new visions. They will identify with a vision from an internal change more than they would with a change made for them, and this results in higher chances of success.

But since the opportunities for Roma within socially excluded communities are extremely limited, even a significant change ‘inside’ might not, under unfavourable conditions, be demonstrated ‘outside’. That is why Podolinská recommends a combination of two types of social changes instead.

Around 6 o’clock the mass began. Martin, Radko and their guest priest Ladislav are wearing white robes. Before the mass started, Martin’s eyes fall on two boys sitting in the back, and he convinces them to take part in the ceremony. They proudly process next to the priests with about 10 other altar boys.

The room is packed with young people, but in the back of the chapel, two elders are participating with as much vigor as their younger peers. In the front, Radko is joking with some of the altar boys. They are sitting shoulder to shoulder, and the line looks like a moving caterpillar as they push each other playfully.

Unlike in a conventional Greek Christian mass, no one is sitting still. Everyone is dancing and singing to show what they are expressing.

“We customised the mass for them. It has to be joyful and full of hope,” explains Martin. “It’s a matter of belonging. If they don’t feel like they belong here, all the other efforts will be a waste of time.”

Between prayers and songs, Martin addresses people individually and sometimes asks them to come to the front. Here, they are given a voice and a face in the community.

“What does Jesus expect from you in life?” he asks. But most of the people in the room do not know what to answer.

After the mass, Martin expresses his disappointment.

“It is a pity, but it is a way of provoking them, making them realise it is important to think about what they want in life,” he explains and adds that influencing others is a matter of talking, talking and talking about the same thing over and over again.

Martin changes back to a blue shirt that reads “Faith can move mountains”. He rushes to his car without giving himself a break, shoving a sad snack of two biscuits into his mouth while checking his watch multiple times. He is heading to Sol’ where he will be leading an advisory meeting.

In the town’s local Greek Catholic Formation Center for Roma, 19 people are sitting on hard chairs in a circle. It is so quiet, you could hear Jesus breathing on the cross. Martin talks with them, asks them questions and offers practical advice.

“Think about what you want to do and do it," he says. "If you want to do evangelisation, do it. If you don’t, find something else you like to do. Imagine if I woke up every day and asked myself whether I want to be a priest or not."

The people in the circle laugh, not because the statement is so funny but they seem to really love Martin.

“Personal charisma and a huge amount of energy are hardly reproducible and cannot be generalised as a systemic tool for social change,” Podolinská says.

It seems that religious movements will only be gaining more influence on Roma in Slovakia and the rest of Europe. According to Podolinská, it would be advisable for authorities and social workers to take a closer look at the strategies of religious movements in the development of effective social instruments to integrate Roma.