The first ethnic group known by name which lived on Slovak territory may have ended differently than previously thought, shows an exhibition presenting many artefacts, interactive features and models. 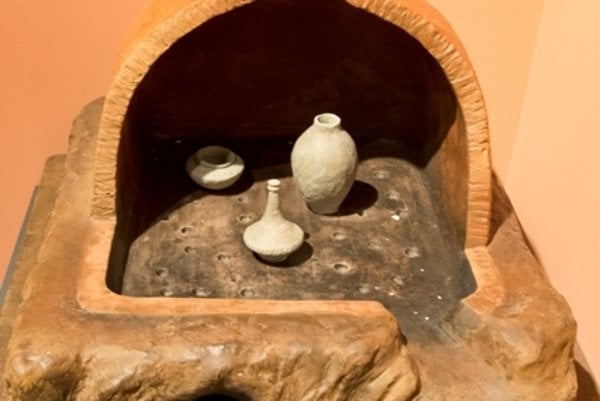 In the underground spaces of the Bratislava Castle – in the area where many of the items displayed were found – the Celts from Bratislava exhibition shows how they lived, as well as how their era in this region ended, and how the Slovak capital looked more than 2,000 years ago.

The Celts, who originally came from somewhere between today's eastern France and southern Germany, expanded all over Europe (all the way to current Anatolya in Turkey), including a part of modern Slovakia, where they arrived around 400 BC. The first findings are from Stupava, Bošany and Horné Orešany, one of several curators and catalogue's authors, Igor Bazovský of the Archaeological Museum of the Slovak National Museum (SNM), said at the launch of a catalogue accompanying the exhibition.

These people were excellent craftsmen, according to Bazovský, and the exhibition lasting until October 1 outlines various aspects of their skills. It mostly focuses on the 1st century BC when the Boii, a Gallic tribe, arrived in this area. They stayed in western Slovakia, and the area around Bratislava has special strategic importance as a gate to the Carpathian Basin. The locality of Devín divided Celts into those living in today's Austria and those living in Slovakia. The local settlement lay at the crossroads of merchant routes.

A Celtic acropolis, a defense settlement, was located directly where is now the Bratislava Castle. Local findings confirmed active exchange with Romans. The local tribes were skilled minters and Celtic coins, with biatecs (named probably after the local ruler) made in Bratislava in the 1st century BC being the most famous, have been found in profusion. Both big silver coins – which were used to preserve assets and found in treasures – and smaller coins with minor nominal value were minted, used and found.

Nearby Devín was also very intensely and densely settled during this period – called the La Tène era, or La Tène culture – and some vessels and features typical for the area and culture have been discovered, for example storing reservoirs in the form of pits drilled into rocks or dug in the ground. These are typical for Devín, Katarína Harmadyová of the Bratislava City Museum (which operated the Devín Museum) noted. “Wherever we dig in the Devín area, we find a Celtic shard,” she said. Later, her colleagues added that the same can be said about the Bratislava Castle. A variation to storage reservoirs were big storage vessels; it was not easy to make them on a pottery wheel, not to mention baking them, as they were very big. Apart from impressive storage vessels, tiny items, such as jewels or sacrifices to gods, were also produced. Although Devín is not known for coins, a treasure of 70 coins was found here accidentally in 1998. Several comprehensive treasures were found here. The findings suggest that Celts liked bright colours for their clothes, and were fond of checquered patterns.

How did Celts perish?

Rather than any single disaster or conquest pointing to an abrupt end of Celts in the Devín area, it seems that the Dacians who arrived in the 1st century AD pushed them more northwards, or partially mixed with the Celts.

At the Bratislava Castle itself, archaeological research was interrupted in the 1970s and renewed only in 2008-2010 and 2013-2014. Important findings include several walled constructions – mostly three-storey buildings – which did no survive to the present as the core of the stones were used for the construction of newer buildings, e.g. a Roman church. It is also worth mentioning that these buildings were built for Celts but not by Celts; rather, they were built by ancient, mostly Roman builders and they also include elements typical for Romans, Barnislav Resutík of the City Office for Monument Preservation said. The Bratislava settlement was an oppidum, a large fortified settlement.

One of the exhibition's sections also targets interesting phenomenon, Celtic treasures found in this territory. One of the biggest is the treasure found in 1923 under the then Tatra Banka building, i.e. the current Culture Ministry headquarters, Anton Fiala of the Bratislava City Museum explained, adding that these treasures (several of them were found in Bratislava) were mostly composed of coins. 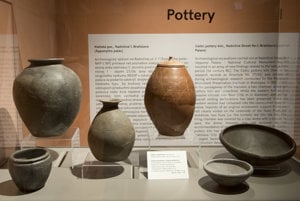 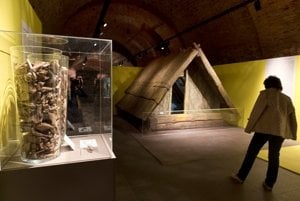 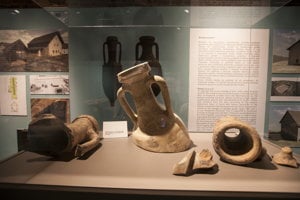 For a long time, it was supposed that the Dacians who caused the end of the Celts in Slovakia, with the territory called the “Boiian Desert”, due to the level of destruction the former left in the living space of the latter. However, now experts rather opine, thanks to recent research at Bratislava Castle, that Dacians gradually mixed with the Boii and who took over their culture and lifestyle. Celts lived here for some time after Dancians were in the area and came under pressure from German tribes from the north and of Romans from the south. Romans, however, colonised this territory with the aim of making locals citizens of their empire and the territory a Roman province. Thus, it shows that Celts lived under Romans for 200 more years at least, and rather than disappearing dramatically, they adapted and became absorbed by the Romans, Bazovský summed up. The destruction of the Celtic settlement is thought to perhaps be the work of natural causes.

The exhibition includes, apart from authentic artefacts, also models and visualisations describing the life of local Celts two millenium ago.

There is also a catalogue of 200 pages accompanying the exhibition – for now just in Slovak, but an English/German version is planned to be released during the summer.