Slovak who ran almost 5,000 km in 48 days: Many ultra-runners are humble people

Kaneenika Janáková has completed the world’s hardest run. She told The Slovak Spectator about her career, but also about the place where she likes running in Slovakia. 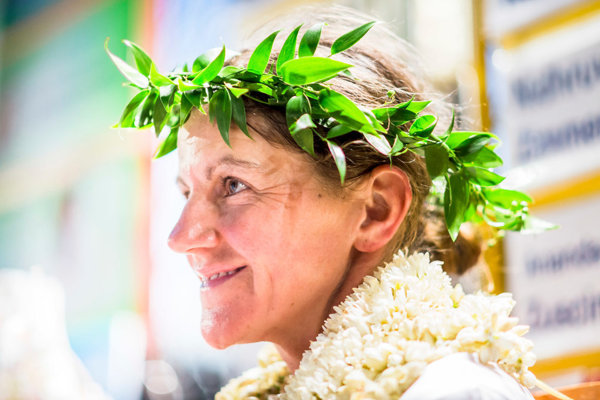 The Slovak Spectator interviewed the ultra-runner about her running career, her motivation, but also her unusual name.

The Slovak Spectator (TSS): Your name sounds very unusual for a Slovak. What does it mean?

Kannenika Janakova (KJ): I received my name Kaneenika from my spiritual teacher. In my late twenties I started to look for something more meaningful in my life and I came across Sri Chinmoy, who was a master of meditation, noted author, musician, artist, peace advocate and athlete. I was really inspired by his teachings and activities, so I became a member of the Sri Chinmoy Center. After some time, he gave me the name Kaneenika, which means “vision beauty of the inner eye”. By giving a spiritual name, Sri Chinmoy believed he could inspire the person to bring forward his or her best quality.

Kaneenika Janáková, a Slovak from the small village of Cerová, has lived in New York for ten years.

TSS: Why have you decided to run ultra-runs?

KJ: Sri Chinmoy, being a very good athlete himself in his youth but also in later years, encouraged his students to participate in sports. He wanted to demonstrate how the physical and spiritual can go together. So when I started meditating I started running as well. But of course I started with shorter distances and I never thought I would get into competitive running.

I started thinking more seriously about running in my late twenties. My first big challenge was completing a marathon. This was in 1996. My time was 4 hours 46 minutes. Nothing very impressive, but what was more important than the time for me was my feeling of happiness and satisfaction from accomplishing something new and big in my life at that time. But I didn’t stay with that marathon distance. I accepted new challenges. 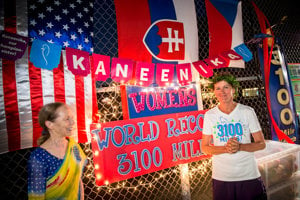 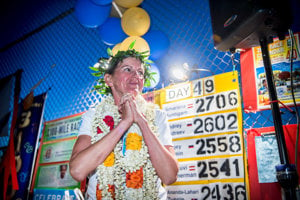 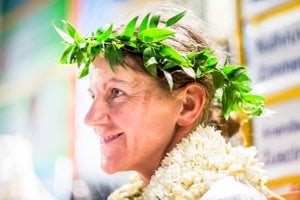 TSS: When did you participate in your first 3,100-mile race?

KJ: Between the years 1998 and 2014 I ran many 6, 12, 24, 48-hour races. After completing my first 24-hour race I felt a really strong inner urge to try something even more difficult. So I entered my first 6-day race in 2001. This was a totally new experience for me. I was doing 96.56 km (this equals 2.3 marathons) a day for 6 days. Physically it was really hard for me but at the same time, I could feel that besides the physical there is another level, an inner level helping me to overcome the exhaustion, pain and other obstacles. What was totally surprising even to me was that what I remembered most from the race wasn’t the physical suffering, but a genuine feeling of joy. After this experience I wanted to explore this dimension more and continued doing 6-day race. Later I added a 700-mile race, a 1000-mile race, 10-day races and in 2015 I entered my first 3100-mile race.

Some people might ask why you would want to continue doing this, why would you want to go through the suffering again and again. For me it’s a journey. Each one of these races has helped me unlock a door within me that helps me to know myself better, to know the world better or I should say to see the world as a better place. A few years ago after a very difficult race I was at a point when I thought I would retire from doing these races, but I had an experience, when so many of my friends but also people I didn't really know came up to me and told me how much inspiration they get from my efforts. Then I realized that I’m not doing this only for myself. 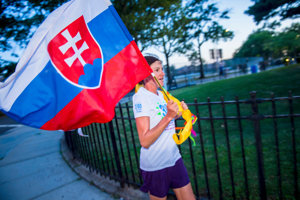 TSS: How do you prepare for ultra runs?

KJ: To prepare myself to compete in these races I have to do a lot of running of course. This means 3-4 months of an intense training schedule, consisting of shorter runs (8-16 km a day) during the week and then 80-100 km over the weekend, split between Saturday and Sunday. Besides running I include yoga, Pilates, strength training and stretching. I do believe that besides physical I also equally need inner strength in order to succeed. Therefore, I practice meditation. Meditation helps me to calm and control my mind as well as helps me to become more aware of my abilities and believe in my true potential coming from the inside.

TSS: In the Sri Chimnoy race you run for 48 days. How do you motivate yourself to keep running from 6 a.m. till midnight?

KJ: Motivation for me is completing a distance of 3,100 miles or 4,988km, of course. But it is hard to think about finishing a race when you know that you have almost 8 weeks ahead of you. If I start thinking of the distance or how many days there are left, my mind can think only about tiredness, pain and other reasons why I can’t complete the race. To conquer this, I have to trick my mind. I play games, imagining that I have to run only from one corner to the next, I talk to the trees and flowers along the course, I offer them my gratitude for being there for me. I smile at people who pass by. To stay in the moment, be happy and find joy in what I am doing. This is what helps me to get through.

TSS: What was harder – to keep running or to convince yourself every morning to get up and return to the circuit?

KJ: Getting up in the morning was very hard but on the other hand it was like going to work. You don’t particularly like it but you have to do it. And once I was out there on the course I knew I just had to continue. I had moments when I was thinking I just want to lie down under a tree and sleep for few hours but then I knew if I did that it wouldn't really get me anywhere. I’m always very focused in what I’m doing in my life. So for me entering a race means crossing the finish line as fast as I can and to do that I have to stay single-minded.

TSS: How many ultra runs have you attended in your life and with what success?

TSS: Do you have a favourite running path in Slovakia that you would recommend to our readers?

KJ: My favorite running route would be in the Little Carpathian Mountains in Cerová, the village where I grew up. This is where I did many of my first long runs when I started training for multiday races. And I still do it when I visit Slovakia. All I have to do is to run up the hill behind my parents’ house and there are the trails bringing me to the ruins of Korlátko Castle and then I can go for hours in any direction in the woods.

TSS: If anyone was interested in starting with ultra-runs, what would be your advice? Does it require a special training programme, or a particularly strong personality?

KJ: If anyone is inspired to try the multiday running I would recommend starting with 6-hour, 12-hour and then 24-hour races. Then you might get the feeling of whether you want to go further.

It definitely requires a training programme, which everybody has to find for themselves as we are all different. I don't think a strong personality is a necessary requirement. Many ultra or multiday runners are very humble and simple people. If somebody feels that this is something they want to try I would definitely encourage them to follow their dreams or goals. In my opinion it’s never too late to start something new and once you start never give up. It might not be easy but it is very rewarding. And this applies to any field of life. It doesn’t necessarily have to be running. When I was asked what helps me do these races, my answer was: “The belief that I can do this, the belief that there is an inner power helping me to do this and the belief in what Sri Chinmoy taught me that the human potential is unlimited.”