Kotleba will run for chairman’s seat in regional elections

He could have several opponents. 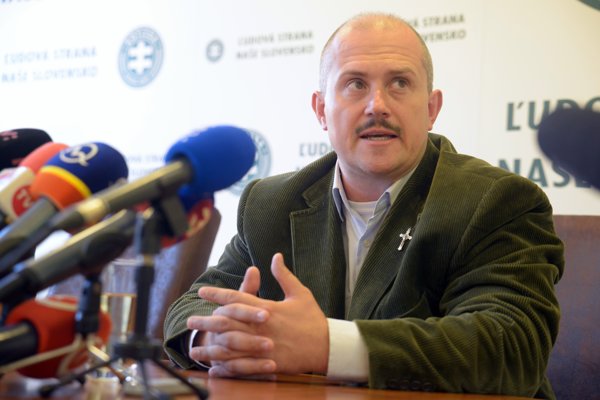 Marian Kotleba of the ĽSNS, the current chairman of the Banskobystrický self-governing region, stated that he is going to stand as a candidate in the coming election.

There were rumours in last weeks media that Kotleba did not intend to stand. The right-wing extremists announced their candidates for the chairman’s seats in other regions but held back in the case of Banská Bystrica.

His strongest opponents stated a few months ago that they are going to back out in favour of the strongest candidate facing Kotleba, according to the polls.

Some of the political parties as well as Smer and Most-Híd have already stated that they will support Ján Lunter, a producer of vegetarian products. He won the last poll made by the Focus agency, beating Kotleba.

Read also: Everyone against Kotleba? Appeal on candidates to connect Read more

However, it is not clear whether the other candidates will actually back out in favour of Lunter.

“The parties should wait until the announcement of Kotleba’s candidature. It could be that there will be three candidates for the seat of chairman,” said MP Martin Klus (SaS) for Sme Daily. He is also in the running for the seat of Banskobystrický chairman.

The head of the SNP (Slovak National Uprising) Museum and another candidate Stanislav Mičev also admits to the possibility that there will be two candidates fighting with the extremist Kotleba. It is important to mobilize people to vote, according to him.

Kotleba’s strongest rival candidates Lunter, Mičev and Klus agreed in September that they would give up the candidature in favour of the strongest one, however the memorandum documenting this decision has been signed only by Klus and Mičev for now.

Lunter's reaction to this has been that not-signing does not mean that he will not keep his word.

The regional elections are set for November 4.