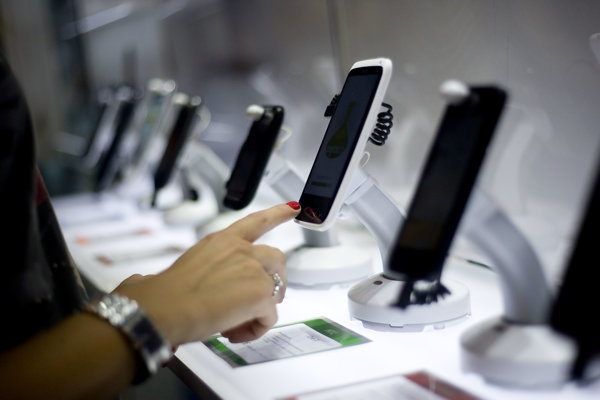 Since mid-June, holiday-makers and short-term travellers have enjoyed roaming with their mobile phones across Europe, free of extra charges. The new European Union regulation has also brought more calls as well as higher usage of data services in Slovakia. All Slovak operators report an increase in roaming operations. The highest were reported from Croatia, Austria, the Czech Republic and Germany.

Pavel Ďurík, PR manager at DanubiaTel, which owns the youngest telecommunication operator 4ka, also attributes the increase in demand for roaming services to the holiday season.

“In July, the amount of data transfer abroad more than doubled,” said Ďurík.

Since June 15, a new European Union regulation abolishing roaming fees for mobile services has been in place. The new rules mean that residents travelling in EU member countries including the United Kingdom, Norway, Iceland and Liechtenstein can call, text and browse the internet on mobile devices for the same rate they pay at home. But if exceeding agreed upon minutes, texts and data will still be charged, therefore mobile users should check the details of their plans with their providers.

“The main principle of the new regulation is the use of mobile services in the EU countries, Iceland, Liechtenstein and Norway at domestic prices, without additional fees,” said Roman Vavro, spokesperson of the Regulatory Office for Electronic Communication and Postal Services (RÚ).

The new rules on regulation did not abolish roaming, they just unified the prices for customers.

“The roaming fees for operators were not cancelled, which naturally generates additional costs,” said Alexandra Piskunová, spokesperson for Orange Slovensko.

Operators in Slovakia are closely monitored by the RÚ, which can impose fines for not complying with the EU regulation. However, the mobile phone companies can impose “fair use” policies that affect mainly mobile data.

“A mobile operator can set conditions of appropriate usage that would prevent the abuse or unorthodox use of roaming services,” said Vavro, pointing out that users should become familiar with these conditions in their own interest.

Roaming surcharges for 2017 are capped at €0.03 per min of voice call, €0.01 for an SMS and €7.7 / for 1 GB of data.
Some operators launched special products for travellers, offering price advantages.

Orange has not changed its product offer of Orange and its branded reseller FunFón.

“We experienced an increase in demand for roaming services and the related multiple increase of the roaming operation,” said Piskunová.

The Traveller package V Európe ako doma Plus (In Europe at home Plus) can be activated on all types of contracts for a monthly fee of €2.90.

“Clients with cheaper contract packages, with a home price of €0.10 per minute, will get a 40 percent discount for calls made in the EU, paying €0.06 for a minute,” explained Piskunová.

“Moreover, in selected countries they pay only €0.39 for a text message or 1 MB of data,” Piskunová added.

Clients who pay more than €30 a month for their contracts can also choose the Max Roaming package for an additional €2.45 a month, which provides limitless calls, texts and 2 GB of free data in the EU and Switzerland. After using up the data from the package, they pay €0.6 for 100 MB of data.

“The package also offers the discounted price of €0.39 for a minute of call, a text message or 1 MB of data in selected world countries,” added Piskunová.

Clients of 4ka used the highest amount of data in Germany, Croatia, Italy, Austria and the Czech Republic.

“Our customers pay 4 cents for a minute of call, a text message or 1 MB of data at home and also in the countries of the European Community,” said Ďurík.

For clients who want to use the internet abroad, Ďurík recommended the data package, EU Data, which provides 0.5 GB of data in any EU country for 15 days for €5.

“On average clients of 4ka use one or two packages for European roaming,” he said.

O2 has consequently cancelled the Diamond O2 contract, which was a variation for clients who needed European roaming on a regular basis. It became useless after the new regulation came into effect.

“For calls and data usage in Europe we can recommend all our programmes to our clients, since all of them respect the roaming regulation and the valid conditions,” said Tereza Molnár, spokesperson of O2 Slovakia.

Ondrej Macko, the editor-in-chief of the TouchIT.sk website, confirmed that so far, the European regulation is working well.
“However, it could be that some foreign operators are not ready for such a mass operation, mainly in terms of data transfer,” Macko told The Slovak Spectator.

“The speed can also be affected by the foreign operator, in the case of network overload,” Piskunová confirmed.

Speed of data transfer can decrease when the client runs out of the pre-paid data, Piskunová continued, stressing that this applies abroad but also at home. She recommends purchasing an additional roaming service that will keep the speed of the connection.

“We have to take into consideration that 500 million people in Europe can also use mobile data abroad,” said analyst at the Živé.sk website, Filip Maxa. It can affect the network capacity in the popular holiday countries and speeds can be lower.

“We expect that operators have already approached the most pressing problems with connection,” Maxa said.

Macko registered the low speed of data in Italy, adding that during his visit last year, it was faster.

“It is ideal if you can connect to a 4G/LTE network,” said Macko. Optimal speed for multimedia data is 20 Mbit/s and 10 Mbit/s for sending. “A speed of 10 Mbit/s is enough for watching YouTube videos.”

Maxa considers a speed 1 Mbit/s suitable for browsing the web or checking emails.

“For watching basic HD videos, downloading applications and following social networks, a speed of 4-5 Mbit/s is required,” said Maxa, pointing out that the stability of the speed is important mainly for watching videos. “Apart from that, it also depends on the responsiveness of the network, stability, used technology, the distance from the transmitter and the number of customers in the particular locality.”

TouchIT tested the availability and speed of connection in Croatia, where many Slovaks travel for their holidays. The customers of Orange and Telekom should not have any problems with connection in Croatia, the test found. The average speed of data was 12 Mbit/s for downloading and 8 Mbit/s for sending. However, the connectivity of the 4ka operator was very bad, TouchIT.sk reported.

Macko as well pointed out that many people fully enjoy the European regulation, which however does not cover the whole Europe.

Visitors to Monte Negro and Serbia reported high invoices from their operators, because in these countries the regulation does not apply. The main culprit was the usage of the mobile internet.

“On average, you can use about half of your pre-paid data in another EU country,” said Macko. Then your operator will send you a text message, informing you about the additional costs of data transfer. “You can stop data usage, purchase additional data or continue using the data at a much higher price.”