Evangelical priest would baptise Jews to save them from certain death. 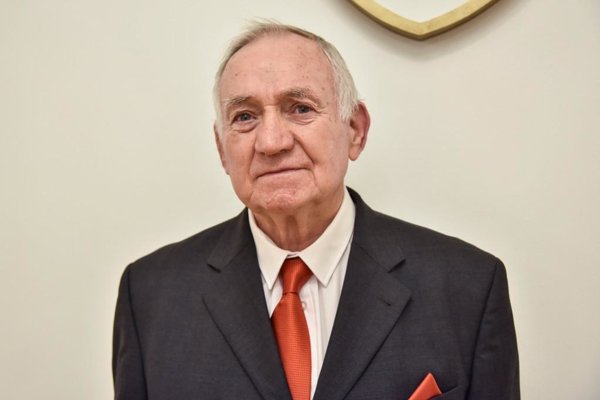 Juraj Holčík, an Evangelical Church priest in Banská Bystrica, baptised a large number of Jews of different ages, thus converting them to Christianity with the intention to save them from the dangers of persecution and deportation.

Records from the baptizing logbook of the Evangelical Church in Banská Bystrica contain personal details of the baptised people. In the original version there are names – probably fictitious – of their Evangelic godfathers. According to these records, in 1939 there were close to 200 Jews who were baptised, 111 of them by the priest Juraj Holčík; the priest Ján Bakoš baptised 13 Jews, and the priest Július Maďaraš baptised 53 Jews.

The first deportations started in 1942. Ján Bakoš took an active part in the uprising against the pro-Nazi regime in Slovakia; he was caught by the Germans and executed on 31 January 1945. In the records, the names of the baptised were written as follow: Vojtech Ján Partoš, born 1893, his wife Margita Partošová, maiden name Blumentálová, born in 1903, and their son Štefan Gejza Partoš, born in 1930.

Zvi Ginzberg writes in his letter that he heard of Juraj Holčík who served as a priest in the sole evangelic church in the city of Banská Bystrica. Between the years 1940-1942, he fictitiously baptised Jews residing in the town, in order to provide them with certificates proving they were Christians. He had to keep records of the people baptised by him, but when the Gestapo officers came to check the lists, he concealed the logbook and the Gestapo did not notice anything.

Zvi Ginzberg writes in his letter: “...from the year 1944 until the end of World War II, a Jewish family was hiding in the basement of Juraj Holčík´s house. The Partoš family, who owned a paint store in the city center. In 1946 the Partoš family left to Israel”.

Ladislav Mada (previous name: Teitelbaum), born in 1920, tells that after his service in the 6th battalion of the Slovak army (the vast majority of recruits were Jews; they were performing different support works for the Slovak army, such as digging trenches, laying railroad tracks, etc.), he arrived in the midst of the war and persecution of Jews to the city of Trnava (which is located around 160 km away from Banská Bystrica), where he was baptised by Juraj Holčík.

Marianna Bogdanová, maiden name Partošová, was born in 1923 in the city of Banská Bystrica. From her testimony from 1942-1945, it is revealed that March 1942 was a crucial month for the Jews (deportations of young Jewish girls to camps in Poland started). Marianna was hastily smuggled to Hungary, and although she later returned to Slovakia, she reunited with her parents only after the war was over. Her parents described the harsh conditions of their lives in the hiding place.

At a Slovak Evangelical Church conference held on 6 September 2014 in Banská Bystrica, the son of Juraj Holčík – Ján Holčík recalled:

“... I was eight years old. Many people that I didn’t know came in and out. Jews mostly, many of them came with their children. Their parents converted to Christianity. From 1938 until August 1944 my father, along with his colleagues Bakoš, Maďaraš and Samuel Velebný, had baptized more than 700 Jews... Thanks to this, many people were saved from deportations to concentration camps. At our place, several had been hiding from the Slovak police, and later from the Gestapo. A few of them stayed with us for over two weeks, dr. Jan Marták among them, whose original name was Markovič, and others. We were hiding in the chicken coop and in the cellar...”