These are the hoaxes that appeared on the internet in the past two weeks. 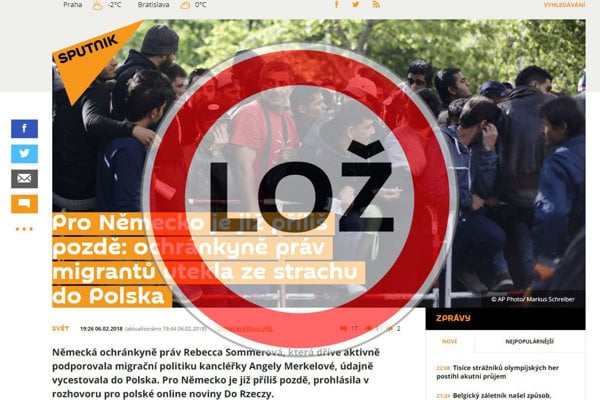 The wide-spread news on a German migrant activist fleeing to Poland is a hoax. (Source: Sputnik)
Font size:A-|A+3

In an interview for the Polish Do Rzeczy newspaper, she allegedly said that despite having helped the refugees in the past, now she does not feel safe around them, and fled to Poland.

The story was spread in several languages by Sputnik from where it was taken over by so-called "alternative" media like the Czech Vlastenecké Noviny, or the Facebook group AltRight.cz.

However, Sputnik later admitted that the information concerning the escape to Poland was untrue. The Czech website Manipulatori.cz, which uncovers false information on the internet, noticed it, too. Rebecca Sommer declared she did not leave Germany, and does not plan to do so.

How did media face the truth

She has been critical, however, of the free immigration policy which does not differentiate between people running for their lives and people who throw away ID cards and documents to lie about their age only to be allowed to stay in Germany.

The German language version of Sputnik later published a correction. But the Czech Sputnik only re-wrote the story, without any apology or clear correction. Its original version can still be found through the Webarchive.org service. Many other websites and Facebook communities continue to spread the lie, however – the lie from which the activist distanced herself.

Sophie Johansson, a nineteen year-old from Sweden, was brutally attacked in a Malmö night club after she defended herself against sexual harassment. 40 percent of the city’s population are immigrants.

The story published on the last day of January on the Czech disinformation website AC24.cz is a good example of how so-called alternative media distort true information.