Demonstrating peacefully, ringing their keys, Slovaks today are fighting for their past, their present, and their future. 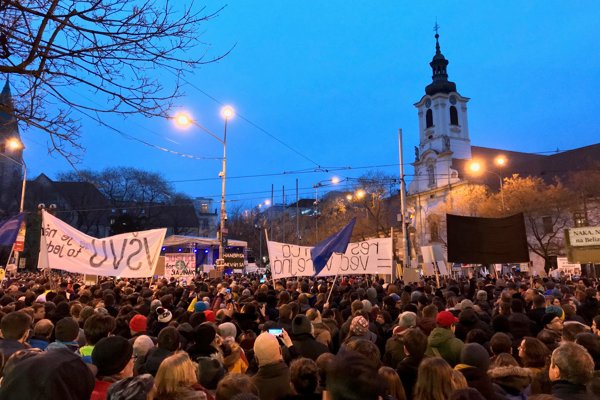 For a moment, Slovakia was front-page news all around the world when international media reported on the murder of the young Slovak journalist, Ján Kuciak, and his fiancée, Martina Kušnírová, as a result of his work on the corruption, outside infiltration and abuse of political power in Slovakia.

I quickly came to realize that with everything that is going on right now, the representation of Slovakia abroad would not get any better. Unfortunately, Slovakia still has its Eastern Bloc history against itself, with many people still assuming Slovakia (government and people alike) is much akin to Russia – a democratic pretender.

We know this is primarily a result of simply being uninformed about Slovakia. I fear, however, that the very factual description by international media of the murder of Kuciak, the corruption, and the ties between the government and foreign organized crime, only confirm this distorted stereotypical image in the eyes of their readers, instead of changing it.

Foreign readers need to be shown the very strong emotional undertow underneath the recent events and the reactions to it – one that runs deep in the psyche of the Slovak people.

First of all, Kuciak’s murder should be seen as the "last drop" in an already long stream of suspicions of political corruption over the past years.

Second, even deeper, the majority of Slovaks gathered in the squares and in front of embassies all around the world, still have a vivid recollection of the infamous 1990s era of Vladimír Mečiar, where the streets ran rife with corruption, violence, murder by broad daylight, abduction, and oppression of free speech. When Mečiar's autocratic rule as prime minister ended in late 1998, the Slovak nation hoped to never have to go back to a time like this and to march forward into a better (and safer) future. To many, the murder of Kuciak is a stark reminder of a Slovakia 20 years ago. A Slovakia they prefer to leave behind.

Moving even further back in time, we should see today's demonstrations against the backdrop of the final days of the Communist era in the late 1980s, when the parents of today's generation cried out for change. They organized their own peaceful demonstrations against the Communist regime and brought it to its knees. They rang their keys. They called for a better future for their children. They succeeded.

Standing up against corruption in 2018 is therefore more than a reaction to recent events. It is a new generation protecting what their parents fought so hard for 30 years ago. What's more, it is a new generation fighting in its own right for the future of their children.

The distinction between Slovakia as a government and Slovakia as a people is therefore very important. Demonstrating peacefully, ringing their keys, and crying out for change, Slovaks today are fighting for their past, their present, and their future. The world should see that.