Architect Matúš Vallo, with dozens of other experts, wrote the Plan Bratislava book. He will run for mayor. 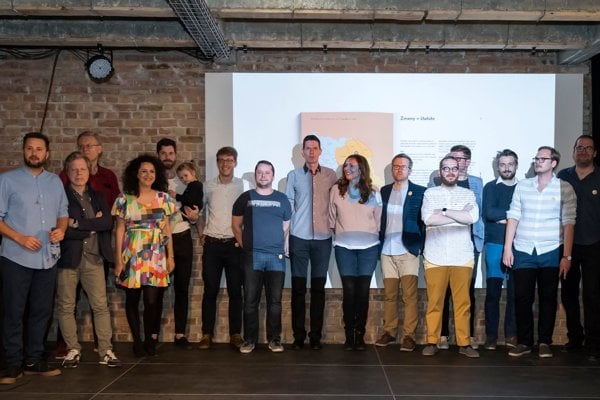 Matúč Vallo, left, with some experts who worked on teh book with him. (Source: René Miko)
Font size:A-|A+16

“Bratislava has a totally unbelievable position,” said Matúš Vallo, 40, architect and candidate for the Bratislava mayor. “It is located at the foothills of the Small Carpathians mountains, we have the Danube and not far from us there are huge metropolises like Budapest, Vienna and Prague. It has an interesting history and has great inhabitants who love this city and are willing to do something about it.”

He opines that Bratislava is far from making enough use of its potential and like other cities has problems. And he believes that the problems can be solved and that Bratislava can become a fully-fledged modern European city. That is why he partnered 76 experts and composed the Plan Bratislava book with them. It contains a manual for making Bratislava a better city.

The book was published by the Slovart publishing house and was launched on April 19 by actress Zuzana Fialová in Bratislava.

It started with Urban Interventions

“Neither me nor anyone who worked on the book is a man who just grumbles,” said Vallo. “We have realised, also thanks to work on Urban Interventions, that coming up with concrete solutions is much more interesting than just criticising something.”

Vallo initiated the Urban Interventions - Ideas For Better City project in Bratislava in 2008. They called on other architects and activists to come up with tangible solutions to improve the public space. Later they extended this initiative to another 19 towns in Slovakia and the Czech Republic. So far teams and individuals have created over 900 projects to improve public spaces within this initiative.

“Urban Interventions was a warmup and the book is the culmination of our efforts to improve the city from outside - from an activist’s environment,” said Vallo, who himself is a Bratislava native.

The book is the programme with which Vallo and his team want to run for the Bratislava mayor’s post.

Other possible candidates include former director of public broadcaster RTVS Václav Mika, mayor of Bratislava's Vajnory Ján Mrva, mayor of Bratislava's Záhorská Bystrica Jozef Krúpa or politicians Ján Budaj or former Bratislava mayor Milan Ftáčnik. Incumbent mayor Ivo Nesrovnal has not said yet whether he will run for the post again. The election will take place in the autumn.

The book is divided into two basic parts - Functional City and City’s Agenda. The first part discusses how the city’s functional management should look. The second part focuses on key themes related to the life in the city such as mobility and the environment, as well as sports and culture and the creative industry.

“You do not have to read it from start to finish at once,” said Vallo, adding that readers can freely choose from individual chapters conceived as separate parts. “It does not have a plot nor a big happy end.”

The group of almost 80 experts worked on the book for free for almost two years.

“Maybe they joined because they had a similar experience with the citylike me - when trying to help improve or change things they were confronted with statements like it is not possible, we do not have powers for this or get used to it,” said Vallo.

Because of the complexity of the Bratislava issue, the experts worked in 12 working groups on 12 basic topics.

For example, Táňa Kratochvílová, as a traffic engineer, contributed to the chapter on mobility. Fedor Blaščák and Michal Hvorecký worked on the chapter on the identity of Bratislava and the people living in it. Zora Jaurová, who was involved in shaping the European Capital of Culture project in Košice, led the working group on the culture chapter. Matúš Čupka, co-founder of the Green Patrol initiative, worked on the chapter concerning the city’s development. Dana Kleinert, fashion designer and director of the Slovak Fashion Council, participated in the chapter on education.

“I was born in Bratislava and I have seen for a long time that Bratislava is not on the right track; that it lacks vision and that there are great shortcomings,” said Ctibor Košťál, the head of the chapter on city administration. He welcomed Vallo’s initiative of combining the solution of partial problems of the city into one whole.

A major novelty, compared to how the city functions today, is the plan to set up a brand new body - the Metropolitan Institute of Bratislava.

“It is one of the basic improvements proposed,” Vallo said.

In his opinion the current body of the chief architect and the City Planning Strategy Department do not have enough support from the city’s management. This reduces their ability to respond to what is happening in relation to the city.

The Metropolitan Institute is to become the tool of a self-confident city, for example, in relation with developers who, as Vallo says, very resolutely and often interfere too much with how the city will look.

“Today it is the developers who dictate where Bratislava is going,” said Vallo. “It should be the opposite. It is the city that should set its course and limits for all those doing business on its territory.”

The Metropolitan Institute is the place where strategic thinking about the city and its development is to be concentrated. It must hold an adequate position so that professional outputs are sufficiently binding for all stakeholders, while retaining a certain degree of independence.

For the launch of the institute Vallo and other experts took inspiration from foreign countries where such institutes work, for example, in the form of departments of chief architect or a mayor’s counsellor.

“We like the Prague model, which has been working very well already for some years,” Vallo said.

It is impossible without money

At present, Bratislava is financially undernourished, claim the book’s authors. It even does not receive compensation from the state due to the government, parliament, and the state administration being located here. As a result, its revenues are not high enough to secure services the city provides to the whole country.

One possibility to improve the situation is to make Bratislava a better manager. For example, it can secure the maintenance of its roads on its own and not via a private company. The book’s authors also see space for savings in public lighting and the reorganisation of the city’s companies.

The city should also not be afraid to raise local real estate taxes that are low compared to real estate prices. However, such an increase should be conditioned by carrying concrete and substantiated projects that will be implemented for these taxes.

No more road lane or parking lots will help

Their solution to the current poor transport situation in Bratislava is not the addition of road lanes or parking places or billions of euros invested in bypasses and highways, but in a new urban mobility logic. They propose to promote walking and cycling as well as improve the quality and efficiency of urban public transport.

Free on the internet

The Plan Bratislava book is available in bookstores and its expanded 500-page version is free of charge at www.planbratislava.sk.

“The mobility working group has 'forced' me to publish the book under the Creative Commons license, which means that the text is completely available to anyone on the web,” Vallo said with smile during the launch of the book.

This means that any text may be taken, edited, distributed, published under a different title, provided that the credits are given to the Plan Bratislava book.

“The aim of this book is to make Bratislava a better city. And it does not matter whether it will be me or somebody else,” said Vallo. “The main thing is that this information spreads and reaches the right people.”