The city council wants those who live in the capital without permanent residence to contribute more financially to the city. 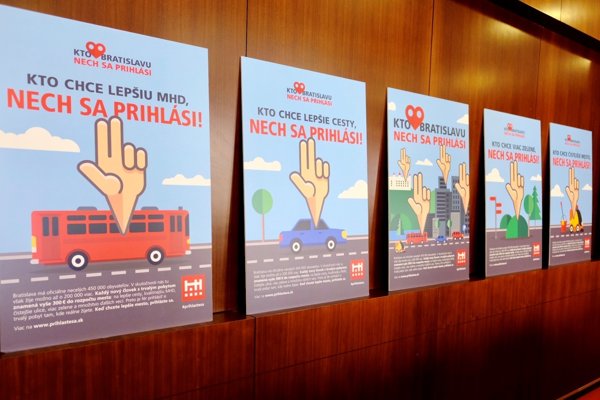 Bratislava's city council is calling on people from other parts of Slovakia who live and work in Bratislava to register their permanent residence here. The council wants to increase its revenues as the state allocates money to municipalities based on the official number of citizens.

“It is unfair [to live here without permanent residence] to Bratislavans as well as the city, which lacks money for roads and other needs,” said Bratislava Mayor Ivo Nesrovnal. “When somebody lives somewhere, he or she should participate in the costs.”

The city council launched the campaign Prihláste sa (Register!) on May 3. It will last until the next census scheduled for 2021.

Bratislava has been underfinanced for a long time. Nesrovnal ascribes this to a badly prepared and communicated census in 2011 when a lot of Bratislavans did not attend. He estimated that this ‘cost’ the city about 70,000 citizens or about €10 million annually. Nesrovnal hopes that the next census will bring a more realistic picture and better financing to the Slovak capital.

Registering permanent residence in Bratislava has several advantages, including a residential parking card, easier placements for children in kindergarten and elementary schools and better access to medical, daycare and other services. Bratislavans can also enjoy various advantages with the Bratislava card like discounts with public transport or cheaper entrance to the zoo or swimming pools.

With this campaign, the city council wants to call on owners of residential real estate in Bratislava to enable their tenants to register for permanent residence as this brings them neither duties nor entitlements on the side of the tenants.

Those who wish to register permanent residence must go to the council of the Bratislava borough in which they live. They need to submit a valid ID card, an extract from the property deed and if they have children up to 18 years of age, the original of their birth certificate. New ID cards are not issued by these offices, but by the district police headquarters.