The conference will no longer be just a platform for exchanging opinions. 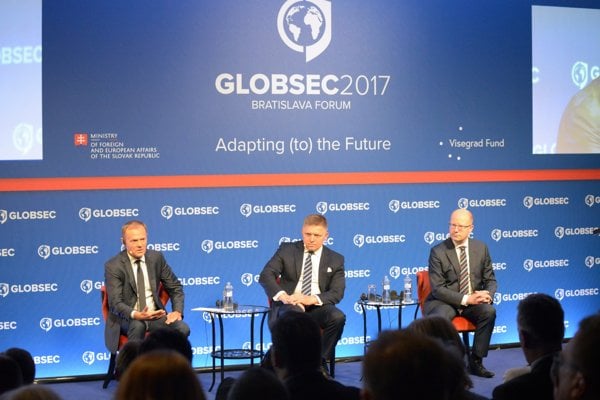 The upcoming annual Globsec security forum, due to take place in Bratislava between May 17 and 19, will differ from previous ones by providing more of its “own content”.

“The conference will no longer be a mere platform for exchanging opinions; we’re also bringing our own views as well as our recommendations for several issues to be discussed,” said Globsec president Róbert Vass, adding that more than eight essential reports will be presented.

For the first time, Globsec is publishing one of these reports called ‘Megatrends 2018’ as early as one week ahead of the event. Another new element is a wider diversification of issues to be discussed at the conference.

“We’ve strengthened those issues that are technological and have a secondary influence on politics rather than those that are primarily political,” said Vass, pointing to the need to address issues that will influence the world in the near future.

The organisers of the 13th security forum in Bratislava expect 140 people from various sectors to address the Globsec participants, the highest figure in its history so far. Three parallel programmes are scheduled to take place in separate halls, as well as over 40 accompanying events in cooperation with international partners, including global think tanks. A total of 1,000 guests from 60-70 countries are expected to attend Globsec 2018.

Among the prominent speakers will be Slovak Prime Minister Peter Pellegrini, Czech Prime Minister Andrej Babiš, the foreign affairs ministers of the V4 countries (Visegrad Four group - Poland, Hungary, the Czech Republic and Slovakia) and other members of foreign governments. Vass views the premiere attendance of the Global Commission on the Stability of Cyberspace (GCSC) as a “big success”, as it is the most significant global authority of its kind.