Politicians only pretend to solve citizens’ problems and I cannot do this, outgoing Czech Foreign Minister Martin Stropnický tells Sme. 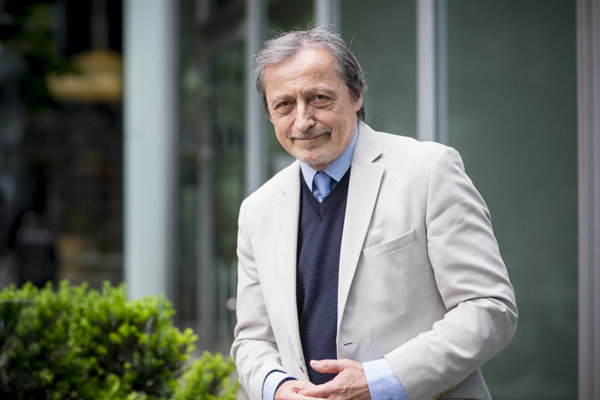 He rose to fame as an actor, director and writer. After the Velvet Revolution of 1989, he worked for 12 years as diplomat, was ambassador to Portugal, Italy and the Vatican. For a short time, he was also a culture minister. He returned to politics with Andrej Babiš, during his ANO movement. In the cabinet of Bohuslav Sobotka, he was defence minister and in the first Babiš’ cabinet – now abdicated – he leads the Foreign Ministry. He announced he will not be part of the next government while rumours persist that he will become Czech ambassador to Israel. He visited Bratislava during the GLOBSEC 2018 conference.

Sme: In an interview for the Czech paper Lidové Noviny, you said you are leaving active politics as you don’t want to be part of the spoil-world. What do you mean by this?

Martin Stropnický (MS): This is, unfortunately, a characteristic of some politicians who pretend to be here, to solve citizens’ problems, are masters in playing the game of seeking solutions but in fact spend most of their capacity on just keeping their position. If you want to solve anything, and you face these types of politicians – shadows, it is frustrating, to say the least.

Sme: Political debates or political games are part of parliamentary democracy. Don’t you mention exactly those?

MS: I don’t think so. In parliament, there can be tough and even conflicting debates but the result should be the solution which combines the arguments tabled so far. If I present something as a draft amendment, an opponent comes and says something can be improved, then gradually, a pyramid is created and on its top, a truly better result can arise. This is the sense of democratic debate; not a situation when one deputy offers something, while another deputy does everything to spoil it, even though they know it was created as a good thing.

Sme: In Slovakia, fascists proposed a de facto ban on abortions and some conservatives want to vote for it, as they agree with the core of the draft bill. Others say that you should not vote with fascists. Is this second stance the “spoil-world” you mention? Would you vote for proposals of extremist Tomio Okamura?

MS: One cannot rule out that extremists come with a draft that is not populist, calculated, but on the contrary, a needed one. An MP should always consider whether it brings something positive for citizens. If yes, then they should vote for it, even though they have a problem with the party that files it. But I don’t mean the [Okamura] proposal; this is probably the most extreme example.

Sme: Would you vote for Okamura’s proposal even knowing that you are thus legitimising it and maybe helping him in his next campaign?

MS: We should speak then about a specific proposal. If this concerns flirting with the idea of leaving the European Union then it is not worth discussing it. By the way, the support for the EU in the Czech Republic returned again to more than 50 percent in recent months which I consider a sign of rational thinking of our population. This is proof that people are fed up with arguments about how the EU harms us.

Sme: Your party, ANO, wants to create a cabinet with communists who repeated these arguments. Why is it a good idea?

MS: “Want to create cabinet” is slightly inaccurate. ANO is in a situation when it “suffered” a 30-percent victory, and other parties had so many conditions that would be impossible to meet without having a Plan B.

It is not that ANO would not negotiate but in the end, very few possibilities were left.

The current option – i.e. cabinet with Social Democrats and support of communists – definitely is not an option that would make many in ANO cheer happily but it is the “art of currently possible” and awareness that responsibility for creating cabinet lies with us. People rightly lose patience and the thing has to be concluded.

Sme: Had ANO not insisted on making criminally prosecuted Andrej Babiš prime minister, there would suddenly be more options. Why is the PM’s chair for Babiš more important than the threat that 29 years since the Velvet Revolution, communists will come to power?

MS: “Come to power” is too strong of an expression; I would rather say they will have a certain influence. On a local level, communists have been in coalitions for years, and nobody minds this. They already have quite a big influence in everyday life. I understand that you can see it more clearly on a national level.

Sme: This could be avoided if Babiš gave in and someone else becomes prime minister.

MS: The ODS said, for example, that ANO is a no-go. Many parties stretched their muscles while ridding themselves of negotiating chances. When a movement goes to election with a clearly defined leader, all doubts about him are known in advance, the movement wins and the leader has by far the most preferential votes, why would we change him? In such a situation, voters could blame us because they voted for us due to this leader, and it could be considered a betrayal of voters.

Sme: This could be true if ANO got a majority but ANO does not have majority, and it must negotiate on support with other parties.

MS: Thirty percent does not mean a majority but is not a small group of people who wanted it like this. We cannot say that Ronaldo will not play, and set him on the penalty box – such a demand makes no sense. I am among those who respect presumption of innocence, also in politics.

Sme: So you don’t understand the argument that the Czech Republic should not be led by a PM prosecuted for fraud in drawing EU-subsidies? Do such doubts not cast bad light on the whole country during his visits to Brussels? European investigators supported the suspicions, too.