Ilona Németh’s exhibition on the sugar industry in Slovakia reminds us that we lost a crucial battle. 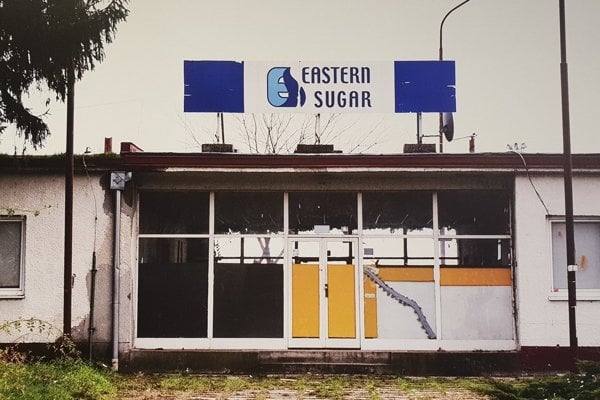 Homoľa – or a loaf, in English – is the name for the sweet white cone, the form in which sugar once used to be distributed among consumers. If you stop by in the Kunsthalle (Art Hall) in Bratislava soon, you can have one too.

Despite the bad rep sugar now gets, the message of the vast exhibition called Eastern Sugar is important. In it, visual artist Ilona Németh connects the sugar industry to several fundamental layers of life in our modern society, from progressive ideas to jobs to backstabbing.

From the rich history and global importance of the sugar industry on Slovak territory to the miserable fate of Slovak sugar factories at the break of the millennium, she got to the issue of how the culture of business and economic earthquakes in society are related to the issue of nationalism.

For Zuzka Bányászová, now already deceased, it was impossible to get sugar where she lived in the Lower Land, i.e. the historically southern part of Great Hungary where ethnic Slovaks have lived outside their home territory. Each single lump they could get was a special treat and highly appreciated.

Her young son did not know sugar until their family relocated – following the Beneš decrees – to one of the villages in southern Slovakia in 1947, when he tasted sugar for the first time. (Beneš decrees were a series of laws of the Czechoslovak government-in-exile in the absence of the Czechoslovak parliament during the German occupation of Czechoslovakia in World War II, dealing with many aspects of peace-time life. In journalism and political history, these refer mostly to the decrees concerning the status of ethnic Germans, Hungarians and others in postwar Czechoslovakia which represented Czechoslovakia's legal framework for the expulsion of Germans from the country, ed. note.)

“Suddenly, we got so much sugar per one person that we had plenty of it; we had never experienced anything like that before,” she said a few years ago in an interview for Sme.

By that time, sugar factories on Slovak territory had long been famous worldwide. In Upper Hungary, they had already started to mushroom in the second half of the 19 th century. The first ones appeared in Sereď, Šurany and Trnava, and spread from there. The industry expanded considerably also thanks to successful experiments with cultivating sugar beets and the refining process.

The sweet children of revolution

Starting in the 19th century, sugar production became one of the most important industries in the Austro-Hungarian Empire. Fueled by orders from Emperor Franz Joseph I. of Austria, those owning sugar production became wealthy. Several sugar tycoons from the now Slovak territory invested huge property into regional development, getting the title “sugar barons” for the production of a commodity called “white gold”.

As know-how gradually started to be exported abroad, sugar plants similar to the Slovak ones were built elsewhere, including in several Asian countries. Still, after World War II ten sugar factories operated on the territory of Slovakia.

Currently, only two of them are in operation; the death of the remaining ones came after 1989 when the reform of the sugar industry arrived. The former “white halls” became “black holes”.

Sweet mirror of the post-revolutionary Slovakia

One of the perished sugar factories is one in Dunajská Streda. Originally called Juhocukor (South-sugar), it was established in 1970 and was among the biggest in the country. After the arrival of majority foreign shareholders in 1993, it was re-named Eastern Sugar and was promised investment, revitalisation, international involvement and an overall boom of sugar production in Slovakia.

However, the plant only lasted until 2007; after it was privatised, its fate was clear.

Ilona Németh was irritated by the demise of the factory as a citizen and also as an artist. The towns on Žitný Ostrov (Rye Island) in southern Slovakia, including her hometown, were palpably impacted by the loss of the plant. Moreover, the fall of the factory reflected the bleak approach of power in the whole country.

“I have always been annoyed that not only the dominant structure disappeared from the town silhouette, but also from the industry map of Žitný Ostrov. It ceased to exist despite us all knowing that it was a modern, functional sugar factory,” she said about the Dunajská Streda plant.

Initially, she only knew funny stories about how it was levelled to the ground but later, these legends were tainted with the bitter taste of Slovak business reality: the factory was closed due to a one-time compensation.

The company that bought the sugar factory and signed contracts, got €753 for each ton of sugar not produced, with the approval of the Slovak government and the European Union. Then, the EU was pressured by China and India to reduce sugar production and it introduced quotas and paid factories for sugar not produced, in exchange for pledge never to re-open again. When the quotas on sugar production were lifted in October 2017, mere two - instead of ten - factories remained in Slovakia.

Of course, none of this money remained in the region. This makes only more lamentable the fact that decisions resulted from bilateral agreements between state and private businesses.

In the interactive installation located a huge production hall in Kunsthalle, visitors can make a loaf of sugar on their own, assisted by those registered as unemployed at the Labour Office. They are live references to the consequences of ending an enterprising culture.

What is private, is “natio”

In her work, Ms. Németh has already previously focused on various forms of nationalism; its wave has resonated in her for years. She asserts that nationalism is a product of frustration caused by scrapping production, loss of jobs, and giving up the structure of responsible enterprising.

“Slovak-Hungarian relations were very turbulent around 2010,” the artists recalled. “In both parliament and media, the impossibility of coexistence was mentioned all the time, and Hungarians were the enemies.”

For years, she tried to understand the reasons for growing nationalism and extremism, despite the theoretically improvement in life conditions.

Though she was invited to do a solo exhibition at the Bratislava City Gallery, the atmosphere was so unbearable for her that she chose to rather cooperate on a joint exhibition on nationalism with artists Martin Piaček and János Sugár.

Shortly afterwards, she was invited as curator to the international project Private Nationalism. Her seven-year efforts culminated in two international exhibitions Universal Hospitality, shown in Vienna and in Prague.

In her new project Eastern Sugar, she perceives the sugar industry in Slovakia as one way that people can identify with their region, and which can even make them feel responsible towards it.

“When an employer with a long tradition disappears from the locality, this empty space can be filled with ideology,” the author of the project opined. “Nationalism, extremism and populism start to address the most vulnerable points of society, and re-focus its dissatisfaction and energy in another direction: the direction which better suits those in power. We can see this now very strongly in Hungary.”

However she looks at the problem, she cannot oversee the lost opportunities behind it. “Not to mention the lost culture of enterprising and culture of innovative ideas as such,” she added.

She has split the sugar exhibition into several parallel blocks, together with curator Nina Vrbanová. In the big production hall, the central part of the venue, she interactively involves not only visitors but also the unemployed from the Labour Office who assist them in hand sugar production. 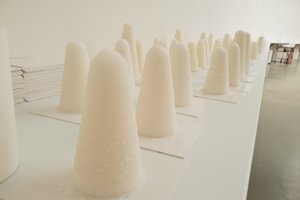 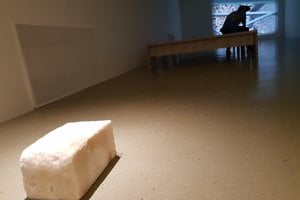 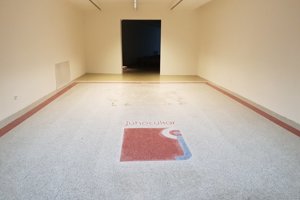 To make a sugar loaf in Kunsthalle, you need a bowl, sugar, sweet molasses, and a conic formed mould. After drying, you can chop pieces of sweetener from it – as our ancestors did until lump sugar was invented in the Czech town of Dačice 1841.

She also works with large-format photographs by Olja Triaška Štefanovič. Through them, she asks why we let our sugar plants dilapidate, pointing to their architectural value and top-of-the-world level interiors.

She offers authentic statements of sugar factory owners abroad whom she also talked to.

In one part of the space, a pilot version of the non-existent Museum of Sugar has been installed. The artist established it in cooperation with the Town Museum in Šurany, which specialises its exceptional collection in the history of sugar production in Slovakia.

“A museum is excellent, for sure; but if you need to found one, this means that something is dead here,” Ilona Németh opined. She makes present and palpable a whole branch of industry that has vanished from the map of Slovak industry. The need to establish a museum of sugar-production industry, not a single sugar plant, means we have already lost the fight.