Even former cycling legend and sports commentator Jan Svorada was shocked by the breakaway which secured Sagan's sixth victory in the Slovak championship. 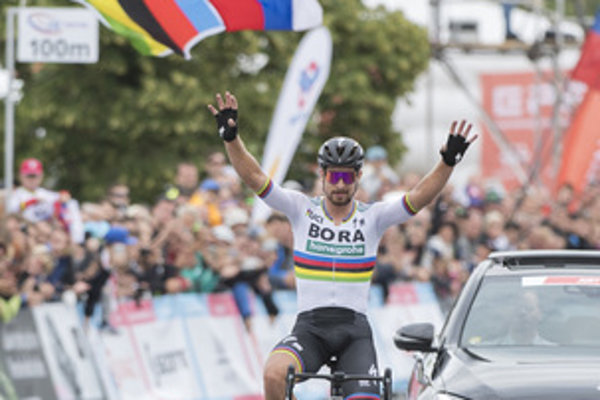 The biggest star of the joint championship of the Czech and Slovak Republics in the city of Pilsen, Peter Sagan – a of three-time world champion – shocked his rivals, the audience and experts alike when he started a sudden breakaway as far as 80 kilometres from the finish, the Sme daily wrote on June 24.

This was an unusual move for Sagan and even the legend of Czechoslovak cycling and current sports commentator, Jan Svorada, reacted with surprise during the live broadcast from the event.

His excellent performance ended with a clear victory, marking the 106th victory for Peter Sagan and his sixth Slovak champion’s title.

“I don’t know why I did it but I am happy that it worked out – it is not possible to plan something like this,” Sagan said after the race, as quoted by Sme. He also thanked visitors and fans for their loud support that even included drumming.

The champion…. And the others

The incumbent Slovak champion, his brother Juraj Sagan, came second, with the third best Slovak becoming another Bora-Hansgrohe cyclist, Michael Kolář who shocked everyone after the race with his announcement of the end of his five year – career.

Czech cyclist Roman Kreuziger resigned from the race, citing not just fatigue but also the way in which the Elkov team riders, who dominated the Czech classification, were riding.

“They want to be leading in the biggest possible numbers but refuse to pull the peloton,” he explained for Czech TV.

The Czech champion is Josef Černý, while Jan Bárta was second and Jakub Otruba – who won the Under 23's race – was third.

The best Slovak “under 23” is Matúš Stoček of the Petroli Firenze team, Sme wrote.