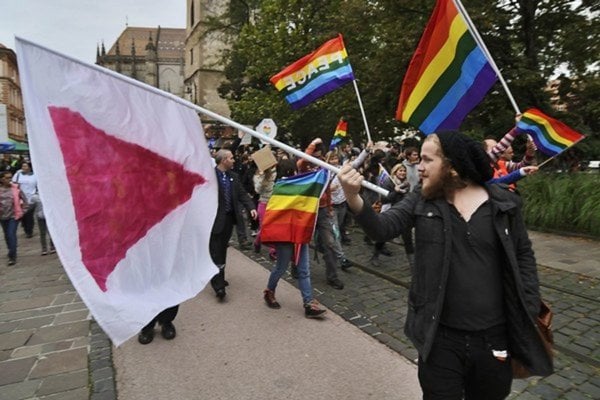 Rainbow flags irritate some Slovak politicians but the ombudswoman will hang one from her office, nevertheless. (Source: SITA)
Font size:A-|A+21

Seven years ago, he was the first politician in Slovakia to publicly admit he is homosexual. Stanislav Fořt who was an MP for the Freedom and Solidarity (SaS) party in 2011 did not encounter criticism from his parliamentary colleagues at that time – the attacks did not come, even from the conservative politicians in the Christian-Democratic Movement (KDH).

He faced a dilemma before his public “coming out”. “There was not only myself to consider but also my parents, my partner, and other people close to me,” Fořt says after all those years.

With his confession, he wanted to send a signal to the families of people with an homosexual orientation and also to those who went to live abroad, that Slovakia is not a lost case.

Since then, the conditions for homosexual partnerships have not improved and in recent years, they have been faced with strong attacks from the coalition Slovak National Party (SNS) and the extremist ĽSNS.

Fořt admits that a similar step would be harder today. “It would be all the more demanding on my parents and partner but all the more urgent, too, because of the people who need encouragement,” he says.

The SNS, which blocked the legislative efforts of Justice Minister Lucia Žitňanská of the coalition Most-Híd party to improve the life of homosexual couples, is also against the Pride marches for the rights of gays and lesbians. More recently, the party has started attacking the Ombudswoman for Human Rights, Mária Patakyová (a Most-Híd nominee).

SNS MP Anton Hrnko called on her not to support the parade, due to take place on July 14 in Bratislava, as he believes that the LGBTI community threatens the traditional family. In a press release addressing the ombudswoman, Hrnko reminded her that she was chosen for the position on the back of SNS votes.

To say that homosexuals and family is wrong is contradictory, according to Fořt, as they complement one another.

“To call on the ombudswoman to abstain from pointing to a deficit of human rights is against elementary logic,” the former MP, Fořt, opines. He does not plan to return to politics. As for the statements made by Hrnko and the SNS, he perceives them as a cheap way to draw attention.

The ex-MP has participated in several Pride marches in Bratislava. Fořt also points out that these parades are regularly organised in Dublin – the capital of the firmly Catholic Ireland.

Patakyová reasons that participation in this year’s Pride shows, among other things, that the issue of human rights for LGBTI people has not changed since last year. Through her spokesperson Michaela Pavelková, she stated that she would support the parade again, symbolically, by hanging a rainbow flag from her building’s window.