The reigning world champion Peter Sagan has won the yellow jersey and takes the lead in the green-jersey points’ classification competition. 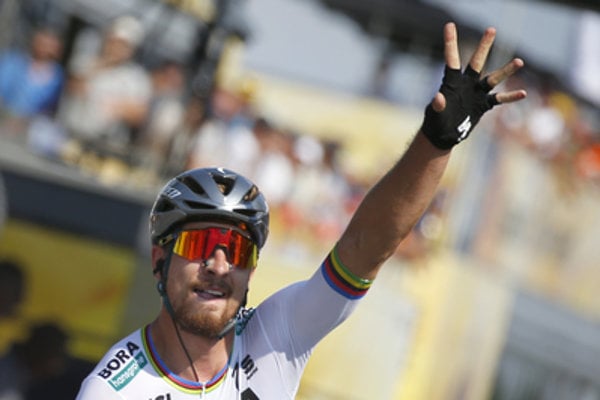 Slovak cycling star and the current world champion, Peter Sagan, won the second stage of the 105th Tour de France following a sprint in the final section on July 8 and donned the overall leader’s yellow jersey, as well as taking the lead in the green-jersey points classification competition.

The world champion profited from a mass crash that also involved the winner of stage one, Colombian Fernando Gaviria and another favourite Michael Matthews, some two kilometres before the finish.

The 28-year old Slovak cyclist notched up his sixth stage victory this year and placed 107th overall on Sunday. He also wore the yellow jersey in three stages at the Tour de France two years ago.

“I’ll probably only be wearing the yellow jersey for one day but I’m happy for that,” commented Sagan, as quoted by the TASR newswire. “I have a lot of friends from Žilina here today and my father is here as well. It’s a beautiful victory, which I dedicate to my son Marlon,” he added.

The Slovak cyclist has a six-second lead ahead of Gaviria and is another four seconds ahead of Colbrelli in the general classification. In the green-jersey classification, Sagan is also on top, 26 points ahead of the Colombian.

A 35-kilometre-long team time trial is scheduled at TdF for Monday.

The new score sheet appeared almost five hours after the end of the stage, the SITA newswire wrote, citing the specialised website Cyclingnews and adding that the falls and mechanical problems caused chaos and the ultimate change to the results. Through the jury’s decision, in the final version as many as 116 riders had the same time as the leg winner, Peter Sagan (4:06:37 hour) i.e.all those who were in the peloton at the time of the crash. According to SITA, the jury cited Rule No 2.6.027 as the basis for its decision, the press release of the international cycling union, the UCI, reads.