If Slovak celebrities raised their voices, we could help the dying director

Slovak director Kirchhoff commented on Slovakia’s stance towards a political prisoner in Russia, whose story will be shown on film in Bratislava. 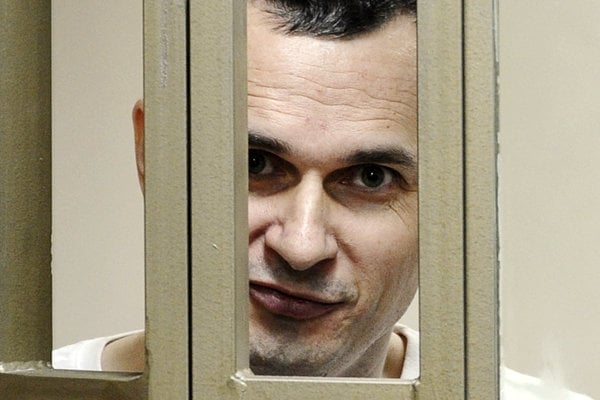 The Russian Federal Security Service arrived at his home, beat him, put a sack on his head so he couldn't breathe and thus fainted, took off his trousers and underwear, threatened him with rape and demanded a confession.

Ukrainian director Oleg Sencov took to the streets four years ago to join protests against the Russian annexation of Crimea. He brought food to Ukrainian soldiers and helped organise a protest convoy of cars.

Russia saw criminal offence in his actions, however. They accused Sencov of having organised terrorist attacks on railway bridges, demolishing electric wiring and of planning to destroy a statue of Lenin. They claimed he was a member of the Right Spectre, an extremist group of Ukrainian nationalists and neo-Nazis.

Not even pressure from the biggest filmmakers worldwide helped; the Ukrainian director, who after the annexation is now a Russian citizen, ended up in prison. Sentenced to twenty years, he is now on a hunger strike in Siberian exile.

He is in critical condition.

“If he had died, we may not even have learned about it,” Slovak director Robert Kirchhoff said. “The football championship is taking place and the Russian cabinet would surely try to brush it under the carpet.”

Despite fears to the contrary, Oleg Sencov is still alive, Kirchhoff just learned from the director's sister. Most of his organs are not fully functioning anymore, however.

Kirchhoff is a member of the European Film Academy, which has been calling on global politicians and diplomats to help Sencov and get him released since 2015. In May, with another group of Slovak signatories, he wrote a letter to Slovak Foreign Minister Miroslav Lajčák but without receiving an answer.

“His silence is the reflection of the foreign policy of Slovakia and its direction: our diplomacy behaves cautiously or even timidly towards Russia,” said Kirchhoff.

The Ukrainian director was born in 1976. He graduated from the Economic University in Kiev. His breakthrough came with the film Gamer –the story of a boy who spends his days playing computer games - and it was successfully screened at the Rotterdam festival. He supported the Maidan protest.

His engagement against the annexation of Crimea was called a terrorist crime by Russia. He was charged with two assassination attempts targeted at government bodies, and with planning the destruction of Lenin’s statue.

He was sentenced to 20 years in prison; in 2015, the Supreme Court in Moscow confirmed the sentence. He was transferred to Yakutsk where he started a hunger protest.

“We have our own historical experience in this. We should show our limits more clearly towards the authoritarian regime in Russia; we should make Putin feel we don’t agree with Crimea’s annexation, that we protest against the murder of journalists and opposition politicians. Our colleague was kidnapped from his own country, accused of terrorism and in a manipulated trial given a long prison sentence – we cannot stay indifferent.”

What ideal can connect us?

"In the past few days, I have been thinking a lot about why Oleg Sencov failed to stir western Europe, and why so few people have showed interest in his critical situation. When I wrote a letter to minister Lajčák, I asked myself what could connect us. In which personalities can we meet, on which ideals can we agree?” Kirchhoff asked.

He also pondered how things might look differently if popular personalities in Slovakia used their voice. “It seems that this nation lacks moral models. I respect, for example, Peter Sagan, but couldn’t he do a bit more? Maybe if he, or our hockey players, or Adela Vinczeová stepped out of their non-opinionated state, and left for a while the world of show business, maybe something would change not only here but also in the case of Oleg Sencov."

Robert Kirchhoff is convinced of the Ukrainian director's innocence and was interested in the details of his trial at a military court in Russia. The vice-chair of the board of the European Film Academy, Mike Downey, told Sme that the Ukrainian's lawyers were not able to get to the contents of the charge.

“Luckily enough, I have not been through his experience, and I don’t dare to say what exactly is happening in his mind. He opted for suicide, it means he has given up on his existence. Life is the greatest value. Thus, he has given up on everything.”

Two witnesses who helped convict him later said they had testified against him under pressure. One of them was later released from the Russian army, as he suffered mental disorders.

Acquittal would be disappointing

Robert Kirchhoff sees a more complex image in this case. “The Oleg Sencov case is the story of a person who has become a representative for thousands of others, maybe a whole nation. And yet, how little we know about him. This story predicated a lot,” he noted.

Oleg Sencov said he was not on hunger strike just for his own release. If he was simply freed, he would consider it a huge failure. He wants to achieve freedom for 63 other political prisoners from the Ukraine as well. Kirchhoff cannot quite understand why Sencov chose this form of protest.

“Luckily enough, I have not been through his experience, and I don’t dare to say what exactly is happening in his mind. He opted for suicide, it means he has given up on his existence. Life is the greatest value. Thus, he has given up on everything.”

French and Belgian filmmakers are now actively pointing to the threatened life of Oleg Sencov as well. As both countries made it to the semi-finals of the football World Cup, their political elite are traveling to Russia. If they meet Putin, they should bring up this issue, director Jacques Audiard and Oscar-awarded Michel Hazanavicius suggested.

The Sme daily has also addressed the Slovak Foreign Ministry, asking it – and the minister – whether they have reacted to the call of Robert Kirchhoff and his colleagues, and what was their stance towards the imprisonment of Oleg Sencov.