Sailing on the second biggest lake in the High Tatras offers spectacular views. 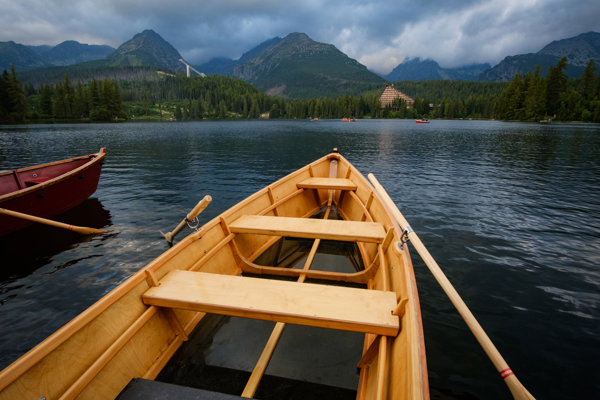 Sailing on Štrbské Pleso kicked off its 10th season this summer. This year, it is enriched by a boat with a transparent bottom.

“The village of Štrbské Pleso, where the mountain lake is situated, belongs among the most visited in the High Tatras and the tradition of sailing started to develop 145 years ago,” said Zuzana Fabianová from the Tatry Mountain Resort (TMR) company that operates sailing on the mountain lake, as quoted by the TASR newswire.

The tradition dates back to 1873 when Jozef Szentiványi, founder of the village, built a gamekeeper’s cottage at the south bank of the lake and opened a landing stage with sailing to the public. In 1984, sailing was forbidden, mainly to prevent further waste and pollution of the mountain lake.

The tradition was renewed after 24 years, on July 5, 2008. The current landing stage is anchored at the same place as the one from the 19th century. There are 23 wooden boats accessible for visitors who may use a personal sculler or borrow a wedding boat.

Last year's season was the most successful when 5,500 boats and more than 18,000 tourists took to the lake within 73 days. This year, all the plastic boats were exchanged for new wooden boats that better fit the surrounding environment.

“The transparent boat was made with an idea of using the purity of Štrbské Pleso to watch animals, plants and the bottom of the lake,” said Petra Jánošová from TMR, as quoted by TASR.

Štrbské Pleso lies 1,346 metres above sea level, is 26 metres deep and spreads across an area of almost 20 hectares. It is the second biggest lake in the High Tatras and is covered with ice almost 155 days of the year.

Tourists can enjoy spectacular views of Solisko, Patria, Štrbský Štít and Furkotský Hrebeň during sailing. The lake belongs to the 5th degree of protection so the rules are very strict here. It is forbidden to catch fish or feed ducks and other animals. People cannot take food or luggage on the boat while swimming in the lake is forbidden, too.