What does the Russian bikers’ gang Night Wolves do in the Slovak village of Dolná Krupá? 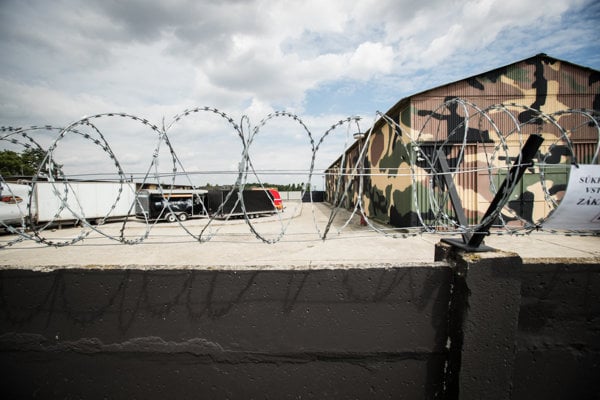 The complex painted with combat camouflage at the end of the village of Dolná Krupá caused a stir recently when the public discovered it will be the Slovak base of the Russian biker gang Night Wolves.

The Russian bikers’ gang is openly supported by the Kremlin, and according to security analysts, recruits fighters for the pro-Russian separatists in the east of Ukraine and stirs agitation with its promo rides across European countries every year.

Aerial photos disclosed that the fence, two metres tall and lined by razor barbed wire, hides an actual military base – with tanks, armoured vehicles, a tank training area, as well as a space reminiscent of a shooting range. Locals have no clue what goes on in the complex. It is owned and operated by a friend of former interior minister Robert Kaliňák, orthodox biker Jozef Hambálek.

Apart from the Night Wolves, the paramilitary unit Slovak Levies (Slovenskí Branci) also exercises at the complex. In May, they published photos on Facebook boasting they already have a motorised battalion. They deem it “a demonstration, among other things, of how serious they are about defending their homeland, and exercising.”

Police have been monitoring the situation surrounding the base, but so far, they have not intervened in any way. Secret services have not commented. The Defence Ministry has already admitted that the military equipment comes from its institute, and that it requires it to be returned.

Tanks and armoured vehicles have been supplied by the Military History Institute, which falls under the Defence Ministry, to the Museum of Historical Vehicles Trnava civic association. Its legal representative is Hambálek who allegedly wants, through the association, to open a military museum in the Dolná Krupá complex.

“It is obvious that the head of the Military History Institute, Miloslav Čaplovič, failed to thoroughly check on the background of this civic association, and thus, he exceeded his competences,” ministry spokesperson Danka Capáková wrote. 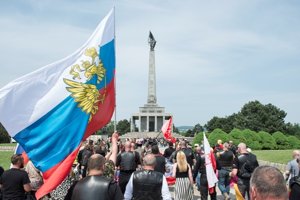 Thus, Defence Minister Peter Gajdoš (an SNS nominee) temporarily suspended Čaplovič from his position, until all circumstances are investigated. He also ordered immediate termination of the contract on renting the equipment, and that the equipment be returned.

What do security forces say?

Media and politicians have already been commenting on the establishment of the Night Wolves’ Slovak base. Asked by the Sme daily, intelligence services answered that they are monitoring the situation but cannot comment more in detail.

While the Foreign Ministry is concerned by the founding of the Night Wolves’ branch, the Interior Ministry claims they have not recorded any disruption of peace or illegal activities.

Apart from the Russian bikers’ clubhouse, Hambálek plans to create a World-War-II museum called Patriot Park near Dolná Krupá. An eponymous theme park operates in Russia, too, focusing on presentation of Russian combat equipment. Officially, it was opened in 2016. When this story was prepared, Hambálek was on holiday so Sme failed to contact him.

Where do conscripts exercise?

Besides the planned museum, however, the paramilitary organisation Slovenskí Branci also exercise here. Their head Peter Švrček confirmed that they had one gathering at the complex, as Hambálek offered to lend them the equipment he had borrowed.

Who are the Night Wolves

The oldest bikers’ club in Russia appeared in 1989. It has around 5,000 members and is currently led by a friend of Russian President Vladimir Putin, Alexandr Zaldostanov, nicknamed "The Surgeon". Despite their claim to be an apolitical organisation, they actively support Putin, and are in contact with him. They organise propaganda rides across Europe, officially to hail the victims of World War II. Some countries, like Poland, have banned them from entering their territory. According to security analysts, they recruit fighters in Ukraine to join the pro-Russian separatists.

We didn’t know the equipment was borrowed illegally – but that is none of our business,” Švrček claims. Branci have been operating in Slovakia for several years already, and present themselves as an apolitical organisation that teaches people self-defence.

They openly stand against the NATO and European Union, but police have failed to prove they could commit anything illegal. Some members of the group held speeches in the past at the celebrations of the war-time (Nazi) Slovak state. In the documentary on Slovenskí Branci, called Keď príde vojna (When the War Comes), released this year by director Jan Gebert, Švrček openly declared his interest in joining politics.

On the afternoon of July 19, a pick-up with two men was driving in front of the complex’s fence near Dolná Krupá. One of them was driving, the other one attached papers that said "No Photos" on the wired fence. They refused to give their names, only introducing themselves as the museum’s employees.