Meanwhile, a Slovak MP leaves on a previously announced trip to the annexed peninsula.

Slovakia’s Foreign Affairs Ministry does not recognise the results of the illegal referendum in Crimea held in March 2014, in compliance with the common position of the EU member states and NATO.

“The annexation of the peninsula by the Russian Federation has violated the basic principles of international law and breached the sovereignty and territorial integrity of Ukraine,” reads the statement published on the Foreign Affairs Ministry’s website. “The Slovak Republic still considers Crimea to be Ukrainian territory within its internationally recognised borders.”

The ministry stressed that one of the priorities of its upcoming chairmanship of the Organisation for Security and Cooperation in Europe (OSCE) is to focus on solving the conflicts in Ukraine.

The publication of the statement coincided with the announced visit of Slovak MPs to Crimea. Although the initial reports suggested that deputies from the ruling parties Smer and the Slovak National Party (SNS) planned to attend the trip, in the end non-affiliated MP Peter Marček was the only politician to leave Bratislava airport on July 31.

“It’s up to them how they will decide,” Marček said prior to his departure, as quoted by the Sme daily. “They will either come or not.”

He was accompanied by former head of the Slovak Information Service (SIS) intelligence agency, Igor Cibula, a group of about 10 entrepreneurs and two journalists: former cameraman of the public-service broadcaster RTVS and owner of the Sity radio station, Rastislav Lehotský, Sme wrote. 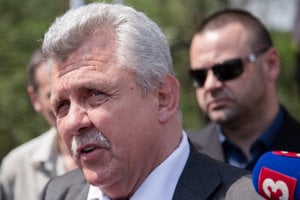 Marček, who made it to parliament on the slate of Boris Kollár's Sme Rodina party, has refused to say which politicians originally planned to visit. When speaking to the journalists before boarding the plane, he seemed disappointed. He told the media that they obviously won, as Sme reported.

Disputes within the coalition

The announced visit to Crimea raised critical responses two weeks ago, also within the ruling coalition. Even though Marček stressed it was a private trip, Most-Híd said that it was unacceptable for MPs to go.

Neither Smer nor SNS officially knew about the plans of their members to participate, Sme wrote.

The only way to Crimea leads through Moscow. The flights are operated by Pobeda airlines. It is necessary to spend one night in Russia and then travel to the annexed peninsula, Sme wrote.