Summertime: cool down in a gallery near the Danube

Four new exhibitions are sure to lure Bratislava residents and visitors of the Slovak capital to the unique modern art museum complex on the Danube island. 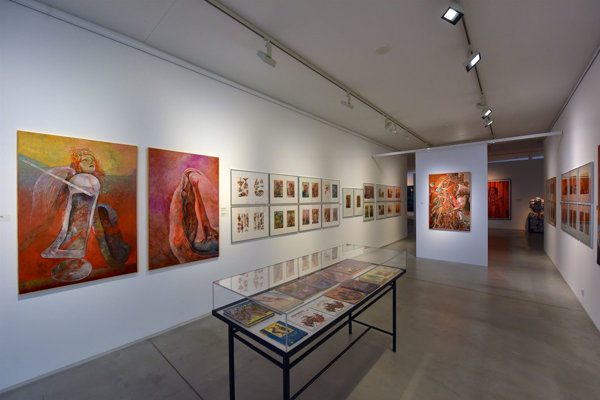 Perhaps the smallest of the four new offerings in the Danubiana art museum, but equally attractive and important, is the exhibition presenting works of renowned Slovak graphic artist and illustrator, Dušan Kállay, to mark his 70th birthday. (Head of Danubiana and co-founder,Vincent Polakovič, jokingly suggested Kállay was celebrating his 50th birthday).

Kállay is well-known not only among Slovak readers and art lovers but his reputation has crossed borders. He has been awarded several prizes, e.g. the Grand Prix from Biennale of Illustrations Bratislava twice; H.Ch. Andersen Award (1988, Oslo); UNICEF award; Grand Prix at VIPA, Vienna (2009, 2012); and the Grand Prix de l’Art Philatelique, Brussels (2011); Grand Prix 150 Years of Alice v Grobier Club, New York (2015), as well as the prize for the Best Postal Stamp of the World. 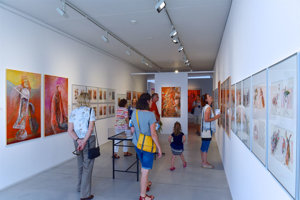 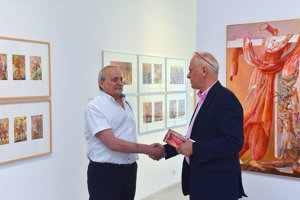 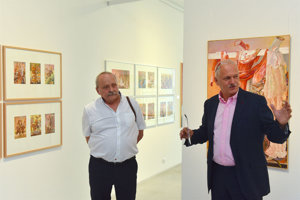 The Danubiana exhibition (lasting only until August 15) is called The Magical World of Colours and mostly presents his appraised illustrations but also some larger works. At its opening, Kállay quoted from one of the books he illustrated, Alice in Wonderland, and said that the world is not the way it is – and this is only the more true about books and their perspectives which are expressed in illustrations. And it is illustrations that uplift some books to a higher level and make it impossible to read them in electronic form, as one would miss out on a very important aspect of what the books can offer – the imagination. 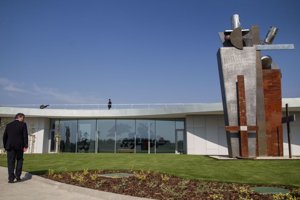 “I live my life on the border that separates dream and reality,” stated Kállay, summing up his artistic work, as quoted in the Danubiana leaflet accompanying his presentation.

Another Slovak artist on offer during the summer is Patrícia Koyšová, whose big-sized paintings were curated in the Danubiana exhibition by Gabriela Garlatyová. Its name, Zoom, suggests that the artist offers “other-than-usual” sight and focus, while also using extraordinary instruments like a mop or air. 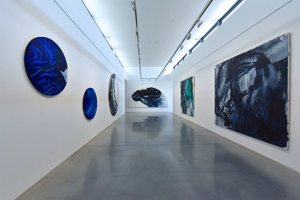 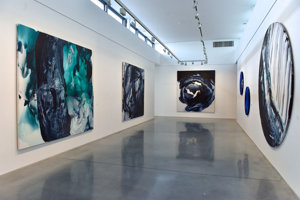 “Lines and spots are fixed final shapes left from the impact of splattered, blown away, poured or pressed out paint,” the Danubiana leaflet reads, continuing that “they are the reason why the painting is created. A similar situation to the unstable focal point paradox, which is changeable, is the situation with the paradox of the spatial illusion of her painting; when close, items seem to be distant and the small seems to be enlarged.”

Not just Slovak visual artists can be seen in the museum of modern art built on an artificial peninsula on the Danube river close to Bratislava - there are also two summer exhibitions of foreign works. 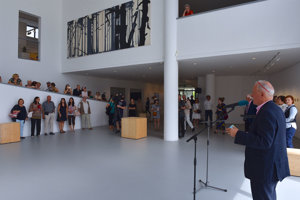 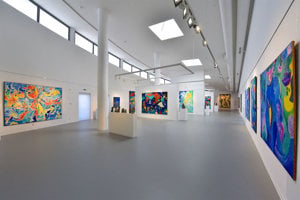 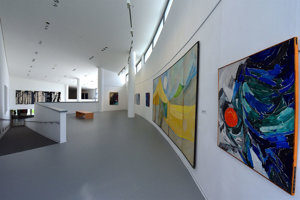 The works of a Danish member of the Cobra artist group, Carl-Henning Pedersen, represent the core of his country’s 20th century art, while its experimental character has ensured its pioneering importance and connection with European avant-garde. The works of his partner Else Alfelt are shown in Danubiana as well, in the Artistic Couple exhibition curated by Lotte Korshøj, who personally took part in the opening on June 16. This exhibition, probably the biggest of these four by sheer extent, lasts until September 2 (as does that of Patrícia Koyšová).

Reaching out to visitors

This Exhibition Has an Utopian Superfluity is the name of the exhibition by Austrian multi-genre artist Markus Huemer, whose works in Danubiana include large as well as smaller works, and a video. His creation combines traditional and modern forms as well as a well-established method in the digital era. In the Bratislava exhibition, four individual parts can be found, with one of them being wooden miniatures on the walls symbolising the digital essence being transformed in painting and then miniaturising. Through a computer, so-called over-painting is born. 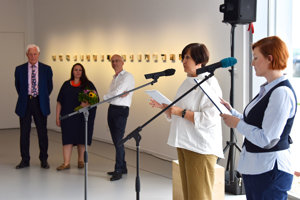 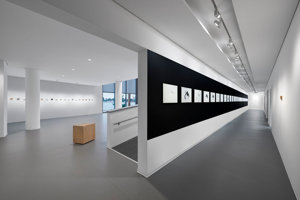 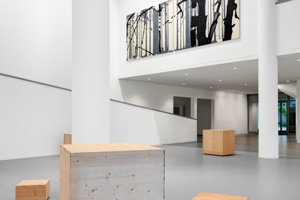 The second part shows 28 imaginary phases of the hidden part of the Moon. Scientific digital stylisation is completed with distorted portrayals, in which “the fundamental elements of the painting have evoked the fights of the world”, according to Lenka Krčmárová, who provided updates on the artist and his exhibition. The last part, Black Boxes, is an answer to the “white cubes” phenomenon, used frequently in exhibitions. They are meant to provoke viewers and pose questions which may have several different individual answers.

The four current exhibitions can be seen in Danubiana every day except for Mondays, and at the weekends, visitors can sail to the museum on a boat from Bratislava harbour.