The parliamentary foreign affairs committee recommended Slovakia does not attend the conference in Marrakesh. 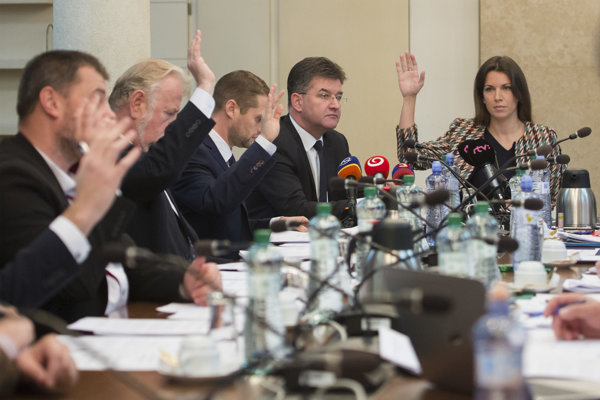 The UN global compact for migration discussed in the session of the Foreign Affairs Committee. (Source: TASR)
Font size:A-|A+3

The government should not agree with the UN Global Compact for Migration, as stems from the resolution adopted by the parliamentary foreign affairs committee. It also says that Slovakia should not be present in Marrakesh when the UN votes on the migration pact, the TASR newswire reported.

The MPs should discuss the resolution at the upcoming session and vote on it. The resolution does not ban Slovakia from attending the conference in Marrakesh since it is only a recommendation.

However, Foreign Affairs Minister Miroslav Lajčák (Smer nominee) proposed to MPs that Slovakia should participate in the conference and issue a statement that it understands the migration compact, TASR wrote.

Slovakia should be at the table

In Lajčák’s opinion, it makes no sense talking about reservations from home.

“If you are not sitting at the table, you are on the menu,” he said, as quoted by TASR.

If present at the conference, Slovakia could explain how it understands the pact, he continued.

“Slovakia has always reserved and still reserves the right to define its legislation concerning migration,” Lajčák said, as quoted by TASR, adding that Slovakia has an opportunity to stress at Marrakesh it sees the pact as a list of proposals, which may or may not be implemented.

The proposal was only supported by Katarína Cséfalvayová, MP for Most-Híd.

Committee: Lajčák did not communicate the pact

The countries, which are final destinations for migrants, distance themselves from the pact, said Jaroslav Paška from the Slovak National Party (SNS) during the foreign affairs committee’s session. This indicates that something is wrong, he added.

The MPs for far-right People’s Party – Our Slovakia (ĽSNS), Smer, and Freedom and Solidarity (SaS) agreed with Paška.

They also blamed Lajčák for not communicating the pact with them.

“If you invite me just today, do not blame me for coming in so late,” Lajčák responded, as quoted by TASR, adding that the draft pact was available online, and MPs could have downloaded it anytime.

Pact will be adopted anyway

MPs have asked the government to take all measures that can prevent Slovakia from accepting the pact at Marrakesh.

Lajčák explained to MPs this will not be possible as the document is to be adopted at the inter-governmental conference.

“The document will be adopted without the vote, thus by consensus,” Lajčák said, as quoted by TASR, adding that the delegations attending the conference will not sign anything.”

As many countries support the pact, it will be adopted either way, the minister told MPs.

In 2016, 193 countries within the UN agreed on adoption of the migration pact to help manage migration better. The document underlines countries are free to create their own migration policies.