He fled from Czechoslovakia twice

John Palka wants to share the little-known story of Slovakia with a wider audience. 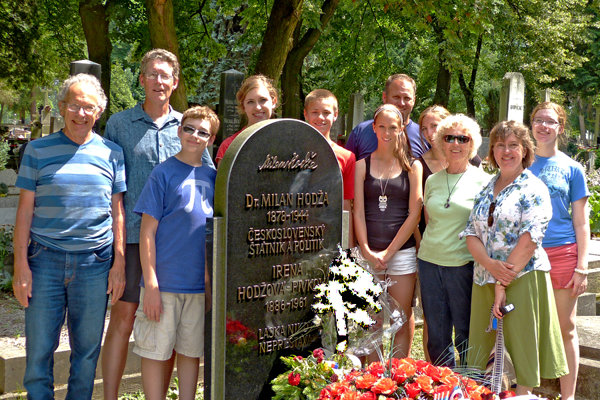 “My uncle inscribed the book with these simple words: “To Johnny, so he won’t forget.” Needless to say, I have not forgotten!”

John Palka, or Janko Pálka for Slovaks, is an American retired biology professor specialised in neuroscience at the University of Washington. His grandfather was Milan Hodža, the prime minister of Czechoslovakia during the turbulent years of 1935-1938 and his great-granduncle was Michal Miloslav Hodža, leading member of the Štúr generation. He wrote a book on his family tree, his ancestors and Slovakia.

In this interview, John Palka talks about:
- His family history and how he ended up in the US
- How he learned about his family roots
- How he researched the history for his book
- The life of the Slovak community in the US

The Slovak Spectator (TSS): You wrote on your website that you are a two-time immigrant.

John Palka (JP): That’s right. I have been an immigrant to the United States twice, and actually also a refugee twice. This came about because the lives of my family were swept up in two of the 20th century’s greatest upheavals, World War II and the Communist era.

TSS: How did your family end up in the US?

JP: I was born a refugee in Paris in 1939 because our family was under threat from Hitler. My mother’s father, Milan Hodža, had been the prime minister of Czechoslovakia during the turbulent years of 1935-1938. Hodža’s government finally resigned about ten days before the signing of the Munich Agreement by Britain, France, Germany, and Italy, which basically handed Czechoslovakia to Hitler. Not long after Munich, both Hodža and the president, Edvard Beneš, went into exile.

Hitler soon annexed the Czech lands as the Protectorate of Bohemia and Moravia. He let Slovakia declare its independence, but it was a de facto German puppet state. Under the circumstances, it would have been dangerous for Hodža’s family to stay in the Nazi-controlled territory. My mother was the last to leave. She was able to get an official permit to leave Slovakia, but of course, actually being let across the border required that the permit should be honoured by the guards on the train from Bratislava to Geneva. Fortunately, all went smoothly. Soon thereafter, my mother reached Paris, where she gave birth to me. But the timing was very stressful—I was born just two weeks after she arrived in Paris. Imagine a mother making such a journey while being eight and a half months pregnant!

TSS: What about your father?

JP: He was not with her. I did not understand for many years why he had stayed behind in Slovakia. Ultimately, I found out that he had been engaged in the anti-Nazi resistance, a thrilling story of its own. He joined us in France about nine months later.

In June 1940, shortly before my first birthday, the Nazis overran France. We were trapped in occupied France for about a year, travelling on forged Yugoslav documents and trying to stay out of the reach of the Gestapo. This worked until one day we were given orders to report to the nearest Gestapo headquarters within 48 hours, and to bring with us one suitcase apiece. This, of course, was the archetypal first step in being carted off to a concentration camp. We managed to evade the Gestapo, and within weeks my parents and I were smuggled across the border into Free France by the French Resistance. We made it to American soil in December 1941.