Volkswagen Bratislava restricts production due to the strike in Hungary

If the strike continues for a longer period of time, the production of some vehicles in the Slovak capital might be stopped completely, analyst predicts. 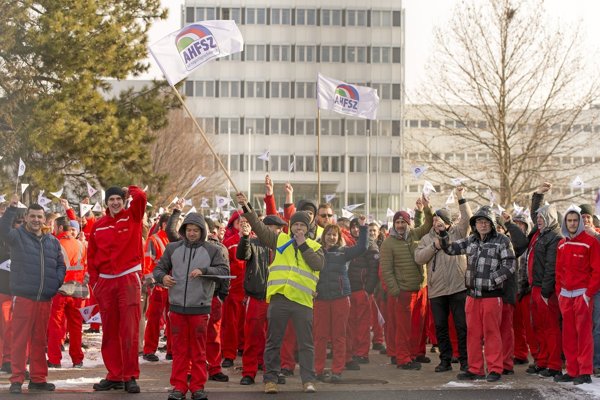 The strike of Hungarian workers at the Audi car plant in the city of Győr in Hungary has affected several of Volkswagen's car plants in Europe, including the one in Bratislava.

The production at Audi Hungaria has been paralysed for several days now as 9,000 out of 12,000 workers demand higher wages, the Sme daily reported. Audi Ingolstadt has already suspended its manufacturing process because of the strike.

"If the strike continues much longer, the production of some car brands at Volkswagen Bratislava could be halted completely," said analyst Boris Tomčiak of the Finlord company, as quoted by Sme. Tomčiak adds that the stocks of engines at the Bratislava plant are low due to cost savings.

The German car producer manufactured more than 400,000 vehicles in Bratislava last year, the highest number of all car makers in Slovakia.

However, Volkswagen Slovakia will not be producing SUV cars, including Volkswagen Touareg, Porsche Cayenne and Audi Q7, during weekends and a four-shift schedule will be reduced to a three-shift plan, also a result of the strike in Hungary.

In addition, the car plant will reduce its production of small cars within the New Small Family project, including Škoda Citigo and Seat Mii, Sme wrote.

The Bratislava car plant has already introduced limits on its production from January 2019 due to the deceleration of China's economy and a drop in Germany's industrial production.

In the case of a strike on the side of suppliers, car plants usually prepare for such a scenario in advance by changing its production plans or purchasing higher amounts of supplies before the strike, analyst Martin Jesný of Revue Priemyslu magazine said.

"They prioritise the production of cars whose engines they have in stock," Jesný added, as quoted by Sme.

The strike at Audi Hungaria began on January 24. Trade unionists demand an increase in their wages by 18 percent, not less than €235, though.

"It is very likely that the Audi Hungaria management will meet the trade unionists' demands and raise wages by at least 10 percent," said Tomčiak, as quoted by Sme.

The average monthly wage at Audi Hungaria is now €1,300.