Merkel awarded for developing relations between Slovakia and Germany

The German chancellor arrived for a one-day visit to Bratislava to attend the V4 summit. She was presented with a state decoration from the president. 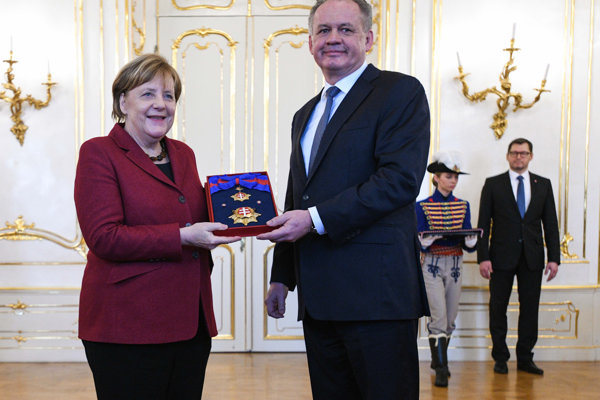 Business relations and the 30th anniversary of the fall of communist regime were among the main topics discussed during the visit of German Chancellor Angela Merkel to Slovakia on January 7.

She visited Bratislava upon the invitation from PM Peter Pellegrini (Smer) from last May, and attended the summit of the Visegrad Group (V4) countries.

“Germany is the most important trade market for Slovakia, so it is logical that the key interest of our country is to have good relations with Germany,” Pellegrini told the press conference held after his meeting with Merkel.

Apart from business-related topics and the anniversary, the two also talked about the potential placement of the European Labour Authority’s headquarters to Slovakia. The country currently belongs among those without any headquarters of a European institution situated on their territory. 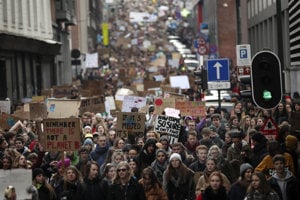 Read also: Message to Angela Merkel: Europe can save the world Read more

Merkel expressed her support to the idea of placing new agencies into new member states.

Later that day, Merkel also met with President Andrej Kiska, who presented her with the Order of the White Double Cross, the highest state decoration of Slovakia conferred only upon foreign citizens. She received it for outstanding merit in developing relations between Slovakia and Germany.

Murder and abduction mentioned, too

As for political topics, the two politicians discussed the case of Vietnamese businessman Trinh Xuan Thanh, who was kidnapped in Germany and transported to Vietnam through Slovakia, also using the country’s governmental plane.

“Yes, we briefly discussed that, too,” Merkel told the press. “I don’t have any doubts that Slovakia is doing everything to investigate this abduction.”

The investigation teams are collecting evidence, Pellegrini added. As he said, the potential culprits have already been taken into custody. He stressed that the situation in Slovakia is stable and asked for letting the investigators work.

Since Pellegrini mentioned freedom of press, it is possible that he discussed the investigation of Ján Kuciak and Martina Kušnírová's murders with Merkel, the Sme daily reported. 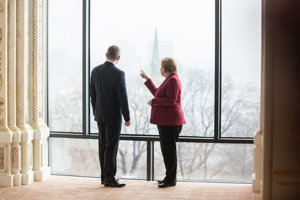 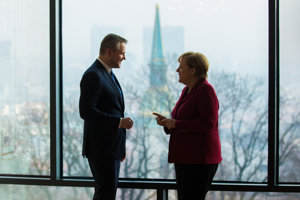 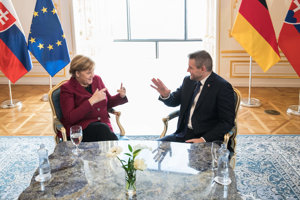 European topics on the table

Business-related topics and the anniversary were a subject of discussion during the V4 summit, at which Merkel met with Andrej Babiš (the Czech Republic), Viktor Orbán (Hungary) and Mateusz Morawiecki (Poland).

“The fundamental changes in 1989 brought freedom and development to our countries, and enabled us to contribute to the European integration process,” Pellegrini said, as quoted by Sme. “This is why we adopted a joint declaration to remember the importance of these changes for the central European region.”

As for other issues, the participants agreed on launching a joint project in Morocco in the following months, to help stop migration to Europe, Pellegrini said, adding that they will introduce details later.

“We recognise Schengen, which is why we need both legal migration and border protection,” Merkel said, as quoted by the Sme daily.

To achieve controlled migration, it is necessary to maintain good relations with neighbours, one of which is also Morocco, she added.

Conflicts with Hungary and Poland not discussed

They also discussed the use of EU funds, with the German chancellor praising the V4 PMs for their efficient use in increasing the living standard in their countries. Concerning the new EU budget for 2021-2027, she stressed that it should contain the least bureaucracy possible and the most funds possible to build strong economies. She hopes the countries will agree on the final version of the budget despite their current differing opinions, as reported by Sme.

The German chancellor talked about the Nord Stream gas pipeline project, stressing that it is necessary to ensure that Ukraine remains a transit country and diversify sources. She also discussed Ukraine with Russian President Vladimir Putin.

“We don’t want to be dependent on Russia, but Russia was a source of natural gas already during the Cold War,” Merkel said, as quoted by Denník N, adding that this will likely not change.

Babiš and Orbán told the press that they discussed the future of the EU after the upcoming EP elections. The change will depend on the voters.

The V4 prime ministers and Merkel did not talk about the violations of rule of law principles in Hungary and Poland. This is the subject of talks between the member states and the EC, Merkel said, as reported by Denník N.