The average wage was realised mostly by the capital and its surroundings.

The average nominal monthly wage in Slovakia amounted to €1,013 last year, up by 6.2 percent in annual terms. The real monthly wage rose by 3.6 percent year-on-year after taking price increases into consideration, the TASR newswire reported.

As a result, the nominal monthly wage exceeded the €1,000-threshold for the first time in the country’s history, said František Bernadič of the Statistics Office. 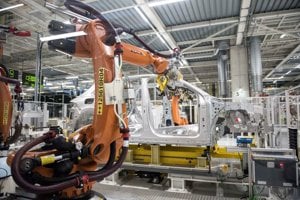 From a regional point of view, the average wage is realised mostly by the capital and its surroundings, which is proven by the fact that the Bratislava Region was the only one where the average monthly wage exceeded the threshold. It amounted to €1,272.

The Trnava and Trenčín Regions were lacking €50 in order to cross the €1,000 threshold, TASR reported.